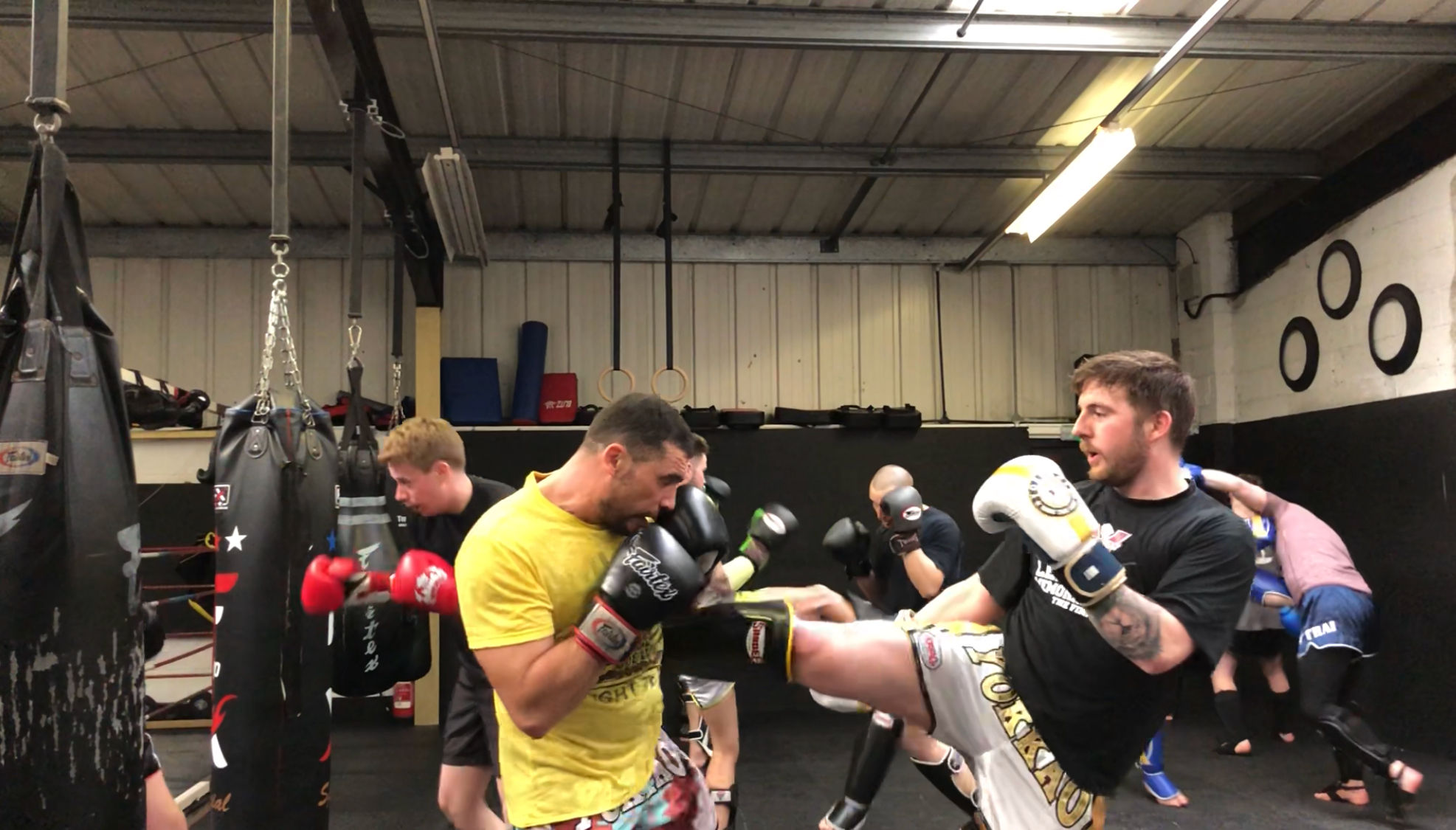 Saturday’s down at Northern Kings are the place to be if you fancy a good kicking. You have a 10 am class where the hour is spent working on technique and the second hour is sparring. That’s right. A whole hour session dedicated to getting punched and kicked in the face until you’re blowing out of your arse (going to happen anyway) or bleeding from every facial orifice… or both.

To start the day, it began with a journey over to Northern Kings, unbeknownst to me that I had forgotten to pick my equipment bag up. My gloves, shin pads, gum shield, change of clothes, towel everything was left sitting by the door. I managed to salvage a change of clothes and a towel from the car but I was without my training gear. I only came to realise this when it was waaaaaaaay too late. By too late, I mean I was at the gym. Sweatbox it was.

Everyone knows of the sweatbox in the gym. That smelly area that is home to the old gloves and shin pads that people have either donated, left of discarded for people to use who don’t have their own equipment. Or… for people like me who forget it.  Ah well, I wasn’t too bothered. I just had to get on with it.

It was an awesome session on Saturday. We worked on the teep in the first hour, keeping the distance and working on keeping your opponent at range. That was fun, I like to use the teep. It is a good solid tool. I like to be active on my front leg, the left kick comes quite quickly, quite naturally so I use it frequently. I’ve really been working on getting my right leg off a bit more.

Having more faith in its ability and speed to get back to defend but more on that later. After working the front leg for the class, it was on to the fun stuff. Sparring. I love the classes, I love learning and challenging the brain and concentrating on what it is doing are doing. Fine-tuning the skills and drilling it making it second nature.

I also love tuning out and hitting something/someone. We did 10 rounds and it was absolutely glorious. I loved every second of it. Yeah, other than the dodgy gloves and shin pads I was wearing it was really good. It was the first time I have sparred and felt really comfortable.

Two rounds of the 10 stood out to me the most. Jack Bullock. I am currently sat on Monday evening with a lump on my eye because of one of the Northern Kings fighters, Jack Bullock. I started training around the same time as Jack and he is currently sitting at 6 fights and 6 wins. He came into the gym, kind of what I’m like now. Maybe not quite as big but he was much bigger than he is now, that’s for sure. He recently fought Jack Sampola on the Home Show and stopped him.

I felt comfortable with Jack, we were exchanging quite nicely, and I was letting my right kick go with half decent power. Craig was watching and giving us both tips throughout the round. I wasn’t too gassed, and I felt quite strong and active during the first of our two rounds. Ended up that he was chasing me getting quite ‘frustrated.’ It ended with me feeling really good and strong and quite pleased with the way that the round went overall.

It was the end of the round and it was time to switch partner, after that round had finished he said he wanted me in the last round. Then I got worried. I tried to take it easy in the next round knowing what punishment I had in store the round after. Anyway, the bell rang and off we went.

It started okay for me, not as good as the other round but I wasn’t doing badly. A minute into the round it all shifted. Jack was hunting me down. Landing big hands, putting the pressure me, I just keeled. Gave in. He took advantage and landed some very big shots. I was trying to move out of the way, but my lungs and legs just weren’t working enough to escape the flurry of attacks coming my way.

He got me with a big right hand just above my eye and near the side of my temple. It’s the first time that I’ve ever seen stars, but I just wanted to carry on and make it to the end of the round. As you do, when the bell rings, I threw my arms up and did a Rich Flare “wooo!”

I was very happy to see the end of the round, we thanked each other and compared how it was for each of us and said we look forward to the next one. Jack is of a similar size to me and I know that I can let go a bit without actually hurting him too much. He seems a good fit for a sparring partner. I can’t wait until I am fit and can keep up with the fighters through the rounds. I will be lighter on my feet and be able to be more active throughout.

That’s what Craig said to me, “you just need to be more active Dom.” But yeah. That was Saturday. It was such a good time! I had a brilliant time in there with everyone! Every round is bettering myself. Moving forward, sweating out the badness and learning and growing. Fat Lad will be a fighter. It’s something I’ve never been so sure of!