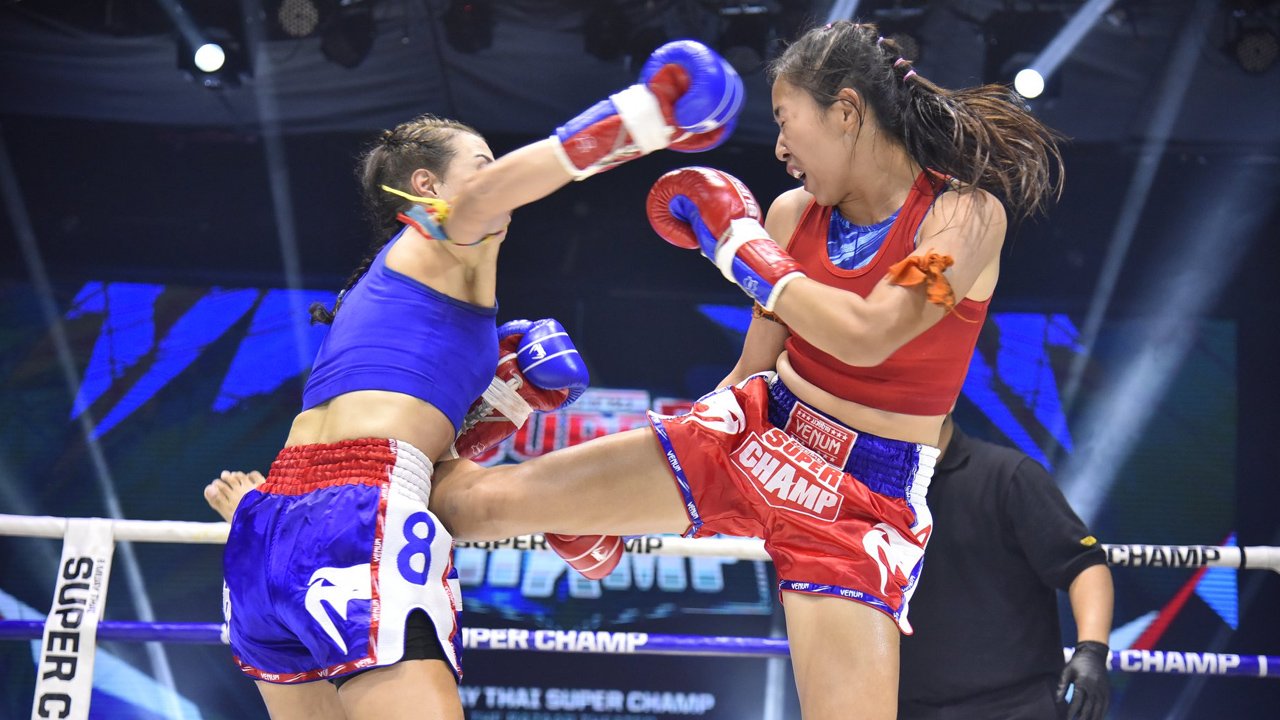 This Sunday, Muay Thai Super Champ returns to the Bazaar Theatre in Bangkok, Thailand. The weekly event, which streams on Channel 8, is set for it’s second live event of 2021.

Muay Thai Super Champ and sister show Muay Hardcore have been known for hosting some top female Muay Thai fights. During 2020, some female bouts even made main event slots; proving that female Muay Thai is on the rise.

This weekend sees another two female Muay Thai fights scheduled on the seven-bout fight card at Muay Thai Super Champ. Kwanjai Sor.Tawanrung, Barbara Aguiar and Nongbew Tor.Thepsutin are all regulars of the weekly events in Bangkok. Scottish fighter Judy Humber is the newcomer set to make her Super Champ debut this Sunday.

Brazilian female Muay Thai fighter Barbara Aguiar became a regular on the weekly Channel 8 events during 2020. Her resume consists of victories over Petchgannya, Kulabkem and Jompthap. She most recently earned a draw against Nongbew on Muay Hardcore in December.

Her opponent, Kwanjai Sor.Tawanrung is also a regular at Muay Hardcore and Muay Thai Super Champ. The Thai is also a former opponent of Barbara’s Phuket Fight Club teammate Mariana Scombatti. The pair battled out a draw on Muay Hardcore back in October last year.

Nongbew is arguably one of the toughest female Muay Thai fighters in Thailand. The WPMF and WMC Muay Thai World champion has beaten the likes of Jada Ketley and Teresa Wintermyr. She suffered a loss to Brooke Farrell and draw against Barbara Aguiar in the latter part of 2020 however.

Her opponent Judy Humber is set to make her Super Champ debut this weekend. Since arriving in Thailand in 2020, the Scottish female fighter from Aberdeen has won three straight. Most recently, she defeated Maisha Katz for the Thapae Stadium title in December.

Judy, who now trains at Lanna Muay Thai in Chiang Mai, will make her way south to compete in Bangkok for the first time. With less than 10 bouts in her early career, she gives away a lot of experience to her opponent, but her recent performances has shown she is ready for the challenge ahead.

You can see both female Muay Thai fights live and free on the Muay Thai Super Champ YouTube and Facebook. The show starts at 7pm local / 12pm UK time on Sunday 14th March.