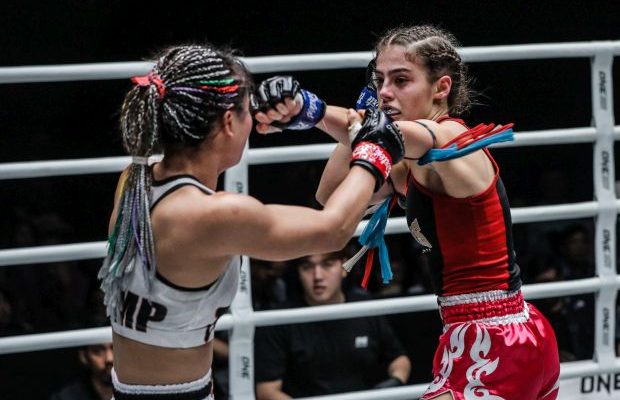 As well as that, ONE Championship Featherweight Kickboxing World champion, Giorgio Petrosyan returns to to Europe to compete for the ISKA World title in his adopted home country of Italy.

Here’s three bouts we’ve selected that are happening this weekend which we think you should definitely not miss.

After an initial ONE Championship debut scheduled back in August was delayed due to medical conditions, Scotland’s Chris Shaw will make his eagerly awaited debut at ONE: FIRE & FURY tomorrow.

He face will the ‘man of steel’ Rodlek PK.Saenchaigym, who gets his nickname from his inhuman ability to withstand punishment by his opponents.

Can the high-flying Scottish star do the unthinkable and stop Rodlek in his tracks or will he fall short like to the Thai phenom like his compatriots have previously?

Australian Muay Thai star and WBC Champion, Alma Juniku, will make her second appearance in the ONE ring this Friday. After losing a narrow decision in her debut against multiple-sport champion Stamp Fairtex, she is determined to get back to get back into title contention.

Standing in her way is ONE Championship debutant Anne-Line Hogstad, who will be making her 50th career appearance when she faces Juniku in Manila.

The tough Norwegian is also coming off a loss, after a narrow defeat to Scotland’s Rhona Walker in her last bout, and will be eager to impress on the big stage on Friday.

Considered the greatest kickboxer of all time, Giorgio Petrosyan has lost only two bouts in his 100+ fight career and recently won the ONE Championship Featherweight Kickboxing Grand Prix, beating Frenchman Samy Sana in the final of the eight-man tournament.

The pair will face off for the ISKA World title at Petrosyan Mania in Milan, Italy on Saturday night.