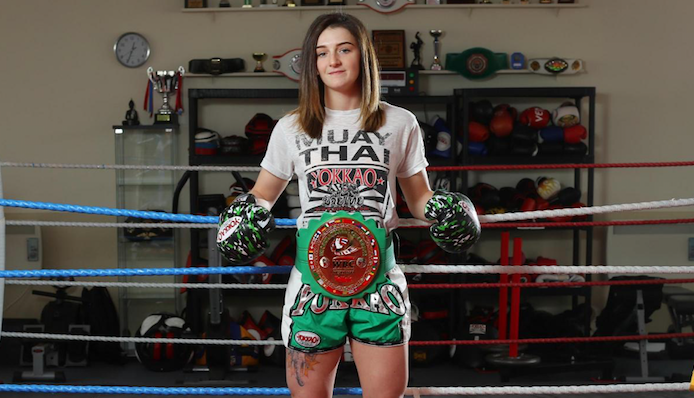 Amy Pirnie is one of the most ferocious female fighters to ever be produced from the UK. Having been around for a long time and fought the best of the best on the biggest stages, Pirnie ventures to Newcastle next week to fight on one of the biggest, most exciting kickboxing promotions in the world.

As we all know, 9th June sees the return of Enfusion to the UK after a 5-year hiatus. Delivering a fantastic night of kickboxing action, Pirnie will be featuring on the main called, Enfusion Live. Fighting a tough Swiss opponent, Aline Seiberth.

Pirnie speaks to Fight Record about the upcoming bout, adapting her methods for Enfusion rules and who she is most looking forward to seeing fight next week too!

FR: How do you feel about fighting on the main card for Enfusion Live?
Amy: Very excited, obviously it’s a very big and well-run event. It’s brilliant to be fighting alongside some of the big names in Britain, especially the other girls.

FR: What do you know about your opponent, Aline?
Amy: I don’t know much about her except for watching some of her fights. She seems good, a well-rounded fighter and I’m looking forward to a new challenge.

FR: How has camp been for you?
Amy: Camp has been good, I train hard for every fight and this isn’t any different. As always, some injuries cropped up, but they are dealt with and I’m ready to go!

FR: Have you made any special preparations for this fight?
Amy: Well the rules have changed from the normal for me, so we have adapted pad work and sparring in terms of tempo and working around the Enfusion scoring system.

FR: What do you think it does for the UK having such big promotions landing back on our shores?
Amy: Enfusion Live brings a lot of publicity to K1 in Britain and the card definitely shows off the UK’s finest talents.

FR: Which fight are you most looking forward to seeing?
Amy: Iman Barlow probably, she always puts on a show and makes for an exciting fight. She’s certainly one of the most inspiring female athletes of our sport. I’m good mates with Leif Taggart and he’s an amazing talent, I’m really excited to see him in action. Overall, I reckon all fights are going to be pretty explosive and the whole show is worth a watch!!!

If you would like to support Amy in her upcoming bout then go to www.enfusionuk.eventbrite.co.uk and enter promo code ‘PIRNIE’ at checkout to be awesome and show her you care.

All the best to both fighters. Keep your eyes peeled at Enfusion and if you see a black or red t-shirt around, come and say hi!