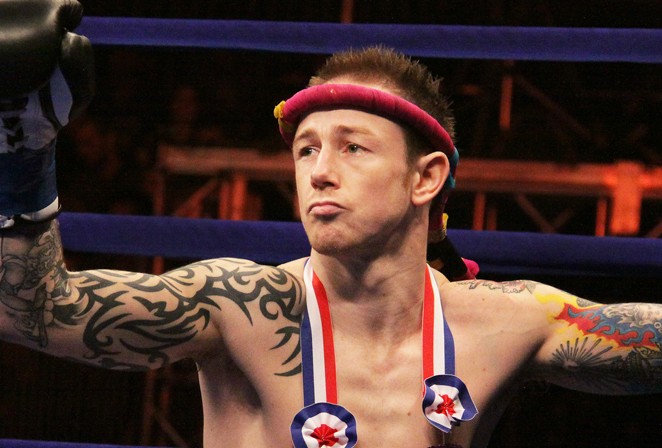 Just a few short months ago The Punisher, Andy Howson (78-13-1) of Bad Company gym, announced his return to the ring three years after retiring. After three years out of the ring, the Punisher returned in style at HGH Promotions.

Since retiring in 2015, Andy Howson spent his time teaching at Science of 8 Muay Thai in Birmingham, running seminars and teaching all over the world in such places like Italy, Australia, Japan, America, Norway and Canada to name a few. After moving back to his hometown of Leeds last year, Howson decided it was time to lace up the gloves again.

Fighting back in his hometown for the first time in eight years, Howson said, “I’m really excited about fighting in my hometown again. When I moved away to Birmingham four-years ago I was set to headline Liam & Clint’s HGH show then and it was going to be a send-off for me.”

He went on and said, “I trained the hardest I had in years and was in great shape, ready to put on a display for my friends, family and fans.  In the end, my original opponent pulled out on the night of the weigh-in, so I had accepted a replacement who was 7kgs heavier and on the day.

“I was left without a fight because he decided not to show up. I’d sold over 100 tickets all my mates, family and gym family. They never got to see me here in Leeds one last time and it’s haunted me ever since.”

Howson’s return was against Italian Gianpiero Sportelli, who hails from the small coastal town of Monopoli, Italy on the Adriatic Sea. Sportelli began training in Muay Thai in 2004 and had his first professional match in 2009. Since then, he has had 25 professional fights with 16 wins, 8 losses and 1 draw. Sportelli has won various titles and belts in several countries, including Italy, UK, Ukraine and Mexico. In 2010, he not only won the Italian Kickboxing Pro Champion, he also won World Champion Kickboxing WFF.

The night was cut short for Sportelli, though, as home favourite Andy Howson dominated with his aggressive style, working the left-hook to the body and low-kick, eventually dropping his opponent with a head kick in round two.

The referee waved off the fight before the count and the Punisher earned a stoppage victory in front of a home crowd that he’d been wanting for years.