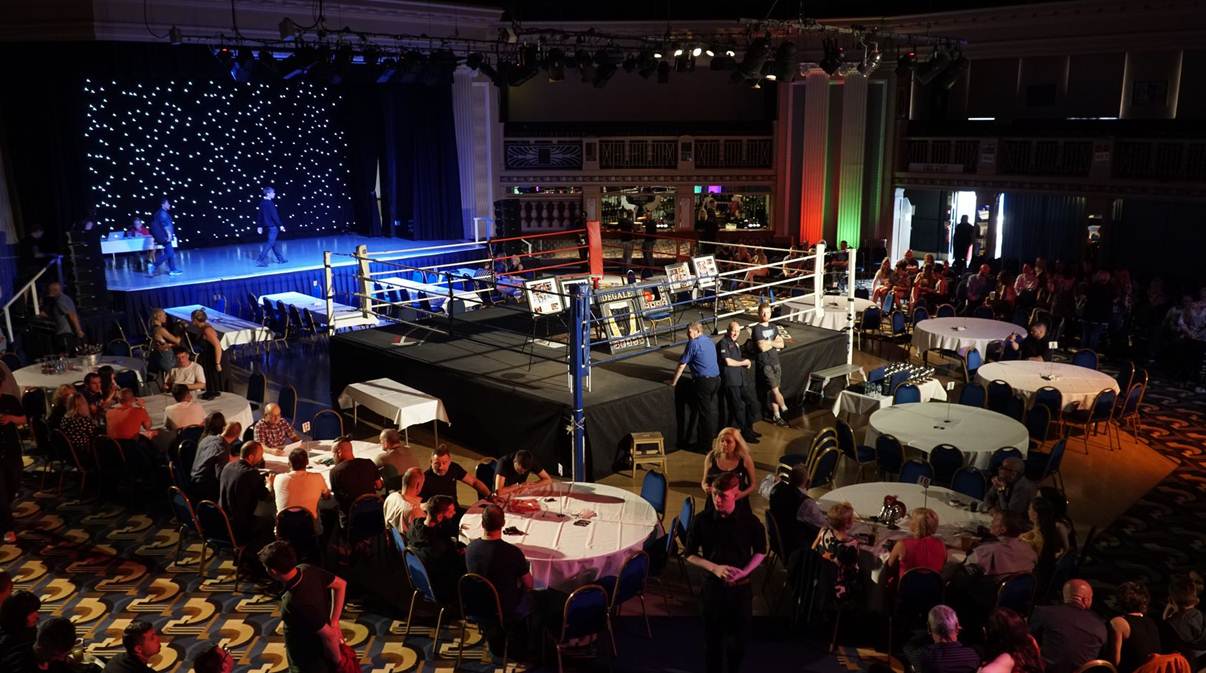 Ballroom Blitz took place in the icon Beach Ballroom located in the Scottish city of Aberdeen. Steeped in history this venue is home to all the most coveted combat sports events in the North East of Scotland. Keith Middleton, the promoter of Ballroom Blitz spoke with Fight record about Ballroom Blitz 5 and how the event ran.

With pull-outs plaguing the UK at the moment, Middleton mentioned how lucky he was not to have suffered the wrath with only a couple of junior fights that he needed to replace. With 12 fights taking place on the night, efficiency is what Middleton tries to accomplish at his events. He does this by not having huge wait times between fights keeping the crowds entertained.

Knowing that the customers are there to see fights, having a constant flow of them is important to him. Matching evenly, without having clear dominant fighters, means that the fights generally go the distance. With only three stoppages in the whole night, it is a clear sign that the fighters were well matched together and could showcase their abilities in the Beach Ballroom.

With a medical team, judges, runners, MC and more by his side for the event, in this fifth installation of the Ballroom Blitz, Middleton had expressed his gratitude and thanks to everyone who helped him on the day because last year, he didn’t feel as though it was as successful. With the ever-growing popularity of the sport and the return of the bigger events to the UK recently, having the grassroots events are now, more important than ever.

It was clear from talking with Keith that he just wanted to give the local lads a stage to perform on. That he wasn’t in it to make money. He said that there are a couple of fighters to watch out for at the moment from Aberdeen Combat Centre. Owen Trykowski and Pete Scott. Owen has been going from strength to strength recently, featuring on big events in the UK like Yokkao, HGH Promotions and many more! Unfortunately, Owen wasn’t able to compete in this event because he has missed weight, which is one of the things that Middleton had mentioned he had learned from.

Talking about better communication a little further out from the fight might have put him in a better position to renegotiate the weight for the fight but it is all a valuable lesson learned and we adapt and grow from it. Middleton said that Trykowski just couldn’t have got any more weight off without a risk to his health and his opponent wanted him to get within a 0.5kg limit. Which meant that the fight was called off, in the interest of both fighters.

Pete Scott who was able to compete and claim himself a UKMF Scottish title at the weekend will be celebrating by flying off to Thailand for a month. Middleton had said that Scott will definitely be one to watch out for in the future and congratulated him on his most recent accomplishment.

Now, not only does Keith Middleton promote Ballroom Blitz, he fights on it too! He fought this time around for a UKMF title and stopped his opponent in the first round. He said he was just getting started when the bell to signal the end of the first round rang. The crowd went quiet as they do whilst the cornermen worked their magic but then much to everyone’s surprise, the fight was called to an early demise.

His opponent Dawid Nowak of Glasgow Fitness suffered a broken arm and was unable to continue with the fight. Middleton spoke about how, after the fight, Nowak has sent him the picture of the x-ray and his arm was literally snapped. Ouch. Both Fight Record and Middleton wish Nowak a speedy recovery and there have already been talks of a rematch which should make for an interesting bout.

All in all, a fantastic event. Middleton was very happy with the way that the show ran and wanted to thank everyone involved who helped him along the way. Ballroom Blitz will return next year to the same high standard!