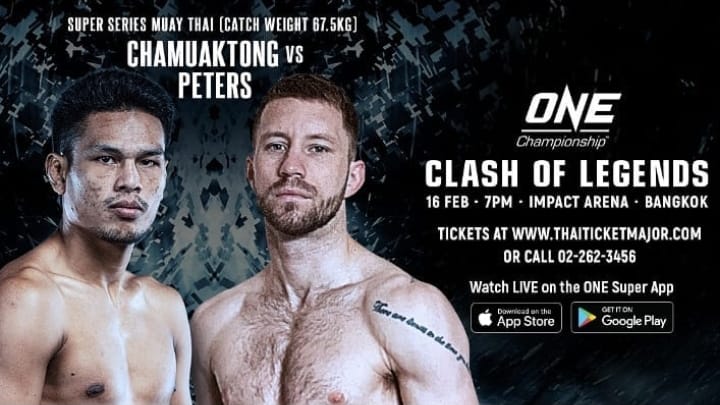 Originally scheduled to make his ONE debut against multiple-time Lumpini Stadium champion, Petchmorrakot Petchyindee, back in December, Peters was forced to withdraw from the bout due to a back injury.

In that match, Peters was replaced by arch rival and former UK #1, Liam Harrison, who subsequently went on to lose via 2nd round TKO against the Thai stadium champion.

Now recovered from the injury, Peters makes his rescheduled debut at the Clash of Legends fight card in Bangkok this Saturday against multiple-stadium champion Chamuaktong.

Chamuaktong has won stadium titles at the two most prestious Muay Thai arenas, Lumpini and Rajadamnern as well as a WMC World title.

He has fought some of the top names in the sport in his 170-fight career, including Petchboonchu and Nong-O Gaiyanghadao, who headlines the ONE Championship card which features four Super Series Muay Thai bouts.

Check out Chamuaktong Fightermuaythai showcasing his stellar striking skills in his ONE Super Series debut at ONE: REIGN OF KINGS back in July last year.

Can Peters take the win in his ONE debut against the experienced Lumpini and Rajadamnern stadium champion at the 11,000-seater IMPACT Arena in Bangkok on Saturday?

Watch the full Clash of Legends fight card LIVE and FREE on the ONE Championship app from 12pm GMT.