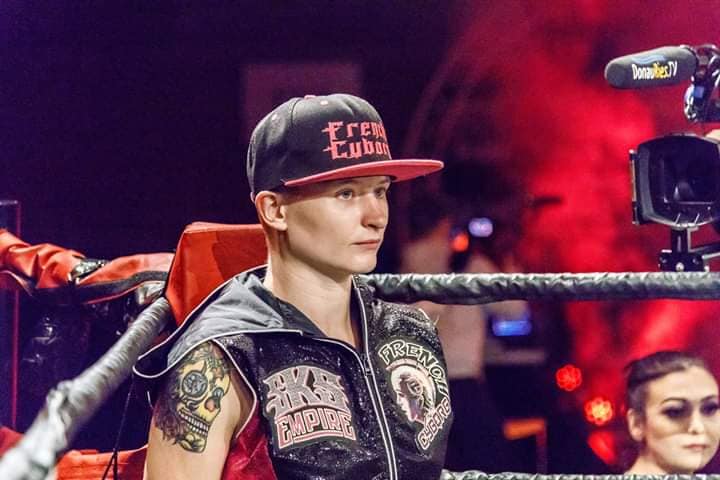 French fighter Cindy Silvestre is one of the most active female fighters in Europe at the moment, and she will step back through the ropes again this weekend just three weeks after facing top UK fighter Grace Spicer last month.

We spoke to the ‘French Cyborg’ to get her thoughts on her last fight, and looking ahead to this weekend and what’s next.

Can you tell us about the fight with Grace Spicer last month?

Cindy: “The fight against Grace Spicer was the first fight I had with my new team. I respected the game plan, I used a lot of blocking, low kicks and my elbows.

“The fight was close, but I feel like I won this fight, even if two judges decide otherwise. We recounted the points on the video replay and I won this fight. But it does not matter, I knew that I was abroad and that I had to make the difference even more.

“Her coach refused a second fight against me in December in England. I will find a promoter in France to make the revenge, I hope this time her coach will accept.”

Do you know anything about your opponent this weekend on Enfusion?

Cindy: “I know that my opponent, Hara Dimitrula, trains often in MMA, but otherwise I do not know anything else about her.

“My coach watched his fights for our game plan, and I am training hard for this fight.”

What does it mean to you to be fighting on Enfusion again after winning last time?

Cindy: “I am proud to return to Enfusion because it is a big circuit. I would like to climb the rankings and get a fight for the title at 52kg or 54kg.”

Anything specific you have been working on for this fight?

Cindy: “I changed team two-months ago and we made a lot of changes in my style. We have worked hard for this weekend, but I can not reveal my game plan.”

Do you have any more bouts confirmed that you can tell us about?

Cindy: “I have a fight against one of the English numbers on 12th October, the information for this fight will be released soon. On 9th November, I am on a tournament at 4 Lion Belt in France. This is a very important tournament for me.

“On 23rd November I am back at the Fighting Edition in France, the opponent is still to be defined.”

Looking ahead to next year, do you have any plans or goals you would like to achieve?

Cindy: “I still hope to have a big season this year. I competed 28 times last year and I hope to do the same this season. I’m going to go to Thailand for a few months too. And my plans would be to win an Enfusion World title and fight at ONE Championship.