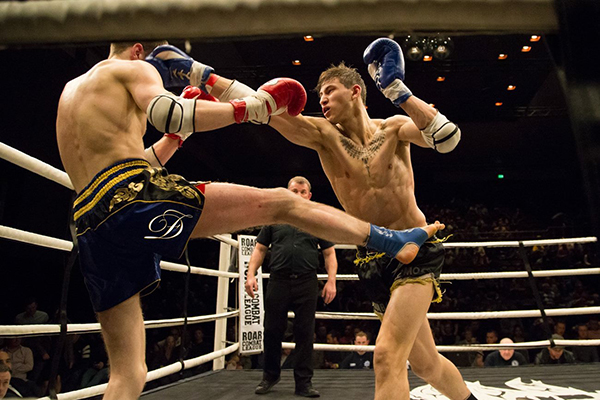 Corefit UK is bringing one of the most successful shows from down south, ROAR Combat League to the Midlands. Featuring three of the Fight Record fighters, Sam Omomogbe, Macauley Coyle and Rajan Swali. Steve Broome teamed with Henry Cleminson and ROAR to bring a new level of production to the Midlands. “Henry and I have been successfully promoting under the Corefit UK presents Fight Night banner for several years. Between us, we have had fighters compete on all of the “big” shows, YOKKAO, Main Event ect.

However, the experience of competing in ROAR Combat League stood out. Christian is one of the most highly regarded, genuine figures in the sport. Although we had several promotions to choose from, there was never any doubt that ROAR was the one for us.”

With a huge amount of talent on offer. There will be plenty Muay Thai entertainment for fight fans to take heed of. If you’re in the Birmingham area and fancy an evening of Muay Thai fun, then don’t mess. Get down to Edgbaston Cricket ground and get yourselves a ticket to Corefit UK presents ROAR Combat League. “To bring ROAR combat league to Birmingham is huge, this isn’t a scaled down “road to” event, we are bringing the same production, the same excitement the fans expect from the Watford Colosseum shows to the Midlands.”

Weigh-ins are currently happening (2 pm, 30th March) and the event is set to kick off on 31st March at 2 pm. There will be so much talent there it will be sure to deliver to the crowd that comes. ROAR was conceived by Christian Knowles of the Knowlesy academy.

The Muay Thai/K1 franchise has gone from strength to strength over the past couple of years. It will continue to grow and provide a stage for the UK’s best up and coming fighters. “You can see from the card we are raising the bar in the Midlands. We have eight bouts featuring elbows with three B class on the main card featuring some of the UK’s best and most recognisable fighters, we have a premier league K1 bout between Nathan Epps, who recently returned from regularly competing in China and Sam Omogobe, Road to Glory runner up!”

You can still get your tickets on the door at the cricket stadium tomorrow. Some of the top talent in the UK will be joining Steve Broome and Henry Cleminson. To put on a fantastic display of Muay Thai for the crowds. ROAR have seen stars like, Jonathan Haggerty, Christi Brereton, Panicos Yusuf and Alex Bublea on the stage, this time around will be no different.“Jompop Kiatphontip is bringing his latest addition, the former two time southern Thailand Champion Meca Kiatphontip who takes on the devastating UK#1 Macauley Coyle.”

“Dani Fall takes the next step in her pursuit of Amy Pirnie. Giving away 60 fights experience to fight the French standout Yolande Alonso. Don’t even get me started on the undercard! Josh Breslin, Jack Grant, George Griffiths, Louis Gumery…. The talent on show is immense!”

With other fights like Simon Forest vs Jono Chipchase and Jack Maguire vs Liam McGrandles, the green-eyed monster is definitely coming out to play. Attendance at this event is a must!