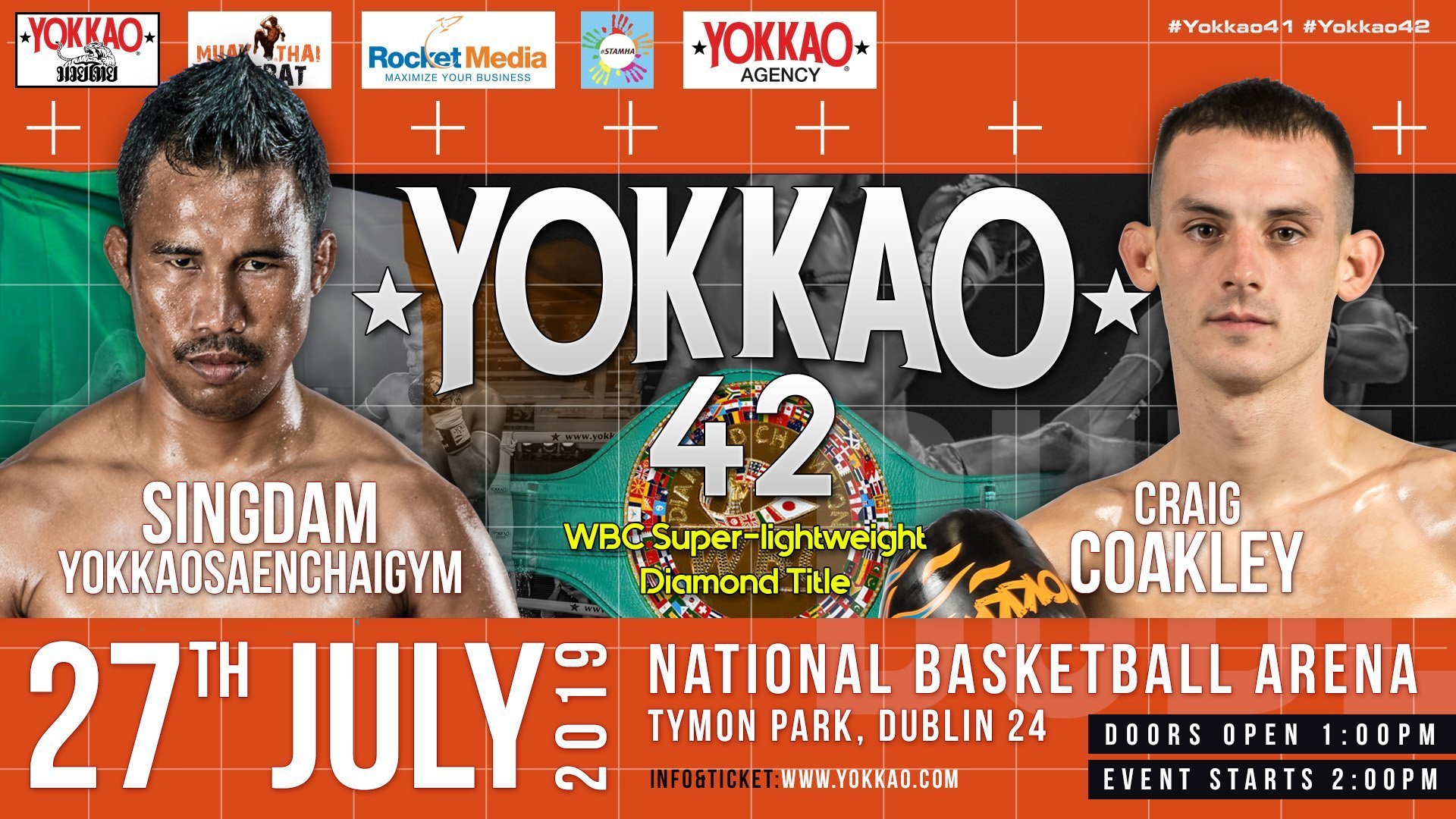 Craig Coakley will be headlining Yokkao 42 this weekend against Singdam for the WBC super-lightweight Diamond title. Fighting out of the Dublin Combat Academy, Coakley has been on a streak of victories on the Yokkao promotion minus a wild knockout loss the Mo Abdurahman. Currently ranked #16 in the world at lightweight, he will want to make a statement at the division above on Saturday night. Singdam has been a staple for Yokkao since his first bout against Saenchai back in 2013. The Thai has since gone onto beat some top UK opposition such as Liam Harrison and Jack Kennedy.

Singdam starts his bouts in a very similar way, often trying to slow down the pace of the fight for the first couple of rounds before gradually building the pace in the higher scoring later rounds. Typically he begins the bout by teeping the thigh of his opponent, the short movement required to achieve this makes it an extremely quick method to jam an opponent as they begin to throw a kick or punch. If Singdam detects that they are resisting the teep, he’ll deliver a swift low kick forcing the opponent to either check or take the leg kick. Thereafter, the opponent keeps less weight on the lead leg to make it easier to check but consequently makes it easy for Singdam to teep the lead leg away and so the cycle continues.

If Singdam feels as though he has lulled his opponent into a false sense of secuirty, he will occasionally go fishing with a high kick. Even if the kick does not land cleanly, it certainly puts the opposition on edge.

Singdam is also one of those few fighters who is both happy to work with their back against the ropes and is also extremely good at avoiding damage whilst doing so. Most of the early rounds are spent with his back pinned against the ropes yet most opponent struggle to score.

Singdam has an extremely effective and powerful weapon in his right kick. When against the ropes he will lean back against them when he turns for his kick, pulling his head far outside the reach of his opponent. Many fighter will get overly aggressive if they see there opponent backed up against an obstacle like the ropes, committing themselves too deeply into the range of Singdam’s kicks.

Coakley’s record currently stands at 21-3 with 17 wins via knockout which already give you an indication of why he is one of the most exciting Thai boxers at the moment. He has managed to win all three of his Yokkao victories inside the distance, stopping fighters such as Jack Kennedy, Myk Estlick and Chris Whittle.

One of Coakley’s is his high output from the outset and throughout the bout, especially with his boxing. The Irishman does not throw the kitchen sink at his opponent with each strike, but relies more on his volume. The focus on volume rather than power means he can sustain the long barrages and high work rate throughout a bout. Think about how much harder it is to throw power shots continually rather than focusing on the quantity of blows.

That being said, Coakley’s boxing still has a signficant amount of stinging power behind it. Against Myk Estlick, Coakley wore him down with continuous pressure and bodywork. Often chaining a 1-2 combination with a kick, knee or uppercut on the end of the combination. Coakley’s right knees were lethal and eventually wore down Estlick with blows to the body, finishing him in the third round.

Against Jack Kennedy, the Irishman was able to bypass Kennedy’s staple stiff arm guard with his boxing by looping the left hook around the guard. Coakley also switched between an orthodox and southpaw stance. He had great success landing jab cross hook combinations and delivering the left cross down the centre of Kennedy’s guard. The nail in Kennedy’s coffin came when Coakley broke the extended arm of Kennedy at the elbow hinge and came over the top with a cutting elbow which caused the fight to be waved off.

A good matchup for Coakley?

Coakley’s last appearance on Yokkao resulting in him being knocked out by Mo Abdurahman in what can only be described as a technical brawl. It was the first time that we saw Coakley on the back foot against an ultra aggressive opponent. Coakley showed excellent timing with his right knee, winding Abdurahman. Indeed he actually caused Abdurahman to take an count before the sequence of fight ending spinning elbows. As Coakley went to spin for the elbow, Abdurahman did the same a split second later. Coakley spun into the incoming elbow of Abdurahman ending the fight in a way which could not have been predicted.

It’s seems unlikely that Singdam will be the ultra aggressive fighter Abdurahman was. Indeed his willingness to sit on the ropes might aid Coakley who has proven his skills at working in volume striking against the body and head. He won’t be looking for a single shot to finish the fight so Singdam will have his work cut out if he is to keep the Irishman off him simply by teeping the leg. Coakley might simply walk through this and be willing to take a few low kicks in order to work the body of Singdam.

Singdam has also been rocked a number of times whilst fighting (including a devastating knockout loss to Kazbek Kabulov on Yokkao 25). More recently, Singdam was rocked early in the first against Mathias Jonsson via a jumping knee and was dropped by a right hand from Jeremy Payet on Yokkao 35. This can only embolden Coakley into thinking a finish is a very real possibility.

The Thai will need to slow Coakley down to avoid the Irishman getting a running start. As mentioned before Singdam’s right kick and knee are extremely effective at nullifying his opponents. The question remains whether the Thai can utilise these skills to slow Coakley or the only way to slow Coakley is to meet aggression with aggression.