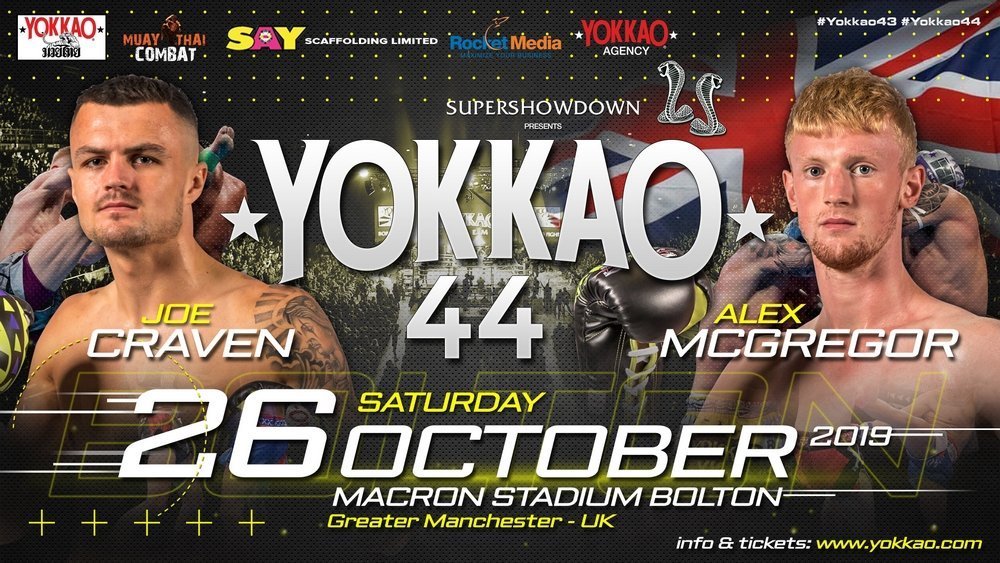 Headlining Yokkao 44, Joe Craven will be looking to defend his unbeaten record fighting for the promotion against the tough Scot, Alex MacGregor. Whilst Craven is a well established name in both the 72kg division and the Yokkao show, MacGregor is still somewhat of an unknown quantity. Making his Yokkao debut against the home favourite Niall Brown on Yokkao 37, MacGregor shocked many in his defeat of the much touted prospect. A victory over Joe Craven would surely set MacGregor as belonging at the top of the 72Kg division.

When to stand and when to back off

Craven is currently coming off a loss against Youssef Boughanem for the WBC Muay Thai World Championship. Despite this being the biggest stage Craven has yet occupied, he certainly did not look awed by the challenge. Immediately responding to Boughanem’s jab by slipping his head to the outside line of the strike whilst simultaneously throwing his own jab. This simple counter to the jab is an effective deterrent in preventing fighter’s who rely heavily on the jab, either to set up longer combinations or keep their opponent on the back foot. This strategy of jabbing with the jabber helped to establish Craven in the fight in the opening minutes.

The bout also showed some Bad Company gym staples, such as the doubling up on low kicks. A technique whereby the opponent may check the first but rarely expects the second to so rapidly follow. Low kick specialist Liam Harrison frequently utilises this once his opponents become more intent on checking his favourite weapon.

Possible Craven’s strongest recent performance was his most recent bout for Yokkao where he defended his number one sport against the veteran Chris Shaw. During this bout, Craven showed a subtly yet effective blend of pressuring and baiting. Either feinting Shaw onto the ropes before then delivering strong boxing combinations which worked both his opponent’s head and body, further reducing Shaw’s output.

Alternatively, Craven baited, backing step by step away from the ropes as Shaw tried to fight his way off them. Once Shaw got settled in his role of aggressor, Craven would suddenly stop backing up, hold his ground and throw a straight hand or left hook. Shaw walked into a number of these, multiplying the force with which they landed. Often this would cause Shaw to back up again, allowing Craven to pressure, allowing the cycle to continue.

Craven is still relatively early on in his career and has a wealth of time for further improvement. However, despite the news that he is to face young prospect George Jarvis in November, he would be foolish to look beyond his bout with MacGregor.

MacGregor made his presence known to the vast majority of UK Muay Thai fans on his last performance on Yokkao 37 where he defeated home favourite Niall Brown. MacGregor’s build instantly became apparent, his reach and height being significantly longer than that of his opponent, despite Brown being a fairly lean build for the weight class.

Using this reach advantage, MacGregor immediately began to try and post his lead hand on the face of Brown. Ideally this would obscure the opponents vision and allow MacGregor to set up his strikes with a reduced risk of Brown countering or intercepting them. Brown reacted to this with the right overhand, looping it over the shoulder or the left hook to the body. The outstretched hand prevented MacGregor from tucking in his elbow to his body to block the blow.

Indeed, for the majority of the opening tow rounds it looked as though Brown was having his way with MacGregor. Picking at him with low kicks and bursting into his boxing combinations. It wasn’t until midway through the third round that it seemed that MacGregor found his pace. Becoming the aggressor advancing with switch kicks.

At this point Brown began to try and utilise the stiff arm on his advancing opponent. Whilst Brown had counted this using hooks to the exposed body and overhands, MacGregor preferred to counter using his elbows. Each time he felt the glove of Brown reach for his head he folded his right elbow over the top of the extended arm. The length of his arms made this and effect counter which worked numerous time during the bout.

In addition, as Brown began to tire, MacGregor began to further sap his energy reserves in a grinding clinch battle. His extra height allowed him to lean on Brown, forcing him to carry his weight in the clinch. The output of Brown waned as a result, reducing dramatically from the first and second to the final two rounds.

MacGregor went onto win the bout via a majority decision, somewhat of a shock for some fans attending the Yokkao show who had Brown tipped for a shot at the UK number one spot.

The main point of interest in this bout is how each fighter excels in a different remits. MacGregor tends to prefer single or double shots, picking away at his opponent gradually. Craven on the other hand appears to enjoy using his combinations to a greater extent, boxing into his kicks and knees.

MacGregor is also a lot keener on the clinch using his height to lean on his opponent to exhaust them. Indeed, MacGregor has not lost since December 2017 where he took on Reece McAllister. On that occasion MacGregor was able to keep McAllister at bay for much of the three rounds in a clinch heavy battle. However, McAllister’s body shot paid dividends and was able to stop MacGregor in the third. McAllister does have excellent body work and had finished the likes of Josh Turbill with them.

The question remains whether Craven can either replicate this or find enough space to avoid his combinations being squashed by the clinch pressure of MacGregor? Likewise, will MacGregor be able to pick away at Craven or will he by forced on the back foot by Craven’s ring craft?