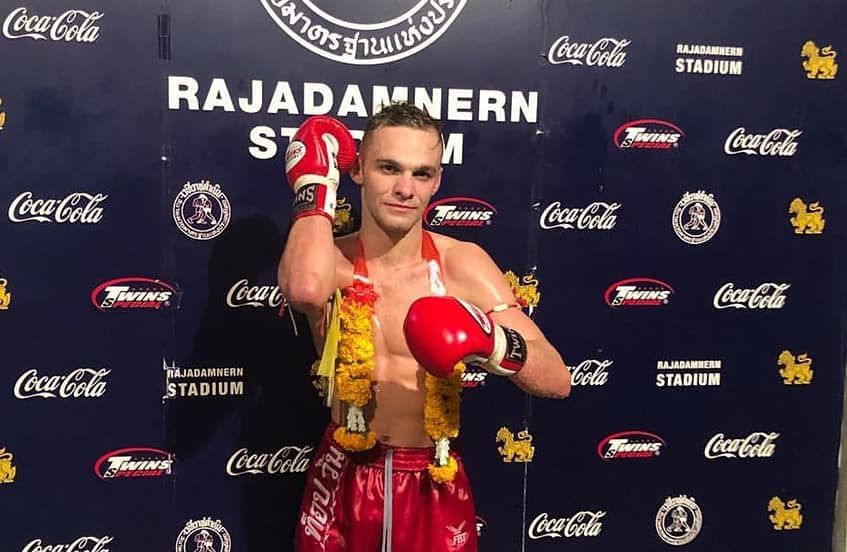 For those of you that know of Dan McGowan, you will know that he hasn’t been consistently active these last three years due to an ongoing hand injury.

You will also know that even though he’s had these issues, he’s had some incredible wins against Thailand’s best, including Rajadamnern champ Rungarai Kiatmoo9 at YOKKAO 28 in 2017.

What you may not know is the fights Dan wants going into a Covid and injury free 2021.

“I want the f***ing top c**ts at the weight, I’m coming for them all. I could list all the Thai’s I want to fight but there’s so many”

Daren Rolland is a 21 year old fighter from Paris, France.  He is WBC World Champion at 57kg and WBC International Champion at 55kg.

“He is WBC World Champion at featherweight and being a Tim, why wouldn’t I want that green strap? He is also now signed with ONE Championship and ranked number 3 in the Strawweight division.”

29 year old Arthur Meyer is another French fighter, he is currently fighting out of Singpatong in Thailand.

“Arthur is probably not as well known in the UK/Europe because he has been fighting the stadium circuit in Thailand for a long time. I love his style and think his and mine would make an amazing match. I genuinely think Arthur is one of the best 57kg fighters in the world.”

Josh Tonna hails from Canberra, Australia and is currently signed to ONE Championship. His most recent ONE victory is against England’s own Andy Howson.

“Josh is the #1 strawweight on ONE Championship, fighting him would mean a chance to fight for one of the most prestigious belts in Muay Thai. Saying all of this is all well and good but I need to get signed to ONE (Championship) first.”

Rocky trains under world famous John Wayne Parr at Boonchu Gym and is also signed to ONE Championship, he is ranked #2 in the ONE strawweight division.

“Rocky and I have had similar paths in Muay Thai, we have both went to Thailand and tried taking on Thais in the Motherland. He always brings 120% and loves a good war, so do I! We’re both young and hungry to be the best so I know it would be an amazing fight. He is also signed to One Championship so again, fighting him would push me to where I want to be in the sport.”

Shirou is a 27yo Japanese fighter who fights between the Thai Stadiums and the RISE World Series promotion in Japan. He has notable wins against Thailands top fighters, including Rungkit Wor.Sanprapai.

“Shirou and I fought for the ISKA Super Bantamweight World Title in Tokyo in 2016. I replaced Dean James on just under two weeks notice over the Christmas period. We went 5 rounds and nearly the whole arena thought I had won the fight although it was close. It’s a loss on my record I would love to avenge. Shirou has went on to beat Channel 7 champions and even beat Rungkit in Japan.”

McGowan‘s last fight was on the True4U Promotion at Rangsit stadium (Thailand) in November 2018, since then he has returned home and has underwent three surgeries on his hand to get it back where it needs to be in order to compete. His most recent surgery being in June 2020 which (fingers crossed) looks to be his last.

We asked him his feelings on returning to the ring in the near future:

“I’m just so buzzing to f***ing fight again. It’s been a long time. I can f***ing make a fist for the first time in a year and a half. I’m happy, I’m feeling good and I’m not a fat out of shape c**t. Everything is just goooooood.”

It’s clear to see that Dan is excited to get back into the ring and we at Fight Record are definitely excited to see him back in action again. Let us know in the comments who you would like to see him face in the near future.