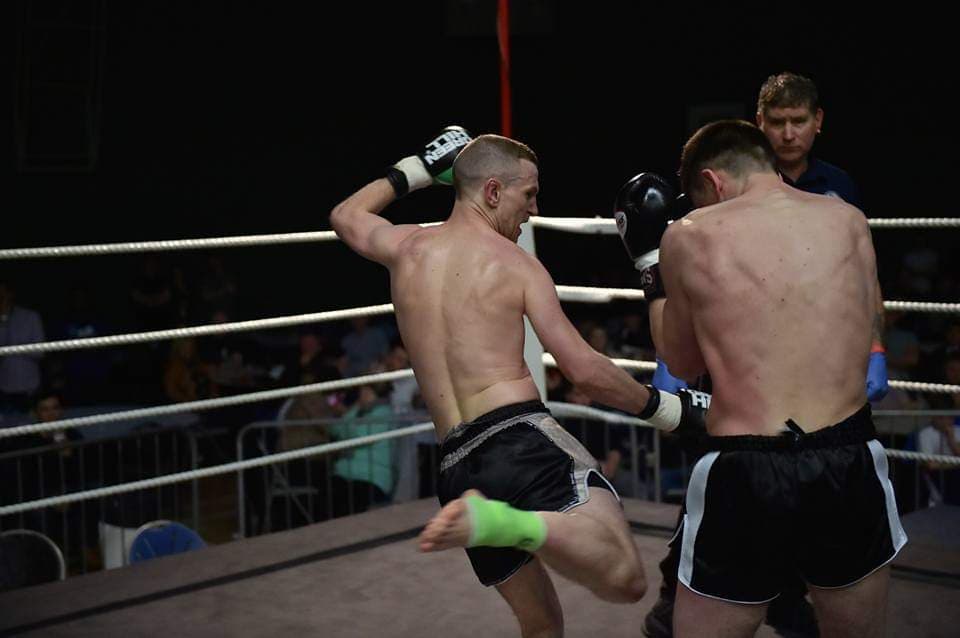 A few years ago, Danny Gillespie, who trains at D-Unit gym in his hometown of Dumbarton in South-West Scotland, was never a fit person. He’d spend weekends drinking and partying for days on end and was in a really bad shape which he didn’t care about.

Early into his relationship, his girlfriend fell pregnant and Danny decided it was time to sort his life out. This is his story on how combat sports changed his life.

“Everyone watching me and being in the spotlight was like my worst nightmare, but I went for it because I like to do things that make me uncomfortable.”

“My girlfriend is a champion Semi-Contact kickboxer and runs her own club. I had always been interested in a contact sports or be in the army or something that would test my physical ability, but I suffered badly with anxiety and it held me back with everything.

“I have never spoke about it to anyone, I just dealt with my own demon’s myself. It wasn’t until about a year ago that my family found out, only because I slipped into depression and couldn’t hide it as well as I normally could. Anyway that’s a whole new story!

“So my girlfriend encouraged me to get into something and get fit. I tried her class but I didn’t like the head gear and pads etc. So I found an MMA gym close to where I live and went there. Once I started, I was hooked in it all!

“I quit smoking, I got fit and stronger. I loved the aspect of fighting and competition, but found it hard in my mind to deal with. Everyone watching me and being in the spotlight was like my worst nightmare, but I went for it because I like to do things that make me uncomfortable.

“Lost my first fight MMA in about 57-seconds with a triangle choke. I went for a second fight and lost on points over three-rounds. I feel like I went in with the wrong outlook and attitude to these fights.

“I left that gym and joined the team at D-Unit. I was so nervous, but the first night I went in and did what I do, I ended up getting put in with the pros for their sparring rounds! I was like yeah I’ll do it, I’m not going to say no! I just told myself I had to prove myself and I think I done well.

“That night after training, I got a message off my coach JC saying I did amazing and he thinks I was going to be a big part of the fight team. I was instantly proud and buzzing.

“So I stuck at MMA for a while, getting my blue-belt and making my game stronger. I had another MMA fight under the D-Unit gym. I couldn’t have prepared any more for the fight, but I got caught with an armbar in second round against a strong opponent.

“After that I just tried to get stronger as a fighter. After a year I focused on my stand-up game, I prefer standing trading shots I just felt more comfortable there.

“So my coach JC and Mark were taking the Muay Thai team and they were making more of a name for themselves. I took a Thai fight on four-weeks notice, I had around 16kg to cut and it was a same-day weigh in!

“I was knackered before the fight but I went in anyway; I dropped my opponent in the second-round and went on to fight another strong three-rounds and took the win by decision.

“Once I had that win, I was so happy in myself! There is no greater feeling than getting that hand raised at the end of all that hard work, and that was it – from thereon I was a Muay Thai fighter and absolutely love it!

“I’ve fought four-more times since then, only taking one loss. I’ve had a bit of time off due to not getting matched and injuries. but hopefully this year is a very active year for me.

“I just want to fight tough opponents and have a war. I’m the weirdo that doesn’t mind getting hit – I love a scrap! My whole ambition in this sport is to get the reputation as a tough motherf****r just like the reputation my coach JC had.

“I want people to be nervous of taking a fight with me, knowing it’s not going to be easy.”

“If belts come into it, I would love that also but I just want fights. I’m aiming to move to A-Class and fight the top fighters in the game and can’t wait till that day comes. I don’t care about the money, I just want to fight!

To keep up-to-date with all of Sofia’s latest fight news you can follow @dannygillespie50 and @fight_record. View Danny’s full fighter profile here. If you want to get your fighter profile on our website and get featured, submit your information via this form