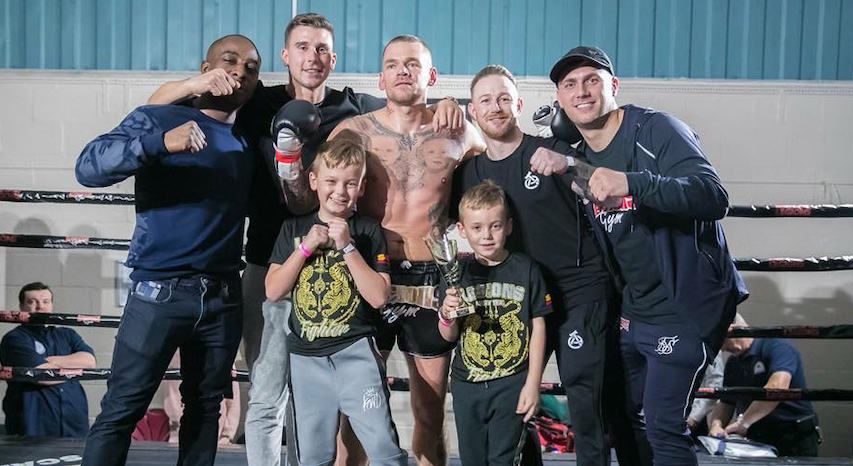 Last night saw Dave Phillips and team Legions put on a show for fight fans in Poppleton, York. As mentioned on the Night of the Legions 7 event page, Dave had, what he thought was going to be, his retirement fight on his last show, but due to unforeseen circumstances, his opponent pulled out and he had to compete against a late replacement. This time round, his opponent was there on the night and Dave stopped him with impressive skill and power.

Dave dropped his opponent, Jack Nelmes early in the first round with a nasty body shot and knee. He smelled blood and went in for the kill. Stopping Nelmes later in the first round with a lovely body, right hand, left knee combination. The crowd went wild celebrating with the 38 year old head coach. He shared on social media, “Well that was the last fight I will ever do. I’m 38 now and leading up to this fight, I realised my body can’t take training properly for a fight. Those that were with me every day know how much I moan about my feeble hips n back”

Having a solid team behind you helps to build confidence and ability and Legions are in no shortage of a supportive community. Dave also shared, ” (There are a) couple of thanks I need do make, Andy Howson taking 3 weeks off work to come over and train me each day we worked in the body shot a lot and it paid off, James France been with us since day 1 of legions and Steven Coupland, Zac Evans for the mad sparring sessions. And not to forget my main man Phil Wetten who’s always 100% behind me in everything I do! That’s me done and dusted thank you to everyone that’s ever bought a ticket to come watch me and supported Legions. Now, I’m off to Thailand with the gang.”

Now that his retirement is here, he can concentrate all of his efforts on building the Legions team into a bunch of bloody hungry fighters. He has showed the younger generation of the gym that it’s not the man in the fight but the fight in the man. Now that he can relax and not be in fight camp, what a better way to celebrate than to be shipping of the Thailand?