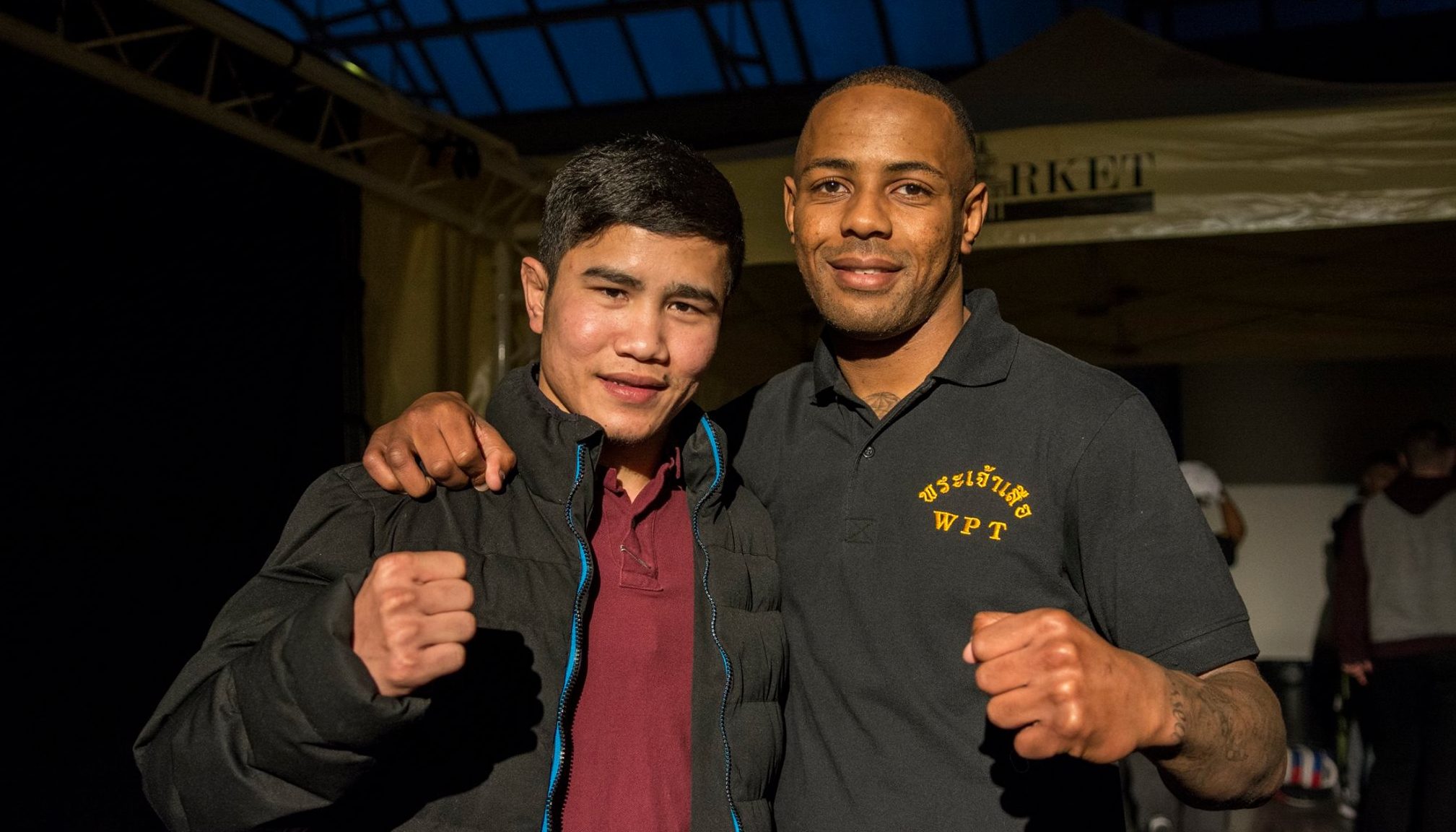 After several rumours about retirement, last week Pra Chao Suua coach and fighter Dean James took to social media to announce he is not retired and will be back in the ring very soon.

“I will be fighting soon, just awaiting confirmation. I have two children, a job and train and coach at the gym. This means it’s impossible for me to fight every other month. I take the hardest fights offered and have done throughout my career.”

After the announcement, we spoke to the current Thai Fighter UK 58.9kg #3 to get to know more about his day-to-day life and his plans for his fighting career.

Can you explain what day-to-day life is like for you, family/work/gym, training and teaching etc.?

“My life from day-to-day differs but remains hectic! But I wouldn’t have it any other way. I have always juggled my career with my hobby; which is obviously Muay Thai! It helps to have such amazing support network that help out when things get crazy busy.

“My children have now began to show an interest in the sport and train with the junior classes from time-to-time. I’m unsure how I would feel about my children fighting, but as long as they can protect themselves I’m happy.

“In regards to training, Tony [Myers] ensures that I get the right amount of work in when I have fights coming up. Sometimes we train at crazy times, for example in the past we have trained 5am or even near midnight to make sure I’m getting the rounds on the pads.

“Some of these sessions we may not even train. Instead, we will watch footage of fighters that have particular skills that I may need for the fight. We also watch my upcoming opponents to identify their strengths and weaknesses.

“I really can’t thank this man enough for all his time and hard work.”

Can you reflect on the fight with Sittichai last year and how things have been since?

“I really enjoyed that fight! Sittichai was happy to move back and fight very defensively.

“He is more of a kicker so I decided I wanted to show that I could match that, so we worked a lot on being responsive and timing sharp kicks to ensure he couldn’t sway back from them or block them like we seen in his previous fights.

“I got cut pretty badly in the third round, so I was trying to avoid the clinch, which is one of my strongest points when I fight.

“Every time we got into the clinch he would rub the cut with his glove to try and open it up more. It’s the first time anyone has cut me, I thought I cut him as we’re exchanging elbows, then I looked down and seen the blood was on my chest and shorts!

“He took some solid shots and continued to smile, typical Thai I guess! Looking back on it, I would have changed a few things but I think that’s normal when you watch your own fights back.

“I lost my friend due to a motorbike accident the morning before the fight, so I really didn’t know how I would perform and but really wanted make him proud.”

As a fighter, no different to the previous years, I want to fight the best. Obviously now moving up to 59kg it opens a door to a few more fights for me and potential catch weight fights, which is something I’m looking forward to as it’s a new challenge.

“I have been contacted by a few promoters for potential fights, so it’s a positive start but nothing yet matched so I’m just waiting on the call really.

Plans as a coach is to create a good standard of fighters and pass-on the knowledge I’ve learnt on to them. Assisting them through their fight careers. It takes a team to build a fighter, so I couldn’t do this alone.

“We have some good fighters coming through and I’m blessed to have such a good bunch of people around me.

“I’m a part of a solid coaching team at Pra Chao Suua; Tony Myers, Garby Nawaz and Gurtake Swali. We all work side-by-side to ensure we’re giving the best standard of coaching we can. Our juniors are improving quickly and having a lot of success on the junior scene, which is great to see.”

How many fighters are you aiming for this year and who would you want to fight next?

I have no set number as such, I just want to be in good fights. I know there are some really good fights out there for me so when they are offered I’ll be in!

“I would love to fight Superlek; that’s someone I’ve watched for years now so it would be amazing to share the ring with him. His fight with Chris Shaw was crazy and each time he comes out of Thailand he fights differently, so it would be a huge challenge but one I’d happily welcome.

“Obviously I’d jump at the opportunity to fight Ja Kiatphontip! I believed I beat him last time we fought, as did many others that attended the fight. It was frustrating not to get my arm raised. We have asked for the rematch several times but can’t get the fight as of yet.

“It would be nice to get the opportunity to fight on ONE Championship as that guarantees solid fights and a great stage to perform on.”

What would you like to achieve before you retire?

“This is a question I’ve always asked myself since my first fight and still don’t know now. I just want to continue fighting at a high level really and continue to develop.

“It would be great to be recognised as one of the best from our gym, as the guys that represented the gym before me did an amazing job for a number of different reasons. Fighters such as Will Hastings, Yuki Fung, Karla Hood, Damien Hood, Dave Lloyd, Liam Robinson and so many more to mention, but all represented the Pro Chao Suua well.

“I tried to take as many things from all of their styles from videos Tony used to show me, to create my own style. So to finish my career and be in the same bracket as these guys would be something I’d love.”

“Thanks to all the guys at Fight Record for their continued support – doing an amazing job!”

You can see Dean’s full fighter profile here and follow him on Instagram @deejay_5985 to see up-to-date with his latest fight news. You can also find Dean’s fighter profile along with 11 of his team-mates on the Pra Chao Suua gym page here.