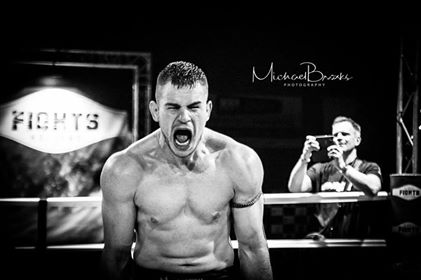 This weekend saw two of the Bad Company fighters fly out to the motherland of Kickboxing to compete for a chance to win a world title each. Both Mateusz Duczmal and Tamara Fallon fought on Global Fights event in the Netherlands, Bad Company fighters are never in an easy fight, with the backing from the full team and head coach Richard Smith, they are renowned for their successes.

It was a 50/50 split for the two this time around. With Mateusz securing himself a world title and Tamara getting stopped in the first round. Mateusz is one of the big lads and fought five, very hard rounds to secure himself the Global Fights world title that he set out to ascertain. Fighting against Raymond Bonte, a very experienced Dutch Kickboxer, it is a big win for the Polish man who now resides in the West Yorkshire city of Leeds.

Unfortunately, there are good times in the ring as we can see and there are times which are not to good and enjoyable. Tamara Fallon fought another Dutch kickboxer who, on the night was the better in the ring. Falling victim to a flurry of body shots, Fallon took an 8 count early on and her opponent smelled blood and went in for the kill. Landing some good shots of her own, the Bad Co. signature, leg kick and some good knees, Fallon just couldn’t keep up with the body shots coming in and the ref deemed her unfit to continue.

It is never easy conceding a loss on any stage but to be away from home and on a big stage, we are sure that Tamara will bounce back from this, learn and grow as a fighter. Their records have been updated on the Fight Record database. If you would like to take advantage of the Pre-launch deal that is on offer now then get in touch via our social media channels.

Fight record would like to congratulate Mateusz on his win and wish Tamara all the best after this weekend’s bouts.