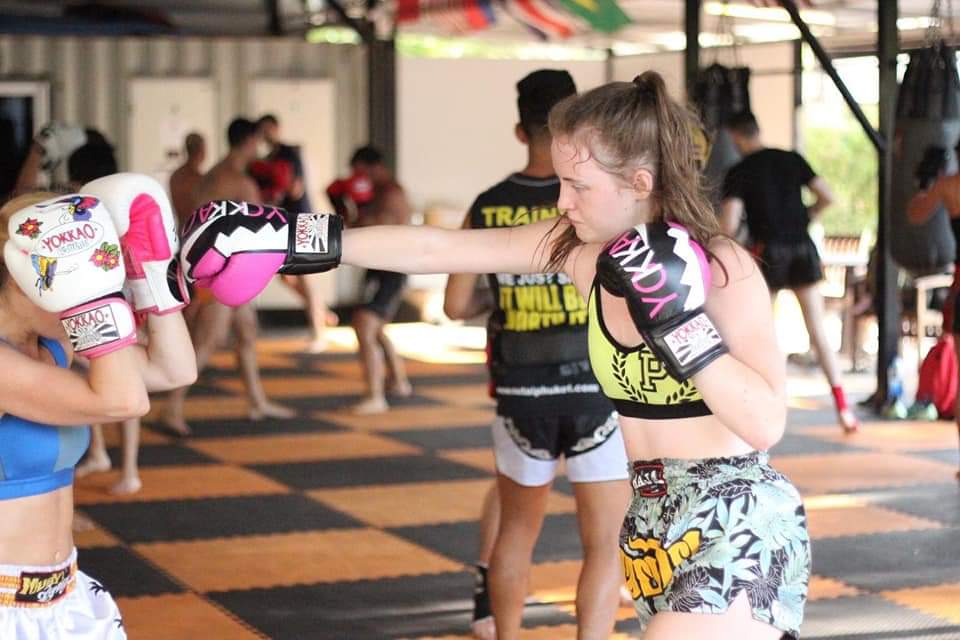 Earlier this year, 17-years-old Scottish Muay Thai fighter, Erin Kowal, packed her bags and travelled to Thailand to pursue her dream of living and fighting in the Motherland of the sport.

Just three-fights into her professional career at Sutai Muay Thai in Phuket, Erin has already had her fair share of ups and downs that come with life as a fighter in Thailand.

This is her story about her experiences so far.

“I’m not going to lie, the journey to Thailand has been difficult”, Erin told us. “I had an image in my head before coming here that it would be all sun, sand and smiles. It’s anything but.”

She continued, “It took me a bit of time to settle and to be honest I still think about home pretty much every day. It’s a huge step to take. The lifestyle is completely different, the culture too. It really is a hard job.”

Erin continued to tell us that people see pictures of her days off and think life there is a breeze, but it is far from it. “My bedroom is basic, we share facilities such as bathrooms, kitchen and showers. You fend for yourself”, she added.

“Granted, I get free training at the gym and my accomodation also, but people forget about the basics; my food, clothes, phone bills and anything else that pops up need to be covered by myself. Baring in mind you’re only getting paid £100/£175 per fight, if you’re not active regularly it can be hard going.”

When asked about what training is like at Sutai Muay Thai, Erin responded, “Training is hard but good. I thought I was fit before coming over here but you’re not long in seeing the difference over here.”

“In the UK it was a hobby I was fortunate to be good at. Over here it’s a job, a way of life, it’s intense.”

She continued, “Don’t get me wrong, it’s hard, but it’s fair. The gym want to see you improve and achieve the best you can and the training is set up to do so. It definitely pushes you to the limits!

“Not much changes whether you’re fighting or not. Training basically remains the same. Like I said, it’s treated as a job over here so you’re in the gym every day.

“Obviously if there is a fight confirmed there’s more fine tuning in the training but no huge difference. It’s hard and just gets a wee bit harder.”

Despite going through a rough time due to fight cancellations, Erin is adjusting to the lifestyle in Thailand, and has began to settle down and enjoy life at Sutai Muay Thai.

“The gym is like one big family. I love the way everyone gets on inside and outside of training. It’s definitely made the step to Thailand a lot easier”, she told us.

“There’s people here who have been and going through the same situation as myself. It’s always good getting advice from them. Everyone has their good days and bad, so it helps someone having your back. Yeah, you miss home, family, friends, Cheese & Onion Pringles (haha!), but I’m enjoying the experience and the people.”

When asked about how she is feeling after the fight with Myriame, Erin said, “Not sure how to feel. Part of me feels disappointed, I think I could have won it if I had pushed a bit earlier, maybe let her reputation get to me a bit, I’m not sure.”

She continued, “On the other side, I feel proud that I gave as good as I got against a World champion who has fought and went the distance with the likes of Amy Pirnie and Dakota Ditcheva.

“I’ve got a few things to work on, but I’m learning every day. I’ve only been at Sutai Muay Thai since the end of January and still gaining experience.

“That was only my third professional fight so all things considered, I think I performed well. Just disappointed, as after watching it back, it was there for the taking. Anyway, onwards and upwards.”