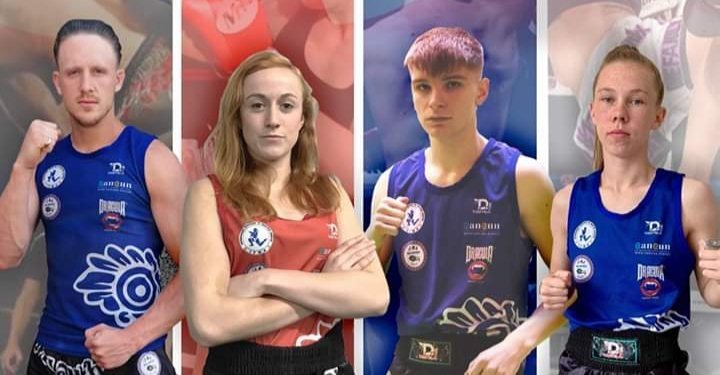 We are less than two-weeks away from the departure of the seniors selected to represent Team GB at this years IFMA World Championships in Bangkok, scheduled to take place from 19th to 30th July.

Earlier this year, Dani Fall, Michael Bradbury, Leigh Newton and David Sinclair were selected as the four seniors to take part in this years championships after winning their categories in the UKMF Trials in March.

Here’s everything you need to know about the four seniors making their way to Bangkok in the coming weeks.

Telford-based Flyweight fighter, Dani Fall, earned her spot in the team after beating the favourite Rhona Walker in the final of the trials held at Corefit UK in Birmingham.

Since then, the Reaper Gym star has gone on to win the WBC European title after beating Switzerland’s Aline Seiberth at Roar Combat League 13 in April.

Having beaten Walker under IFMA rules in the trials, a rematch has been scheduled for after the World Championships under A-Class rules at Roar Combat League 16 to determine the UK #1 at 52.5kg.

Michael Bradbury is one of two in this years senior team who also represented Team GB at last years World Championships in Cancun. The UK #5 Light-Heavyweight earned a bronze medal in Mexico last year, and was re-selected to represent the team once again in Bangkok this year.

The Hybrid Combat Gym fighter from Plymouth is coming off a split decision win over former-ranked Charlie O’Neill at Roar Combat League 13 in April, and will be looking to continue the momentum on the World stage at the championships in Thailand at the end of this month.

Representing Team GB for the second year in a row, Leigh Newton will be hoping to build on her bronze medal from Cancun last year. After an impressive performance in a stacked division, the Phoenix Thai Boxing fighter won her first two bouts and lost a narrow decision to Vera Buga in the semi-final.

Never shy from a tough contest, Leigh has faced some of Europe’s elite in her career, including Paloma Arranz, Camilla Danielsson, Fanny Ramos and Becky Caslin to name a few, and is determined to prove herself as one of the World’s elite.

The youngest of the four, David Sinclair of Griphouse gym in Glasgow, joins the team for his first Senior championships.

The young Scotsman has already been in action seven times in 2019. Having won gold at the Baltic Open after two wins in Lithuania, Sinclair then claimed his spot in the national team after three wins in the trials.

After the trials, Sinclair then went on to beat another talented prospect in Paul Murphy at Evo Thai Boxing in March and most recently registered a draw against Logan Ditondo at Blackpool Rebellion in June.