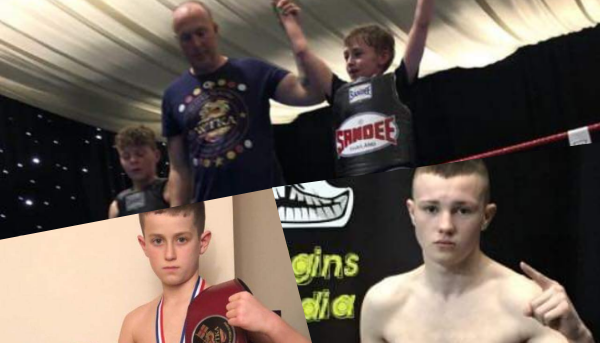 A funding campaign has been set up to help raise funds to cover the cost of getting three of Unit 5 Muay Thai’s junior fighters to the Unified World Championships in Italy in October.

When asked about the fighters who are hoping to represent the UK at the championships in Italy, Mark said, “Charlie Johnson won the UKMF open in Glasgow a few weeks back, taking the gold medal against the more experienced Luke Turner from Lumpini Crawley.

“He’s a pleasure to coach, never misses a session and always gives 100%. He had a busy year last year taking some good wins and is definitely one to watch out for in the future.

“The we have Jack McAdam. Again, he never misses a session and loves the sport. He’s a quiet lad who gets nervous in the run up to fights, but once he’s in the ring he loves it.

“He had a good win in the semi-final of the WTKA open a couple of weeks ago, beating young Finn from Lumpini Crawley, but faced the very tough Team GB representative Louis Fairhurst in the final which I ended up throwing in the towel after he took damage to the leg.

“Then there’s Hayden. He also had a good year last year, putting in some solid performances and has already started this year with a strong win over the 2018 YOKKAO Open champion and this year’s WKTA Open champion, Reiss Holden Payton.

“Hayden has had a few weeks off due to illness, but he’s back in the gym now firing on all cylinders getting ready for another busy year.

“This opportunity to fight over in Italy is something he’ll be giving 100% towards.”

Mark and his team are looking to raise £3000 towards to cost of getting the team over to Italy to take part in the competition. If you would like to contribute, not matter how small, you can donate via the JustGiving page here.