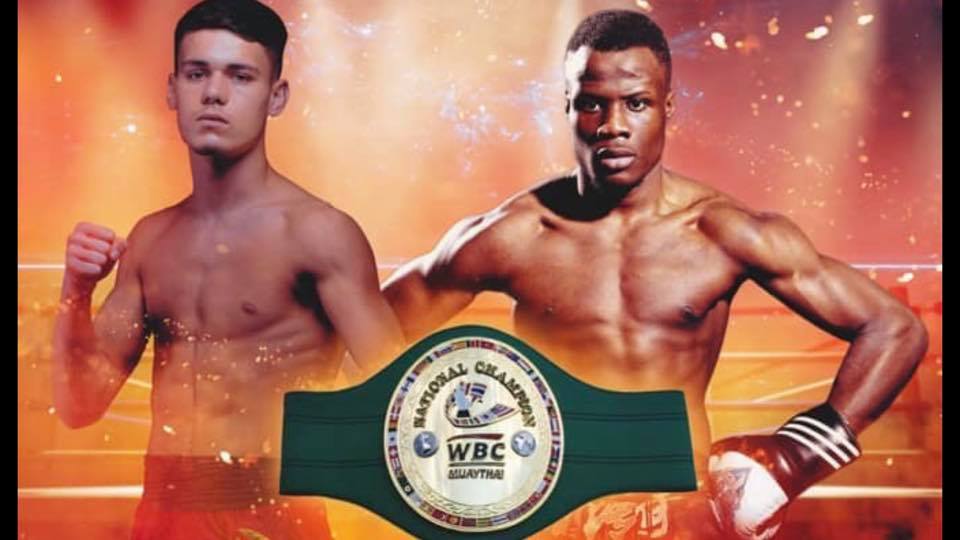 The upcoming weekend is set to be a busy one for the Muay Thai calender with events taking place up and down the country. One the line will be UK number one spots and in this case, titles. This of course is the English WBC super-lightweight title fight being contested between George Jarvis and Marcel Adeyemi.

For Jarvis it is the next step in his young career which has already caught the attention of the Muay Thai community and has him ranked at number seven at 72.5kg. Facing him is the young but experienced Marcel Adeyemi who is currently ranked at number five at 70kg. Both fighters have international fight experience already with Jarvis fighting in Spain and Adeyemi fighting as far afield as China.

Jarvis made his mark on the national scene with his dominant performance over Lubaisha Gael at Muay Thai Grand Prix back in April 2018. At only 17 years old and underweight by 3kg against a much more experienced opponent (Jarvis being 4-0 with his opponent being 14-3) it looked like an uphill battle.

Jarvis however dominated the fight, remaining in a southpaw stance for much of the fight, battering in left kicks to the open side of Gael. Although he took a few inside low kicks early on in the flight, Jarvis switched onto this offence and began retracting his leg and utilising his distance control to minimise the opportunity for the strike to land.

Jarvis also showed some little subtle techniques which showed maturity beyond his professional experience (most likely coming from his amateur pedigree). After throwing the left rear kick, Jarvis would bounce the same leg read to check the return kick of Gael to block any attempt at leveling the score.

During the first round, Jarvis fought mainly on the back foot whilst throwing the left kick. Whilst a few missed, by the second round Jarvis had become the pressuring fighter. Herding Gael toward the ropes, allowing his left kick to land more consistently From this position of control, Jarvis was able to start utilising his feints, drawing a premature check and keeping Gael guessing on what strike would land next.

During this fight, Jarvis proved he can work well off the back foot scoring with his kicks. He also proved capable of controlling the fight as the offender, working his feints and trips into his attacks.

Adeyemi began his fight against Dale Hughes in a similar fashion to Jarvis, coming out in a southpaw stance and throwing the left kick into the open side. However, Adeyemi instantly began to adopt the role of aggressor from the opening bell rather than waiting for the second round.

Adeyemi stance switching opened up a number of avenues for his strikes. For example, in southpaw he would use the double attack of the left straight and the left kick, traditionally the most effective southpaw weapons. In orthodox he preferred the lead left hook to the body and a low kick to the lead leg of Hughes.

During the third round Hughes began to show signs of slowing, the digging low kicks into his lead leg were taking their toll. After giving Hughes an 8 count, Adeyemi was instantly on the wilting fighter, delivering more low kicks to the outside of Hughs leg. Having Hughes so worried for his leg, Adeyemi switched his offence to Hughes head with a kick and kneed combination, finishing his opponent.

Adeyemi is a dangerous fighter, with an ability to mix up his offence to avoid becoming predictable and able to pile on the pressure when he senses an opportunity to drag his opponent in deep water.

One of the deciding factors for this bout will be which fighter acts the role of the pressure fighter. The offensive fighter is generally and easier position to play in terms of scoring and dictating ring control. Acting as a defensive countering fighter constantly means being on a hair trigger alert, ready to react to any incoming strikes. Attempting to perform this flawlessly for any period of time is a lot more exhausting than being the fighter who feints and dictates when exchanges take place. It is easy to imagine that Adeyemi will take this role with his fast starting style.

Jarvis has proven himself capable of fighting whilst moving backward, however his first professional loss was to Jake Purdy who was able to wear the more inexperienced fighter down in a clinch battle. That being said, Jarvis remained a threat, dropping Purdy with a well timed head kick as he stormed forward. Adeyemi will be looking to minimise Jarvis’s offensive options, keeping him back pedaling and delivering his strong low kicks.

Both fighters capability to switch stance and fight effectively from them could also prove an interesting dynamic. This fight has the possibility to top the large number of top level fights scheduled this weekend.