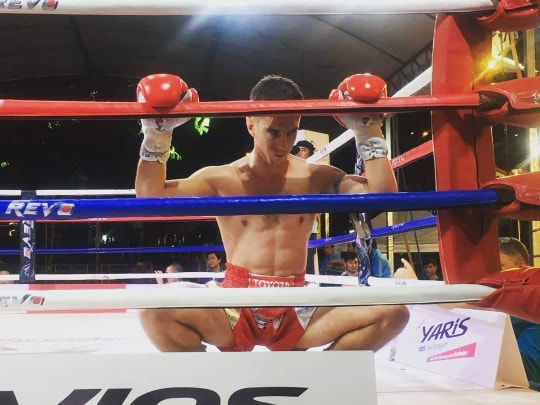 The young Spanish fighter, who has had almost 50 fights in his career, is also a keen writer and runs the Esquina Thai blog, which is a very popular and well known Muay Thai blog in Spain.

After competing under amateur rules for two-years, Gonzalo had his first professional fight in Thailand in 2014. Since then he has gone on to fight competitively both in Spain and Thailand, notching up an impressive record and many achievements.

Sign-up to access the Fight Record fighter database and see Gonzalo Tebar‘s full fighter profile plus all of his Muay Sapein team-mates.

Last year, Gonzalo spent another 6 months at Santai Muay Thai where he successfully defended his WPMF title before losing it in his next fight.

After beating the experienced Mondo, who is the current Thai Fighter UK 57.1kg #6, Gonzalo made a big statement and is looking to be more active in the UK in future.

To enquire about matching Gonzalo, you can contact the Fight Record matchmaking team via Facebook or email.