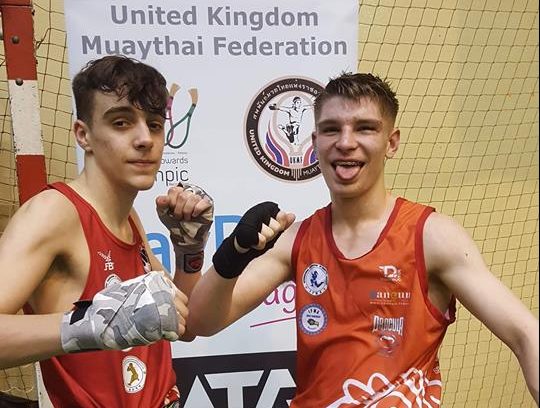 Corey McLachlan and David Sinclair, of the Griphouse gym in Glasgow, both took away the Gold medal in their categories on the final day of the Baltic Muaythai Open in Lithuania today.

Corey, who beat Belarus’ Pavel Sadouski in the semi-final on Friday, got the win in the final today via points (29-28) in a tough contest against another strong Belarusian, Timofej Sidorov, and took the Gold in the Junior -57kg category.

After beating another Belarusian, Daniil Dzemianchuk, in the semi-final on Friday, Sinclair dominated Lithuania’s Ernestas Malinovskis in the final to take the Gold medal at the annual Baltic Muaythai Open.

Watch the replay from the UKMF live Facebook feed below;

Team GB ended the annual Baltic Muaythai Open with 10 gold medals, 4 silver medals and 4 bronze medals with a win rate of 75%. Finishing second in the medal standings only behind Belarus who took a huge team of 100 athletes to the Championships this year.