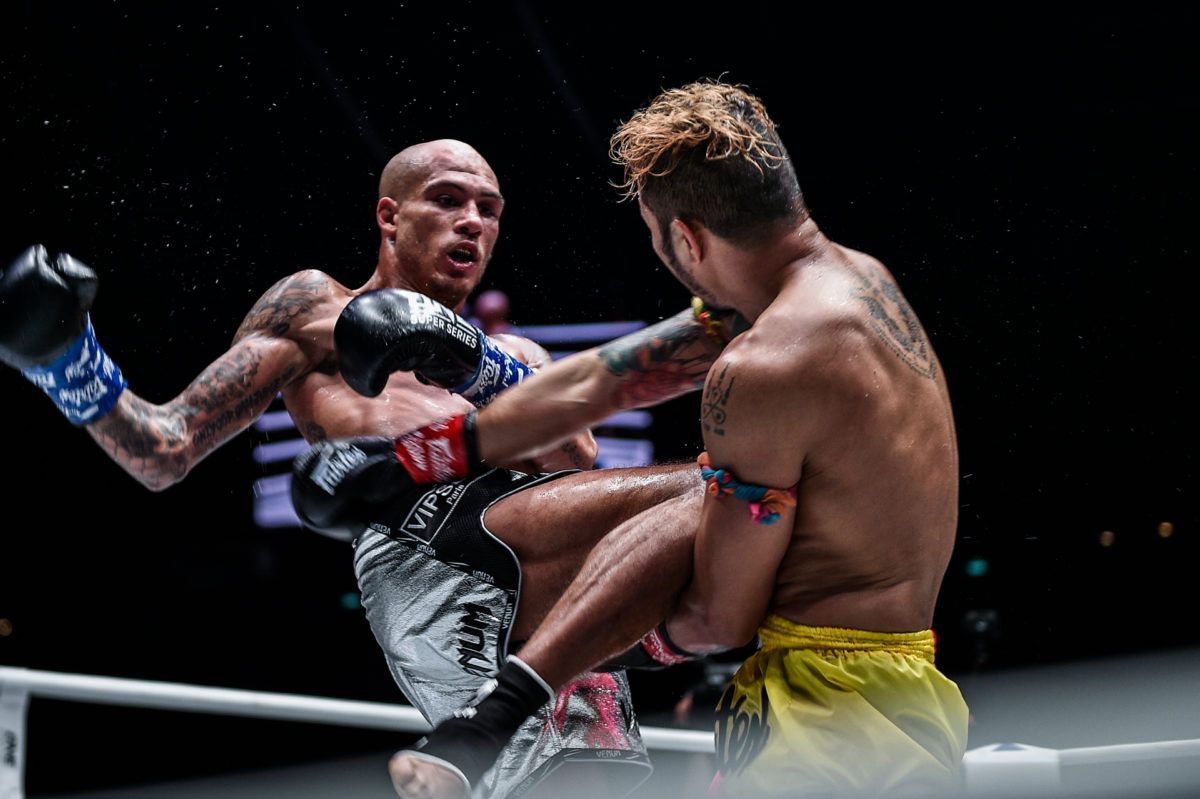 ONE Championships latest event: Enter the Dragon signaled the beginning of their featherweight Kickboxing Grand Prix. At stake is the featherweight championship belt and a huge one million dollar prize. Many were stunned as the tournament favorites touted to win were knocked out in the first round with Giorgio Petrosyan and Yodsanklai Fairtex losing in their respective bouts.

Both of these fighters have been active against the sports best competition yet have remained undefeated for years with Yodsanklai not losing since 2011. So how did Samy Sana break this impressive streak having already lost to the Thai in 2013?

From the beginning of the bout it became apparent that Sana held an insanely long reach and height advantage over the Thai. Typically, the taller fighter will seek to use this reach advantage by utilizing their longest weapons, namely their kicks and long straight punches. The start of the first round seemed to indicate this with Sana going kick for kick against Yodsanklai.

However, as Yodsanklai moved in Sana did not attempt to skip backwards or move around the ring to keep the distance between them. Instead he remained stubbornly in the Thai’s face keeping his hands high covering his head (sometimes called putting your ear muffs on) with his chin firmly tucked to his chest to minimize the risk of catching a clean blow. This stubbornness also meant that Sana refused to compromise his stance position and give Yodsanklai any further openings.

The close proximity to Yodsanklai and solid stance allowed Sana to counter the Thai’s boxing combinations immediately. Yodsanklai has a number of habits (perhaps born out of the past few fights in the smaller 4oz gloves), one of these is his lean back. This is a catch all attempt to avoid an opponents strikes be they with the fists or legs. However, Sana’s length meant he was able to overcome this lean back and catch Yodsanklai.

Towards the end of the first round Yodsanklai leant back in an attempt to avoid the right kick of Sana. The Algerian’s reach meant the foot connected with Yodsanklai’s chin. As Yodsanklai tried to counter with a left straight (being the southpaw) he dropped his right lead hand opening him up to a counter left hook by Sana. Dropping the Thai moments before the bell resulting in the 10-8 round for Sana.

Yodsanklai recovered quickly for the opening of the second round and came out launching strong boxing combinations against Sana. The Algerian stood strong, able to effectively counter the Thai by feeding an upper cut through the center of the guard. Whilst Yodsanklai tried to counter this new offensive he lowered his guard allowing Sana to catch him with left hooks and right crosses and force him against the ropes.

Whilst it did feature in the opening round, Sana’s use of knees increased dramatically in the second. Each time Yodsanklai attempted to open his boxing offence, Sana would deliver a knee. This would either deter the offensive or wind the Thai as he exposed his midriff and walked onto the spearing action of the knee.

Whilst the rest of the round turned into a war of attrition, Sana appeared to be scoring the cleaner shots by firing the right straight as Yodsanklai leaned back out of the way. As with the kick in the previous round, this caught the Thai on a couple of occasions.

In the opening of the final round, Sana clearly believed that his kneeing strategy was working landing four in quick succession as Yodsanklai attempted to advance. Whilst the Thai had put on a more competitive performance in the second round, it was apparent he would need a strong showing in the final to stand a chance of winning.

The round progressed much as the second had until Sana caught a low kick Yodsanklai threw and launched a counter right straight. This rocked Yodsanklai and allowed the Algerian to launch a barrage against his opponent against the ropes. After a brief break, Sana tried the counter again but Yodsanklai was able to avoid the lunging right.

Despite the best efforts of Yodsanklai, Sana saw out the round in a fairly dominant fashion, refusing to shy away from the Thai’s power.

Much of this bout revolved around Sana being able to deliver counter combinations and knees whilst staying in Yodsanklai’s face. The basic concept of keeping your hands up (especially in the larger glove size) and chin tucked can be seen from this bout. Whilst Yodsanklai certainly landed with power throughout the bout, almost all the punches were caught on the gloves or top of Sana’s head. Whilst not conducive for long term brain health, the likelihood of receiving blows to the top of the head being a knockout blow is a lot lower than taking a shot to the chin.

Indeed, fighters such as former Glory champion Joseph Valtellini, made a career out of putting the ear muffs on and countering with boxing and low kicks the moment their opponent committed. Valtellini is a cautionary tale however with his title reign ending after he captured the belt due to head trauma – most likely due to his style of fighting.

That being said, for the purposes of this bout, Sana performed exceedingly well. Refusing to be intimidated by the touted tournament favorite and utilizing his strong counters and knees. Sana also did well capitalising on Yodsanklai’s bad habits such as how he drops his hands (especially his lead right hand) when boxing. This allowed Sana to catch the Thai with several strong left hooks through the fight (a quick shot when their lead hands are so close).

With Yodsanklai and Petrosyan out of the picture, it is likely that Sana is the new tournament favorite but in such a setting another upset could easily occur.