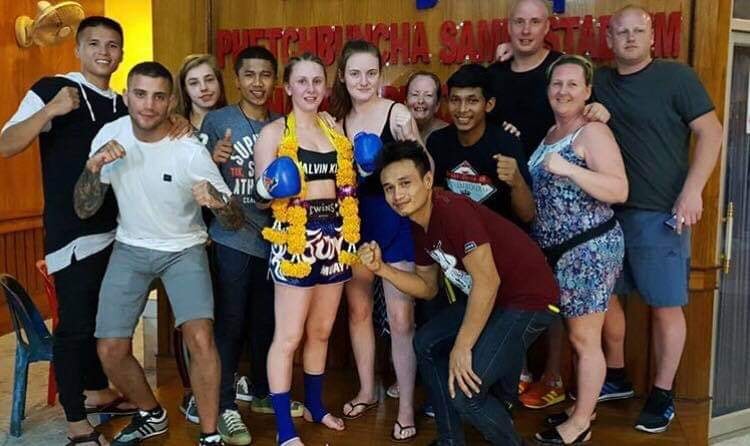 Two weeks ago, Ellie Barker of Hanuman Thai Boxing in Darlington, flew out to Thailand where she has been training at Jun Muay Thai in Koh Samui.

Last night, Ellie beat Sweden’s Latifah Soliman in her first full Thai rules bout at the Petchbuncha Stadium. Coming into the fight as the underdog, Ellie outworked her opponent showing more strength in the clinch and took the win on points.

We spoke with the Hanuman fighter, who now has 60 fights on her record, to get her thoughts on the victory.

How are you feeling after the win against Latifah?

“I’m really pleased I got the win. I’ve trained really hard over here after I had a little break for Christmas. My shins are a little bit sore but apart from that I’m good.”

How do you feel after having your first A-Class fight?

“I enjoyed the fight much more without the padding. The whole thing was a really good experience and I would definitely do it again.

“I didn’t feel tired at all in the fight. In A-Class the break between rounds is two minutes, but when I fight in England it’s only around 30 seconds, so I had a lot more time to get my breath back.”

You had a tough opponent who lives and trains in Thailand with more experience. How confident were you of getting the win?

“I never really worry about who I’m fighting. I just try and do what my corner team tell me to do and concentrate on that.

“It wasn’t as difficult as I expected it to be.”

What did you know about Latifah before the fight?

“I was originally supposed to fight a Thai, but she got injured and pulled out, then I got matched with Latifah.

“I didn’t know anything about her but my dad did a bit of research and found some information.

“She trains at our friend Rodrigo’s gym in Sweden, and when she is in Thailand she trains at Sitjipho in Hua Hin which is were my coach Craig Willis trains when he comes to Thailand so I knew she would be good.”

What have you got planned for the rest of your time in Thailand?

“I’m going to relax for a while as my shins are sore and I have a black eye.

“I will probably train a couple of times before we head back home on Wednesday next week. I’m also going to try and get a sun tan as I’ve had to keep out of the sun before my fight!”

Would you like to to live and train in Thailand?

“I always said I wouldn’t want to live in Thailand, but I’m not so sure now.

“I have my exams at school coming up so I probably won’t fight much around that time, but maybe in future I could come over here to live.”

Do you have any upcoming fights planned in the UK?

“I don’t have any fights planned in the UK this year yet. I can’t fight head-contact until I turn 16 in April, so I probably won’t fight again until then.

“The UKMF trials are coming up soon though so I might go to them but I’m not sure yet.”