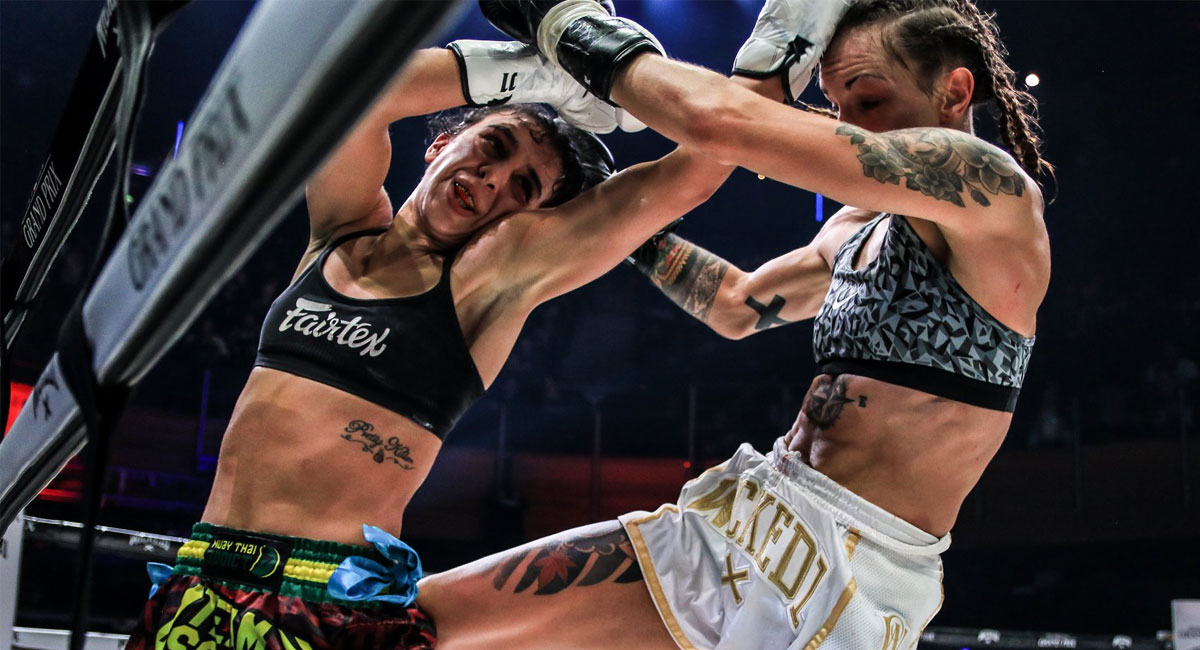 Led by head coach Jompop, Kiatphontip gym in Leeds is home to some of the top names in UK Muay Thai, including Brad Stanton, Shane Farquharson, Amy Ince and many more.

Having recently fought Iman Barlow in a close decision back at MTGP 21 in November, Hannah‘s next fight is against the current 57kg #2, Linzi Edwards, at Stand Up War 2 on 30th March.

We spoke with the Kiatphontip fighter ahead of the upcoming bout with Edwards to get to know more about how she got started training and what her future plans in the sport are.

How did you get started training in Muay Thai and what was it that got you into fighting?

Hannah: “Just over six-years ago I was regularly going out drinking, taking drugs and making lots of bad decisions.

“I told my friend at work that I wanted to get fit, so he suggested I tried Muay Thai rather than just going to the gym (which I already did).

“I enjoyed going to the classes, however it wasn’t long before I was going off traveling to Australia and SE Asia. Cut a long story short, I ended up at Kiatphontip Bangkok for most of my trip. Being around the fighters made me want dedicate myself and to have a fight.”

Can you tell us a bit about your most recent fight with Iman Barlow?

Hannah: “I really enjoyed the fight with Iman. I trained harder than I’ve ever trained, not just physically but mentally as well.

“I knew it would be a tough fight and that I’d have to push her back and try knock her out to get the win.”

Do you know much about your next opponent Linzi? How is training going for that?

Hannah: “Linzi and I have been scheduled to fight before, it’s been a long time coming. I think she is going to be K1 style and strong.

“Other than that, I don’t know too much about her. Training is going as well as usual.”

How is the rest of the year looking for you?

Hannah: “No fights confirmed after this but I will be staying fit all year and happy to pick anything up.”

What’s it like training with Jompop and the others at Kiatphontip?

Jompop is always keeping us on our toes. The training at Kiatphontip is great, all the girls are doing well (Sophie Hawkswell, Kavi Beh and Amy Ince) and we’re going to be having a great 2019, so watch out!”

And finally what’s your future goals and what do you want to achieve?

Hannah: “Goals for the near future would be to take that belt from Iman Barlow in a rematch, take the number one spot in the UK at 55kg and see where that all takes me.”