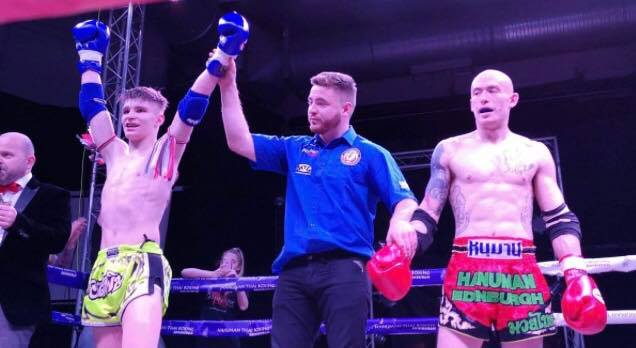 After winning the 2018 Open Championships, David Sinclair of Griphouse in Glasgow, was selected as part of the eighteen competitors to represent Team GB at the Baltic Muaythai Open 2019 in Vilnius, Lithunia this February.

“I set goals at the start of each year and this year I want start with getting a medal (hopefully Gold) in Lithuania.”

Now into it’s fifth consecutive year, this will be the biggest and without doubt the most talented team the UK have sent to the Baltic Open. We caught up with the Griphouse youngster to talk about training and goals with Team GB and his Muaythai career.

How has training been going recently?

“Great! I’ve been injury free so far and training has been stepped up a lot since Christmas ready for the trip to Lithuania. I’ve been upping my game a lot; getting sharper and improving my cardio for the fast 3×2 minute rounds.”

How do you juggle a busy training and fighting schedule around school?

“On school days I sometimes do a 6km run early in the morning before I leave home, or go on my elliptical bike. I leave school and head straight to training at the Griphouse (a 50-mile round trip) on the train into Glasgow.

“My school is great and they understand what I do with it being a sports comprehensive school; they acknowledge my achievements. I was awarded the ‘Kurrilla Cup’, a sporting excellence award last year after I won the UKMF Open Championships and was selected for Team GB.”

What does it mean to you to represent Team GB in Lithuania?

“It means so much to me knowing I’ve been picked to represent my Country and The Griphouse overseas. This is a great opportunity to show everyone what I’m good at and I can prove I can handle competing at an International level.”

How long have you been training and fighting?

“I’ve been training for three-years and fighting for two now. I played football before that and trained and played with a number of professional clubs as a Goalkeeper when I was younger. I started off at a local gym, then my dad took me to the Griphouse and I’ve been there ever since.”

How is life at the Griphouse?

“Great, I love the Griphouse, it’s like a second family. No matter what, everyone there supports and will have your back. Being a well-known mixed martial arts gym, you never stop learning.”

You’re matched on a big event in March on the same card as your coach, how do you feel?

“It’s always an amazing feeling being matched on the big shows as it means you’re doing something right. Paul Murphy is a great fighter and I am looking forward to sharing the ring with him. It’s also a great opportunity as it helps get your name about and hopefully I’ll get more fights down in England.”

“I love being on shows with teammates, so to be on a show with one of my coaches is even better. It also means both of us will be focused on the show and be able to train alongside each other in preparation for the show.”

What do you want to achieve in Muay Thai this year and in future?

“I set goals at the start of each year and this year I want start with getting a medal (hopefully Gold) in Lithuania. I also plan to trial for the Senior team as I will be 18 in February and hopefully I’ll get to represent Team GB over in Thailand at the World Championships in July.

“For the future I want to be the best that I can be and fight at the highest level all around the World.”