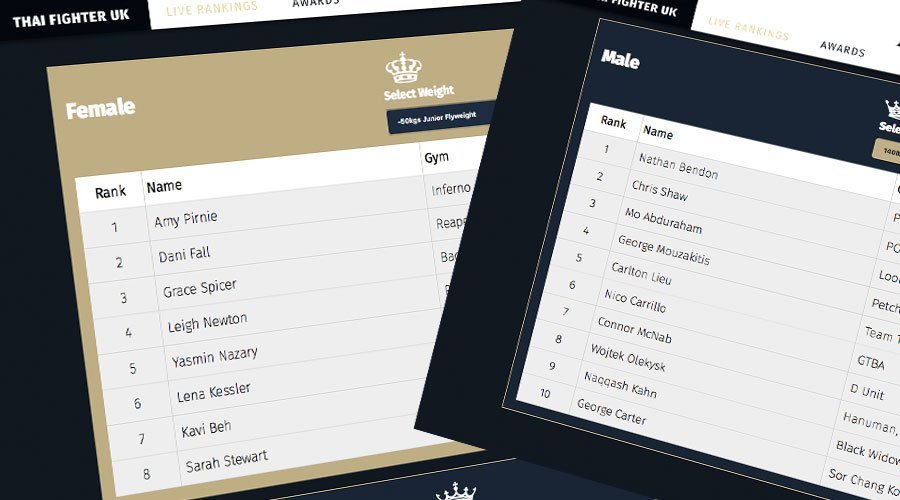 Recognised by the wider Muay Thai community, Thai Fighter UK is the source for the definitive UK rankings.

Founders Steve Broome, joined later by Dave Croft, took on the mammoth task of structuring the domestic fight scene. Through their work, it became apparent that to truly reflect and represent the UK scene, an independent site was the only way forward.

From humble beginnings in September 2012, Thai Fighter provides a clear, independent, and accurate picture of the best Thai Fighters in Britain.

Can you tell us where the idea of the Thai Fighter rankings came from and what made you want to do it?

Steve: “I suppose it all started many years ago when I was fortunate enough to spend time with Tony Myers. I remember talking to him about his reasons for getting involved with the officiating side of UK Thai.

“His selfless attitude I guess rubbed off and inspired me to look for a way I could myself give something back to the sport, and in Tony’s words, “it needed to be done”.

“Initially, I approached all the sanctioning bodies, websites etc., but none were interested. Eventually, after giving it to everyone else before me, the UKMF handed them over. I administered them for a while, but a few issues non-rankings related meant independent rankings were the way to go.”

Can you talk about the criteria and how you decide fighters are ranked?

Steve: “I look at every show I can find, if it’s Thai rules, it counts. There’s no politics, it doesn’t matter who sanctions the show, it’s all down to whether I can find the information!

“Over the years the criteria has evolved, but in a nut shell we only count fights on UK soil. One reason for that is it’s impossible to record results when they are abroad; it’s too easy to miss them.

“Secondly, people spoke up and said “if someone doesn’t fight here, they can’t be challenged/defend their spot”. The whole point of the rankings is to encourage competition in the UK; you can’t do that if someone lives or only fights abroad.

“The other main rule and maybe the most controversial is “currently competing”. Over the years we had so many coaches flat-out lie about their fighters weights, purely to enhance their spot. This lead me to only taking the actual advertised weight of a fight. Two consecutive fights at a weight is where fighters are deemed to be “currently competing”.

If a fighter moves up or down because they are “competing” in a different division, all they have to do is fight twice, consecutively, at their preferred weight and they go back… I don’t see why there’s drama!

“Maybe the other “controversial” rule is 12-months activity. After 12 months (and if no fight is scheduled within a reasonable time), fighters are removed. Again, this is to encourage competition and keep them up to date and accurate. Imagine being #2 and the top fighter hasn’t fought for 18 months… How can you improve your position?

“Lastly, I get asked if only A-Class fighters get ranked. It totally depends on the depth of the division; the male 82.5kg division for example, it goes, A-Class, Pro-Am, then B-Class. It just depends how competitive the division is.

“I administer the rankings following those guidelines, sometimes common sense needs to be applied. A fighter could be inactive for 12 months, but has a fight scheduled in a month… I’m not going to remove them for the sake of a month.

“People also have to remember we are going off facts, rarely opinion. Sometimes fighters are competing just over the limit, but that’s why we have weight classes!

“I would say the rankings are 90-95% accurate. You’re never going to please everyone and some fighters manipulate their spot; refusing fights to maintain their position. Some fighters have to move up a division due to lack of opportunities, but you can’t police that, just hope over the course it balances itself out.”

Did you ever think there would be so much prestige in a fighters spot in the rankings and how have you managed to achieve that?

Steve: “It’s fantastic how the fighters in the UK have embraced them. If they hadn’t I’m not sure they’d still be going.

“It’s very time consuming and I don’t profit in any way and do get some backlash. However, there’s lots of positives.

I’m happiest when so called “unfashionable” fighters get big opportunity’s down to their spot in the rankings. That was the whole point of doing them, in a time when everyone is a “Champion”, it’s great to hear people celebrating and chasing the UK#1 spot, more so the #10 spot!

“I personally have no vested interest in who’s #1… and ultimately everyone has the same opportunity to climb up the table.”

Over the years, which fighters would you say have been the most dominant domestically in their division, or which names stand out as some of the best to reach that #1 spot?

Steve: “Males… loads have dominated, but the one that stands out for me is Keith McLachlan. He beat the #1 to get the spot and has defended it several times to all comers… some of the others have not been so forth coming.

“I suppose the most “high profile” was Liam Harrison vs Charlie Peters. I believe without the #1 spot, that fight would not of happened.

“It’s also great to see the younger fighters coming through, now they have a clear path to the top. Promoters and coaches can test their fighters gradually.

“Liam Mcgrandles and Josh Hill, both seem to be benefiting, fight after fight improving, climbing up the divisions and I can see both topping their respective divisions in the future.

“As for female; Amy Pirnie. She again has defended her spot whenever asked, she’s fought up and down the weight divisions and I’d put her as pound-for-pound the UK’s best female. I’d also put Christi Brereton up there, she beat the #1 for her spot and has defended it, and is willing to defend against the #2.”

Could you talk the European/Global impact Thai Fighter is now achieving and maybe the next steps with Euro rankings?

“Thai Fighter is very unique. Outside of Thailand, you will not find domestic rankings as accurate anywhere else in the World!

“It’s no secret the WBC use Thai Fighter as their point of reference. If you climb the Thai Fighter rankings, you get a WBC World ranking!

“I’ve always said the fighters do the hard work, I just report it, however, it is very rewarding to see fighters getting recognition and big fights on the world stage based on their domestic ranking.

“Recently, the WBC also announced they will be doing European rankings. I was honoured to be asked to chair the rankings committee. It’s made up of several members from across Europe and will feature fighters outside the World Top 10.

“It’s great to give something back to the sport.”