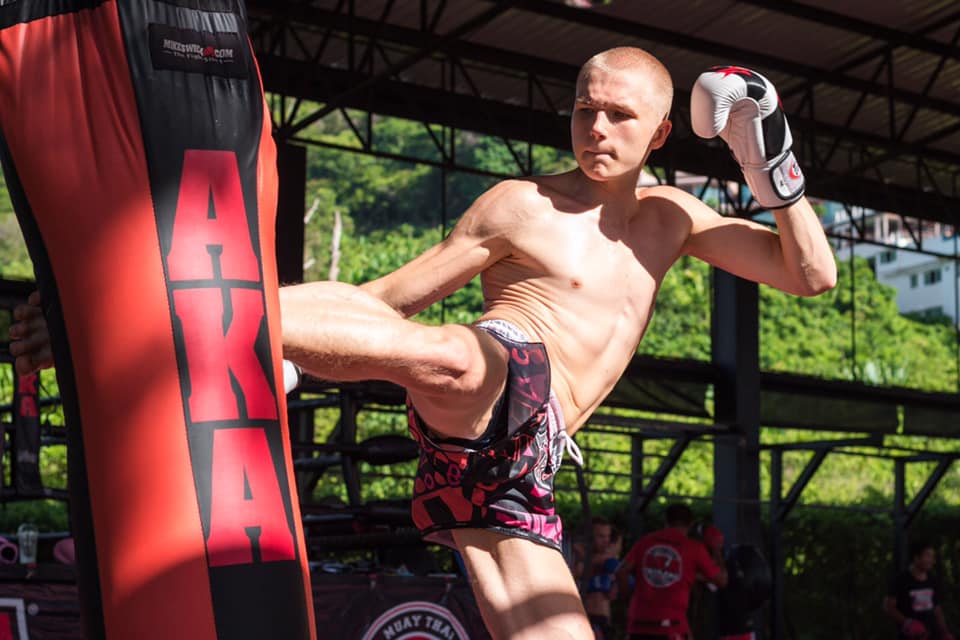 Seventeen-year-old Arvid Östlund, originally from Stockholm in Sweden, started training Muay Thai at the age of thirteen after getting bullied from being overweight.

Arvid began training at Slagskeppet Muay Thai in Stockholm and after a few month had lost a lot of weight and quickly became obsessed with the sport. Training six days a week, Arvid took his first fight in Finland at the age of fifteen.

Now at 17-years-old and not many active fighters in his weight category under the age of eighteen in Sweden, Arvid regularly visits Thailand for 4-6 months per year and trains with the team at AKA Thailand in Phuket.

This is his short story of how Muay Thai has changed his life.

“I had my first fight at the age of 15, since 15 is the age you can start competing in Sweden. Since then, I have been trying to get fights as often as possible, but since I can only can fight people under the age of 18 in Sweden, I have been having problems getting fights in my home country.

“I first came to Thailand when I was 15 and quickly fell in love with the culture and lifestyle. Ever since, I have spent spent 4-6 months a year in Thailand.

“In my last trip to Thailand I got injured. While being injured I noticed how good I felt and how happy I was in Thailand, so I then decided to drop everything in my life and move here permanently.

“Right now, I am currently back in Sweden, preparing to compete in the Swedish Junior Championship at the end of March and hopefully I can get one or two fights in before that as well.

“I go back to Thailand on 1st April and will then be looking to fight as often as I can and on the biggest stages.

“My dreams and goals are to become as good at the art of Muaythai and to fight at the biggest stages in Thailand and the rest of the World – and hope fully win a lot of titles on the way there.

“I have given my life to the sport and I will sacrifice anything for it. When I am done with my fighting career, my goal is also to build and own a gym, and coach the new generation.

“I’m currently training and fighting for AKA THAILAND in Phuket. I train every day, 2-3 times a day (except Sunday’s).

“My next scheduled fight is this weekend at Southside Battle 26 in Sweden and after that is the Swedish Junior Championship (30th March), but hopefully I can get another fight before that.

“I will for sure and hopefully be competing at the bigger shows in Asia in 2019 if everything goes well and I stay injury free.”

To keep up-to-date with all of Arvid’s latest fight news you can follow @arvid_muaythai and @fight_record. View Arvid’s full fighter profile here. If you want to get your fighter profile on our website and get featured, submit your information via this form.