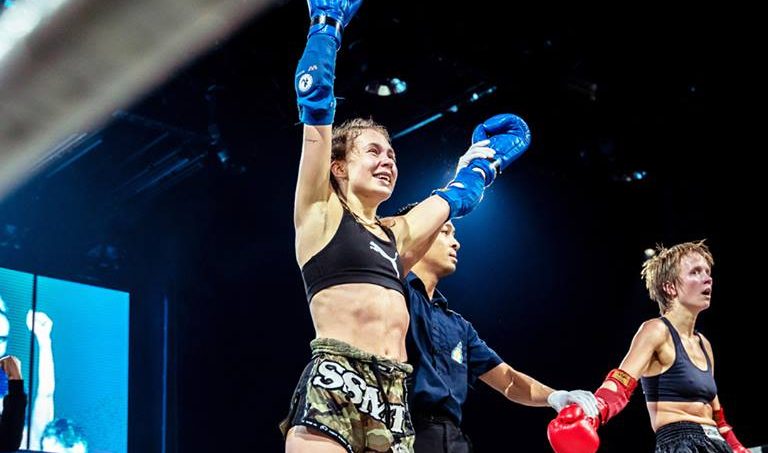 Uma Galli is a Swedish Muay Thai Champion, training out of Southside Muay Thai in Haninge, just outside of Stockholm in Sweden.

“I had developed a curiosity for the sport in 2016 when I trained at a gym in Stockholm which held Muay Thai classes”, Uma told us. “But it was mostly a strength and conditioning focused class with some pad-hitting.”

After these classes, Uma realised she really enjoyed hitting pads and decided to leave for Thailand to explore the sport properly. She found Sitjaopho Muay Thai in Hua Hin and would fall in love with Muay Thai.

In June 2017, at 22-years-old, Uma returned to Sweden and begin training at Southside Muay Thai in Stockholm.

“It’s like home to me”, Uma said. “We are one big family supporting each other through thick and thin. I am so grateful for all my trainers and friends at the gym who have helped me and believed in me all the way, I wouldn’t be anything without them. We do this together, always.”

In February last year, Uma had her first amateur fight. Just one year later, she had her 10th fight with a win in the Swedish National Championships final.

When asked about her fights so far, Uma replied; “I have won all my amateur fights which have been in Sweden and one at Roar Combat League in the UK.”

She added, “At the end of March this year, I flew to Las Vegas on short notice to fight my first Pro fight against Magalie Alvarez at Lion Fight Promotions due to a injury to her original opponent. I lost the fight on points, but learned a lot and really enjoyed finally fighting completely without any protection. I really realised this is what I want to do!”

During her short career, Uma has visited Sitjaopho in Thailand twice. Training with twins Phet-Tho and Petch-Eak Sitjaopho, Uma said she really has learned from the best and believes their style is the most beautiful Muay Thai.

“The trainers at Sitjaopho are all wonderful people, very kind, funny and dedicated, and the people I’ve met and trained with there are great”, Uma said.

Uma is planning on heading back to train in Thailand soon and said she wills always go to Sitjaopho.

When asked about her ultimate goal in the sport, Uma replied with an unusual but very interesting point;

“I just want to keep doing what I love and see where it takes me. I’ll take every opportunity to develop as a fighter. I don’t see any ultimate goal where I would be satisfied and feel “done”. The sky’s the limit, right?”

In just over a year of actively competing, Uma has racked up 11-fights, she has become Swedish national champion, traveled to the USA to compete and has found a second home at Sitjaopho in Hua Hin, Thailand.

For anyone that is thinking of taking a similar path but is struggling to take that first step out of the comfort zone, Uma has a message for you.

“I know the feeling! I’ve been there too. I was nervous before every class when I was new at the gym. I was at the back of the room and wanted to disappear when it was time for shadow boxing!

“I was always afraid no one wanted to pair up with me, but everyone was very friendly and welcoming and I realized my worries were completely unnecessary.

“Of course everything feels very strange and uncomfortable at the beginning, but just keep on practicing and training and you’ll feel better and more comfortable every day.

“The most important thing, which I still need to remind myself of sometimes, is that I do this because it’s so much fun!”

You can view Uma Galli’s full fighter record and profile here. If you would like to get your fighter profile and get featured on our website and social media channels, you can submit your fighter information on this form.