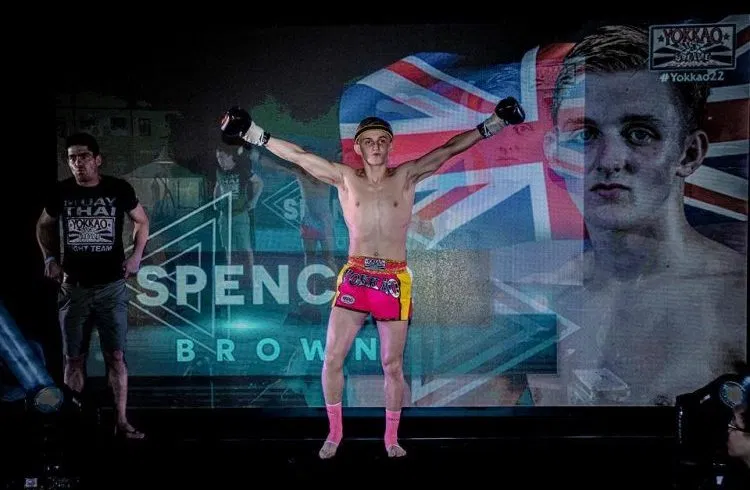 At the Yokkao training centre in Bangkok, this generation’s Muay Thai legends have adopted a young lad from the west of Scotland.

To say the camp has a wealth of knowledge is an understatement, with greats such as Saenchai and Singdam constantly present and willing to help.

Unlike more traditional Thai camps, Yokkao sets out to find and sign up new international talents through Yokkao run fight shows all over the world. This is where they discovered the red-hot prospect, Spencer Brown .

Brown trained out of the Rama Muay Thai camp in Irvine and was very rapidly making a name for himself in the Scottish scene.

He started out young competing in local shows, his potential was apparent even in 2013 when he fought current Fight Record featherweight no. 1, Callum McGowan, it was a very fresh-faced C-class bout where Brown was able to bring home the win.

He was first brought to the attention of Yokkao by their UK matchmaker, Brian Calder who had him on the undercard of Yokkao 12-13.

Brown was swiftly signed to Yokkao’s Next Generation programme, in which they looked to sign young talents early on in their careers.

Brown had mixed Success on the Next Generation shows, one of the more notable bouts though, was against Louis Lee Scott.

Scott, who is now dominating the British amateur mixed martial arts scene, was a fantastic challenge for Brown as a dynamic and explosive striker.

The B-class bout at Yokkao 19-20 was a back and forth affair with a decision which many experienced fighters, like the multiple time world champion Liam Harrison, thought could’ve gone either way. At the end of the bout though, Brown’s hand was raised.

Brown fought 19 days later in Hong Kong, in an unsuccessful three rounder. He was up against hometown fighter Chan Chau Yin who won on points despite being dropped and somewhat soundly beaten by the Scot. After the fight Brown said that “It was an absolutely ridiculous decision.”.

After that questionable decision, he seemingly wasn’t as keen to leave matters in the judges’ hands going into the Bangkok run promotion MX Muay Xtreme, where he was let loose under full Thai rules with four ounce MMA gloves on.

Brown who has dynamite in both hands revelled under the hybrid ruleset as his aggressive style proved too much for his Thai opponent, Lekkar Dabpong. Brown knocked him out just over two minutes into the first round.

Once again, he swapped wins for losses in his return to the Yokkao against a Greek opponent, George Mouzakitis.

At this point in his career Brown was emerging as a strong Thai boxer who had great shot selection and ridiculous power, but he was still raw, which cost him a few decisions as his crowd-pleasing style could be exploited by savvy point-scoring fighters.

Despite the loss, however, he was granted a shot at the ISKA European title.

Brown fought well against his Spanish opponent, Miguel Martinez, countering with hard shots off of the back foot.

Throughout the fight he used his right kick to Martinez’s leg and body to slow him down and score effectively, while his right hand stunted any momentum that the Spaniard was able to get going.

Despite moving backwards throughout the majority of the pro-am affair, Brown’s excellent countering, as well as some slick southpaw work and a strong clinch game was more than enough to crown the then 19-year-old as the 61kg ISKA European champion.

Brown then fought with MX Muay Xtreme in July and August of 2017, both times against Thai opponents and, somewhat unsurprisingly, Brown won both fights in the first round, overwhelming his opponents with his power and handspeed.

August was a busy month for Spencer Brown, as he fought twice, his match outside of MX wasn’t as successful though, as he lost a three-round fight against Glory and now One fighter Chenglong Zhang.

Brown started off well, he was picking his shots and landing clean blows to both the head and the body of his opponent. Zhang’s 40 plus fight experience took over in the latter part of the K-1 kickboxing rules bout.

The fight was close and somewhat tentative, but the more experienced kickboxer was able to use his pressure and ring generalship to garner the judges’ decision against Brown, who was playing the role of the Thai boxer taking on a challenge under a foreign ruleset.

The year was not over yet. Brown bounced back a month later, returning to Hong Kong where he had suffered his first international loss the year prior, and he put a clinic on his opponent, Lui Chun Yin.

He dropped his opponent in the first round and continued to hammer him with big punching combinations as well as accurate and sharp elbow shots whenever the hometown opponent closed in on Brown.

His next two fights where back in the U.K, fighting on Yokkao shows against fellow Scotsmen. In both fights Brown looked levels above his opponents who were both doing well on the regional scene, reaffirming why he was scouted as a prospect for the international stage.

He then stepped up in competition majorly, facing Singpayak PTJ. A 200-fight veteran and a former Chanel 7 Stadium champion.

Singpayak’s jab needled at Brown’s face while his right kick landed with frightening power and accuracy.

The Thai veteran controlled the centre of the ring while hammering his shin into Brown’s back, painting it purple by the end of the fight.

Brown lost the match, but he seemed to take a lot away from it as he has gone undefeated since then until now.

He bounced back, once again in Hong Kong. Having a phone box brawl with Chinese opponent JI Duoyibu.

He was able to show off both his toughness and skill. He was taking a shot to give back two, stapling his elbow into Duoyibu’s face, making his way to a hard-earned three round victory.

That brings us to this year, 2019, where Brown got off to a phenomenal start as he faced Italian Luca Roma for the well-known and coveted green belt; The WBC MuayThai title.

Spencer was fighting for for the WBC European super-lightweight championship at Yokkao 35 in Turin, Italy. Brown used his left kick well and paired it with strong knees in the clinch. He pushed forward with his left liver shot and countered with his right hand.

He looked like a complete and mature Thai Boxer. He looked like a European champion. After five hard rounds against a tough and game Roma who boxed and took space very well, Brown took home his second European title.

Spencer was back in action two months later against Maksim Petkevich who was fighting out of Belarus at All Star Fight in Bangkok. Brown won his second outing of the year on points.

Then Brown was in the ring again another two months after that, at Yokkao 40 in Sidney. His opponent, Albert Xavier, was proudly representing East Timor.

Xavier was a great match up for Brown as his heavy low kicks and forward pressure forced Brown into the role of the retreating technician, a role that he plays very well.

At the end of the second round, despite Xavier’s success moving forward, he ended up with his back to the ropes with around ten seconds left on the clock.

Brown took full advantage of this and threw a right hand which raised Xavier’s guard up followed by a thumping left liver shot. Albert Xavier fell to the ground and wasn’t able to recover. Brown really lived up to his nickname in this fight; the body-snatcher.

His most recent fight was in Dublin, against another hometown fighter, a reoccurring theme for Brown who has fought in seven countries since 2017.

His opponent was Stefan Korodi, who had a similar fight experience to Brown. The fight proved to be a very evenly matched as it was scored as a draw after fifteen minutes of action.

The fight started off with Brown taking the initiative, he was testing the waters with his left hook and using his clinch well as an offensive tool.

In the second-round things really picked up with spencer again doing well in the clinch. Towards the end of the round Brown had Korodi in dire straits.

Brown was hammering him with big shots, whipping the hometown hero’s head back, even flooring him with a right hand at a point, chucking in some clean elbows too for good measure at the round’s end. As the bell sounded the fight looked to be over for Stefan Korodi.

“There’s no way Korodi is going to survive the next round” -Vinny Shoreman, end of round two.

Koridi returned with a surprisingly clear head though, in rounds three and four he was staying out in kicking distance, using his teep to keep Spencer off of him, whenever Brown was able to get to boxing range, Korodi tied him up, scoring well with knees and slowing down Brown’s game.

The fight ended well for both men as they were both able to sweep each other and land big shots in the fifth, Koridi was looking for a big knee while spencer’s kicks where hitting the mark.

The judges saw it even, both men did enough. Both men were winners.

Brown’s career so far has been incredible to watch, as we’ve seen him develop from a raw talent to an experienced fighter who can push forward with ruthless aggression, but also a fighter who can move back and snipe. An ability possessed by a relative few.

As for what’s next for the Irvine lad, hopefully some well earned rest as there was a slight scare late this year due to suspected brain trauma caused by repeated concussive blows.

Once he’s cleared the world truly is his oyster, He is in the same weight class with plenty of beasts such as Mo Abduraham and Seán Clancy. It would be interesting to see him fight for One Championship with the four ounce gloves, since last time that happened, we got three first round KO’s.

Regardless of what he does, he’s came a long way from that young talent blasting through the Scottish circuit, and he still has a long career ahead of him.