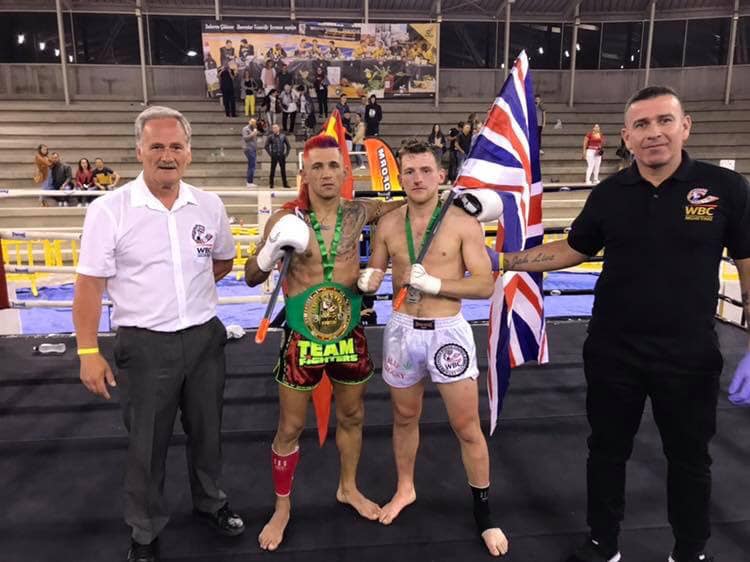 Last night, Spanish star Isaac Araya stopped the UK’s Wade Sword in the second round of their bout to win the WBC Muaythai Super-Featherweight European title.

After the win, we spoke with the Muay Pam Gym fighter to get his thoughts on the victory and discuss what’s next.

Isaac: “I am very happy to get this important and beautiful title. I have sacrificed over 11-years to achieve this dream.

“I have fought in many countries around the world at the highest level, with 37 professional fights, 8 consecutive years of traveling to Thailand, living there for months to continue improving and learning more and more.

“I have fought with many Thai rivals with over 200 fights, always giving my 100% and fighting with my heart. The first time in 2014, I reached the final of the 8-man Nai Khanom Tom Tournament and I lost against a Thai who had 500 fights.

“I made a good fight but I stayed with the honey on my lips when I could not taste the victory, this time was the first time that I could become professional World Champion, but I lost.

“The following year in 2015, I fought again with a Thai for the IMTF World Championship. This man gave me a Muay Thai masterclass. The best Thai I’ve fought without a doubt, from the Sitjaopho Gym, and lost my second chance to be crowned World champion.

“Also, last year I had the opportunity to win the WBC International title. I fought against young and strong Jonathan Haggerty. It was a war! I felt physically stronger than him, in the first round when I threw my first kick, he blocked with his knee and a cut of 5cm opened on my shin.

“He has only fought three times since then and he is already World Champion of ONE Championship. The truth is, he is a very lucky boy.”

“When I saw the cut I was very surprised and in the second round decided not to continue due to the injury, and I lost the third important title.

“With how difficult it is to win big, meaningful titles in this sport, it has not been an easy road for me, so now I am very happy to have won the WBC European title. I think I deserve it after so many years of sacrifice, but I’m not satisfied. I am going to be World champion.”

Isaac: “I want to tell Jonathan Haggerty that I am not afraid of him. I can beat him and will beat him next time we fight.

“The last time he was lucky, he cheated me. He fought with yellow YOKKAO gloves that he had been training with for two months. The rules dictate that they have to be new gloves, like the ones they gave me.

“We fought for the title of 58.9kg and also accepted when they asked me to fight at 60kg two days before the fight. I foolishly give a kg, with your height and away from home, traveling by plane for 5 hours.

“He has only fought three times since then and he is already World Champion of ONE Championship. The truth is, he is a very lucky boy.

“I have fought five times since that fight and I have won two belts.

“I hope to see you again with desire and if it happens at ONE Championship, then it is even better.”