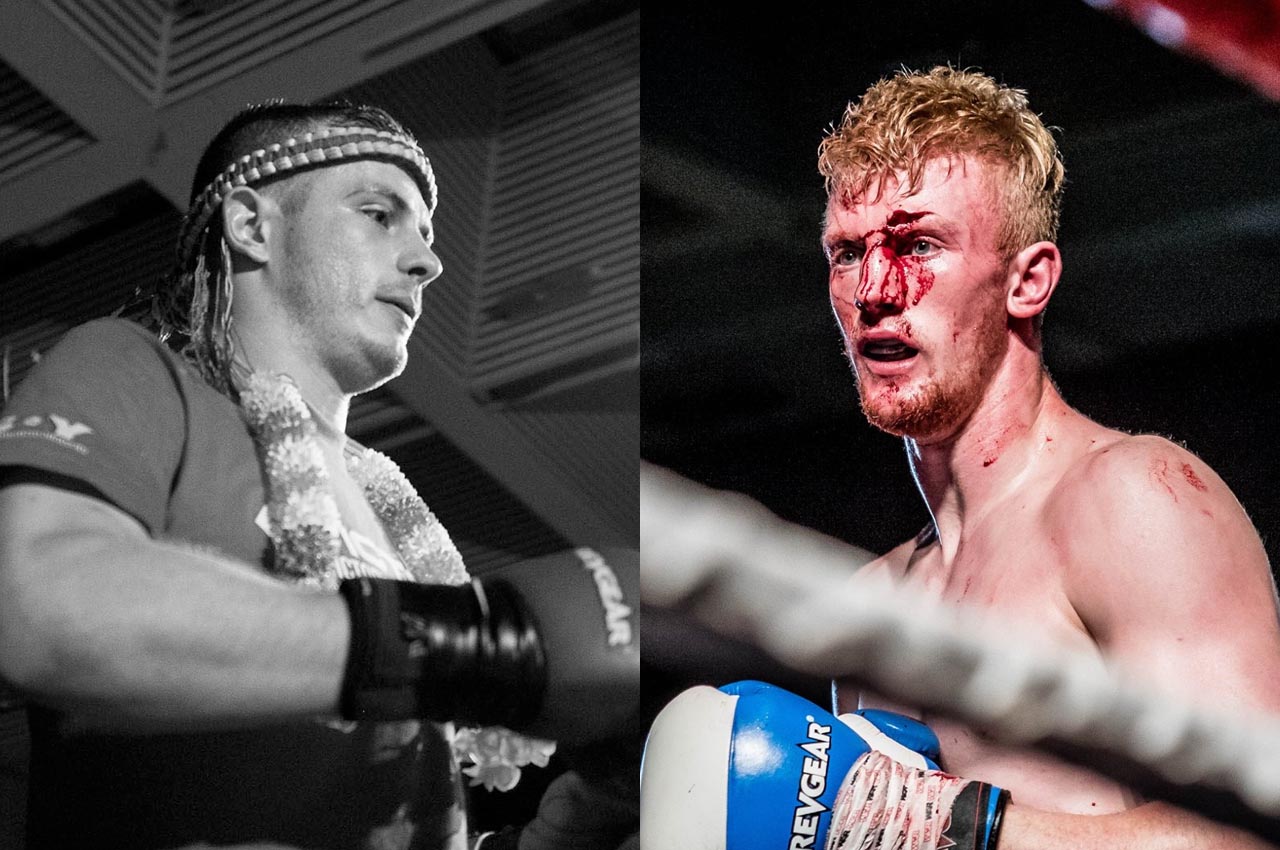 On the 23rd May, Jack Cooper will face Scotsman Alex MacGregor for the UK 69.8KG number one spot. For Cooper this will be his next defence of the UK title since defeating Josh Hill back on Yokkao 47. As the challenger, MacGregor will be getting a long overdue shot at the number one spot having previously been denied one at the 72.5KG limit.

To overcome Cooper, MacGregor will have to break his current four fight winning streak which includes capturing and defending the UK number one spot and the MTGP European title. MacGregor has been on a strong streak himself winning four out of his last six fighters including a win over the current 72.5KG UK number one Niall Brown. Both fighters have spent a significant potion of their careers training and fighting in Thailand and fought around the same weight but this will be the first time they meet on the UK circuit.

MacGregor has continually made a habit of spoiling the home town party. For Reece McAllister’s retirement fight, he forced the fight into a gruelling clinch exchange. Whilst suffering a loss via third round stoppage, MacGregor prevented a typically clinical performance from Reece which we had come to expect. In addition, the Scot also beat Niall Brown on Yokkao 37 in Brown’s home north west region.

Despite his success, MacGregor hasn’t had his victories rewarded with a shot at a number one spot (with Brown seizing the title off Joe Craven in emphatic fashion after his loss to MacGregor). This fight is a long overdue shot at the UK number one spot for a fighter with an extremely distinctive and awkward style.

MacGregor exceedingly tall for the 69 to 72KG weight division with him often towering over his opponents. The typical school of thought for a taller, rangier fighter is to use their length to it’s fullest. Relying on longest weapons like the teep, round kicks and straight punches to keep shorter opponent out of range whilst landing blows themselves. This typically evolves into fights being determined by how well the shorter fighter can close the distance and how well the taller fighter can maintain it.

Despite his obvious size advantage, MacGregor is a fairly aggressive fighter, often preferring to march forward for the duration of fights rather than pick at his opponent from range. During his fight with Niall Brown, the Scot was able to endure Brown’s fast start and continually march him down throughout the bout. By the third round Brown seemed to fade significantly as a result of the constant pressure of MacGregor.

Despite Brown moving into space at every break and opportunity, MacGregor was able to reassert himself as the aggressor within moments.

With Niall Brown fading, MacGregor’s most traditional slow start and then moving up the gears took over. By the fourth round it clearly became MacGregor’s bout, which was needed given the opening two rounds were conceded to the faster starting fighter.

One of the biggest advantages for MacGregor’s height is when he throws knees in the clinch. A mid-height knee for most people would hit the body, with MacGregor that blow is usually enough to catch the head of most opponents. In his bouts, you will often see the Scot try to step around the side of his opponent and push their head away from their base before using the knee.

In this way he was able to finish Jackson Barkhouse in their bout on DUEL.

Similar to Jack Kennedy, MacGregor frequently uses the long guard as a go to defence. Brown showed a great awareness of the vulnerabilities of this guard, using it as a trigger to throw the uppercut and target the exposed body.

MacGregor’s other issue stems from his aggressive style. In acting as the aggressor you give up an element of defence which you would have fighting on the counter. To be an effective pressure fighter you have to accept that you will absorb some punishment. If you leap back each time your opponent throws a shot or shows a feint, you are giving them ground to work with and negating the point of pressuring them. MacGregor’s marching style tends to leave him open to the low kick if you can time his steps and shots to the body.

Similar to MacGregor, Jack Cooper has spent a significant portion of his career in Thailand which is reflected in his attitude in building into a fight. Coming off a strong performance against Jack Maguire on the last Victory show and another defence against Josh Hill, Cooper will be looking to continue his domination of of the Super Welterweight division.

The most distinctive aspect of Cooper’s style is his stance switching, in some bouts he remains in the same stance for almost the entire duration yet in others he will constantly switch between a southpaw and orthodox stance. He shows excellent awareness of what works well in which stances, for example throwing the left cross from southpaw as a counter to an overly aggressive Josh Hill.

He also has a strong left kick from southpaw which he frequently uses into the open side of his opponent, reserving his right kick primarily for low kicks.

Cooper also frequently uses the lean back, a counter to a high round kick. Interestingly, MacGregor has issues with this move when he fought Dan Butler in the early rounds. The Scot frequently missing his right kick as it sailed over the shorter fighter’s lean back. However, Cooper would need to ensure that his judgement of distance is sound, even greats like Yodsanklai were caught unawares by the gangly limbs of Samy Sana in their bout on One Championship.

Possibly the most notable addition to his arsenal in recent times has been his uppercut. Against Jack Maguire it worked a treat, snapping the head back whenever he saw Maguire’s arm begin to extend. The uppercut acted as a stinging shot to occupy Maguire, allowing Cooper to step in with the left knee and begin to use his elbows. Each time Maguire extended his arm, it acted as a trigger for Cooper to throw the uppercut.

On the subject of knees, it will be interesting to see if Cooper can use them as effectively given his opponent’s height else he may be risking low shots.

Cooper has also shown a ruthlessness both in his bouts with Maguire and against Artur Saladiak especially once he has his opponent’s cut. He uses elbows frequently, his competence in the clinch means he is more than happy to step in with a folding elbow and fall into the clinch afterward. Maguire’s corner threw in the towel due to the cuts he sustained at the hands of Cooper’s elbows, a fate which MacGregor will be keen to avoid.

Right tools for the job?

A lot of this bout will depend on how Cooper deals with MacGregor, both tend to warm into their fights so we might see a tentative first round or two. Cooper has shown he has a terrific uppercut to counter MacGregor’s long guard and decent low kicks (either the inside low kick from southpaw or the right low kick from orthodox). A lot also depends on his ability to use lateral movement to avoid MacGregor’s pressure. McAllister showed an excellent check hook which he used to move off the centre line and avoiding MacGregor’s forward march. If he decides to use the lean back his judgement of distance will need to be on point otherwise risk a Sana-Yodsanklai.

MacGregor will likely look to pressure Cooper from the outset, it may do him good however to try and cut of the ring more rather than the straight line approach he adopted with Brown. If he can get Cooper biting on feint right kicks and leaning back, it might also open some interesting openings for the low kick or sweep whilst Cooper’s centre of gravity is off. At the very least it would make Cooper second guess when he should lean back allowing more round kicks to land.

Cooper also does tend to drop his hands and dip quite low at times, especially when he gets confident in a bout. This resulted in a few strong blows received by Saladiak during their fight on MTGP. MacGregor would do well to take advantage of these dips. Even all time greats like Giorgio Petrosyan (by Joe Nattawa) have been caught in this way .

Interestingly, MacGregor also occasionally lets his hands go a little too loose, particularly when he is being the one pressured. During his bout with Alex Akimov, MacGregor took a few shots when he was on the ropes, seemingly overestimating his reach advantage. Whether Cooper will get the Scot to move and stay on the ropes is another matter.