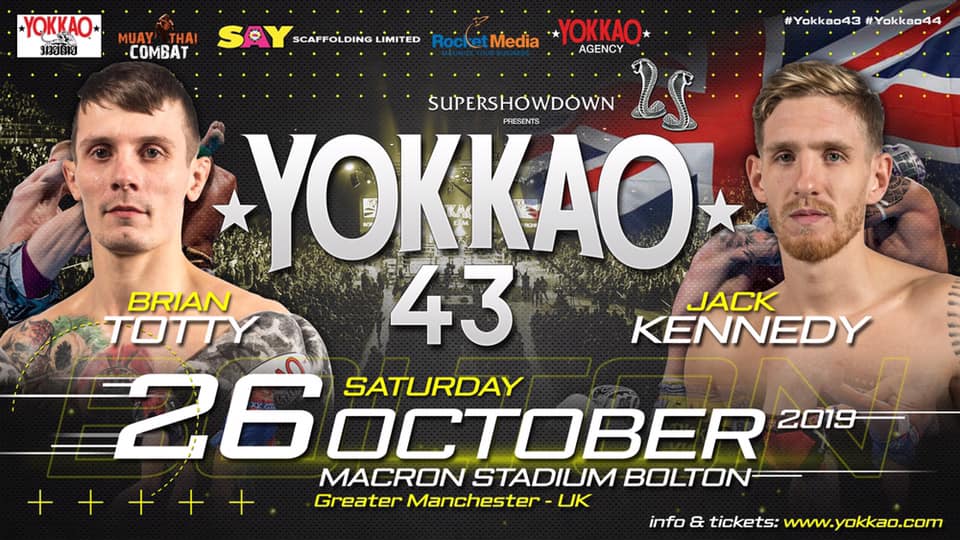 Fresh off a win over Finland’s Kari Viinikainen at Empire Fighting Series in Stockholm last weekend, Kennedy will jump straight back into domestic action when he faces Scottish rival Brian Totty in four weeks time.

The current #6 Welterweight, Brian Totty of Sit Muang Thai gym in Scotland, will be looking to climb the rankings when he faces Kennedy, who has an almost identical fight record.

After a loss to fellow Scot, Andrew Miller, at MTB: Muay Thai Boxing in August last year, Totty got back to winning ways when he beat ONE Championship signed fighter Michael Pham at MTGP 24 in London earlier this year.

His opponent, Kennedy will be making his seventh appearance at YOKKAO, having been in some tough battles with some of the top names to compete inside the YOKKAO ring including, Craig Coakley, Nathan Bendon and Thai superstar Singdam.

This top domestic Welterweight bout joins some already announced huge bouts on the double-bill card set for the Macron Stadium in Bolton on 26th October. Visit the YOKKAO 43 & 44 event page to see all bouts currently scheduled.