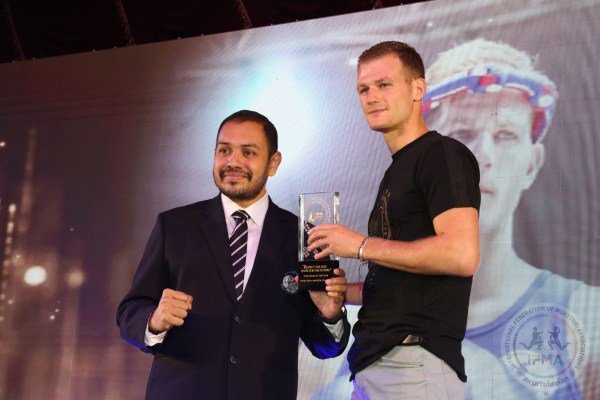 In an official statement released by IFMA earlier today, it was announced Frenchman Jimmy Vienot has been award Best Male Boxer of this year’s championships.

The WBC and WMC World Champion stormed through the -75kg Elite category with five-straight wins on his way to claiming the gold medal in Bangkok last week.

Jimmy Vienot is the perfect example of why IFMA and WMC have unified as one world body. Jimmy is already the European IFMA World Champion and WMC World Champion.

This year, he became part of the French National Team and winning the IFMA World championship in the middleweight division and also being voted by the Technical and Athletes Commission as the most outstanding male athlete of the event.

Jimmy Vienot stated that he is proud to represent France and that the IFMA competition is no doubt the hardest muaythai competition of all.

He said winning the WMC World Title was a one off fight, while being IFMA World Champion means for 6 consecutive days, he had to make weight and fight a different opponent everyday where the best athletes of the world come together. Post 2019 WC win, Jimmy is now looking forward to qualify for the 2021 World Games and World Combat Games.

Vienot further stated that the atmosphere at the venue was electrifying and being part of 102 nations coming to support their own athletes but also coming to cheer for other nations, that is the true spirit of muaythai. When his name was called out at the gala he felt so proud for his family, his gym and the French national team.

Nadir Allouache, President of the French Federation, stated that in France, proper development takes place in order for the top athletes to make the national team. There is a strict one federation policy as muaythai is recognized under the French Federation and IFMA by both the National Olympic Committee and Sports Ministry.