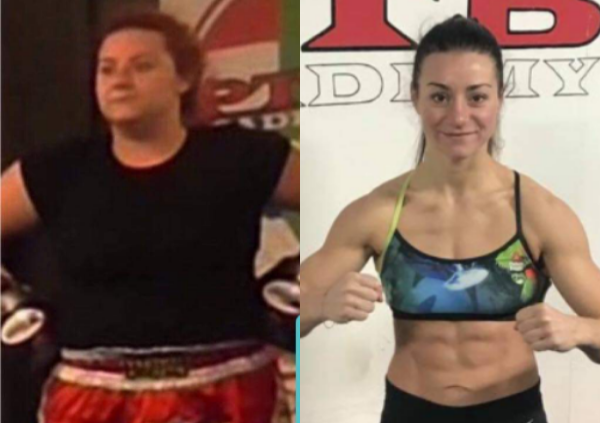 Just four-years ago, featured fighter Jodie Clunan weighed 106kg and began her journey to fitness by starting training in Muay Thai at PTB Academy in Liverpool. Now approaching the end of a successful 2018, she is the current Thai Fighter UK 59kg ranked #2. Read Jodie’s inspiring story below.

“I train hard every day, sometimes up to 4 times a day not including my running!”

“As another training year draws to a close (except my fight training which continues through Christmas!), I can’t help but still reflect on the achievements I’ve made not only in 2018 but since I started Thai Boxing in 2014.

“The weight loss itself is more than enough of an achievement, but this year alone I started with my first fight of the year on one of the biggest promotions YOKKAO at the lightest weight I’d ever fought at 59kg and won against an unbeaten opponent. I moved up to #2 in the Thai Fighter UK rankings for my division and I am now waiting to fight the #1 in February.

“I spent a lot of time this year going back over the basics in Thai and really trying to get techniques spot on, and learning real Muay Thai as an art and not just for fighting. I’ve done countless demonstrations at festivals and events displaying my Wai Kru Ram Muay along with padwork and sparring.

“I then agreed to fight Lucy Payne in my first A-Class fight after only 8 fights in total. Other than being cut I think I was doing more than ok!
I also competed in the CrossFit open and up until fight week where I could no longer participate I was number 4 in Europe for my division and I got my max power clean at 77.5kg while at my lightest body weight.

“I’m fitter, faster and stronger than I was in 2017. I will never ever forget where I’ve come from and what it is I’ve achieved to reach this point. It wasn’t handed to me, I have to train hard every day, sometimes up to 4 times a day not including my running!

“As always, I couldn’t have done any of it without PTB Academy and Dockside Fitness Liverpool believing in me from day one, even when I was 106kg, you genuinely won’t find another gym like it! I’m looking forward to what 2019 is going to bring me, with the goal to be as active as possible in my fighting it should be exciting !! Let’s do it !!”

Meal Plans and Weigh-Loss with Jodie

“The plans couldn’t be cheaper, and that’s so the plans are affordable for EVERYONE! Some nutritionists will charge £100+ for a similar plan and charge you to monitor them afterwards too!  If you follow the plan, the plan works, It’s THAT simple!

“£20 to get your weight off safely while still eating 3/4 meals a day with snacks is invaluable in my eyes! If you’re eating properly, your training will 9/10 improve too as you’re fuelling your body with the right energy!

“People also asked, ‘do the plans also work for people who aren’t fighting?’; the answer is yes! I have a client who started just 2 weeks ago, hasn’t stepped foot in a gym and has lost 10lb!”