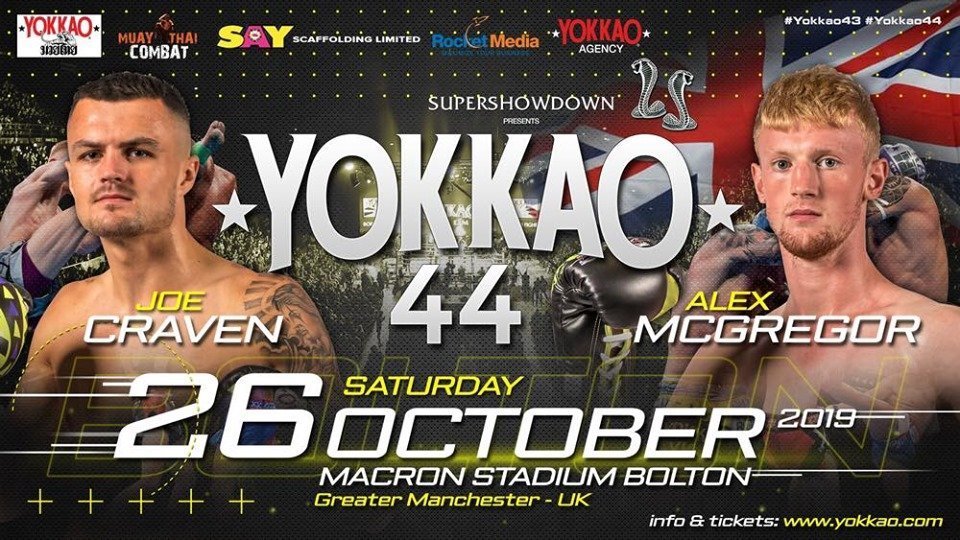 In announcement made by YOKKAO on Tuesday, it was released that UK 72.5kg #1 Joe Craven will be facing Super-Welterweight #8, Alex MacGregor, at YOKKAO 44 at the Macron Stadium in Bolton on 26th October.

Craven, who remained unbeaten in four at YOKKAO after a unanimous decision win against the returning Christopher Shaw at YOKKAO 38 in March, will return after six-months out of action to face talent Scottish star Alex MacGregor this October.

After beating Scotland’s Christopher Shaw to retain his UK #1 spot at YOKKAO 38, Craven went on to face arguably the best 72kg fighter on the planet, Youssef Boughanem, on his PSM Fight Night home show in Brussels, Belgium just 4 weeks later.

However, after a heartly display in the early rounds, Craven suffered a broken nose and was subsequently stopped in the fourth round.

Craven was then scheduled to return on his home show at Science of 8 which took place last Saturday, however injury forced the bout from taking place, and now YOKKAO look forward to welcoming him back to the ring when he faces MacGregor on 26th October.

Scottish fighter Alex MacGregor, who is ranked #8 in the 69.8kg division, will be moving up in weight to challenge for Craven‘s #1 spot in October.

The 23-year-old is on an unbeaten streak of his own, having beaten tough Irish fighter Alex Akimov at Rumble in the Bay 5 and a strong win over Niall Brown at YOKKAO 37.

MacGregor is the slightly more experienced of the two fighters, having many fights in Thailand in recent years, and is a worthy challenger for Craven‘s crown as the best Middleweight in the UK.