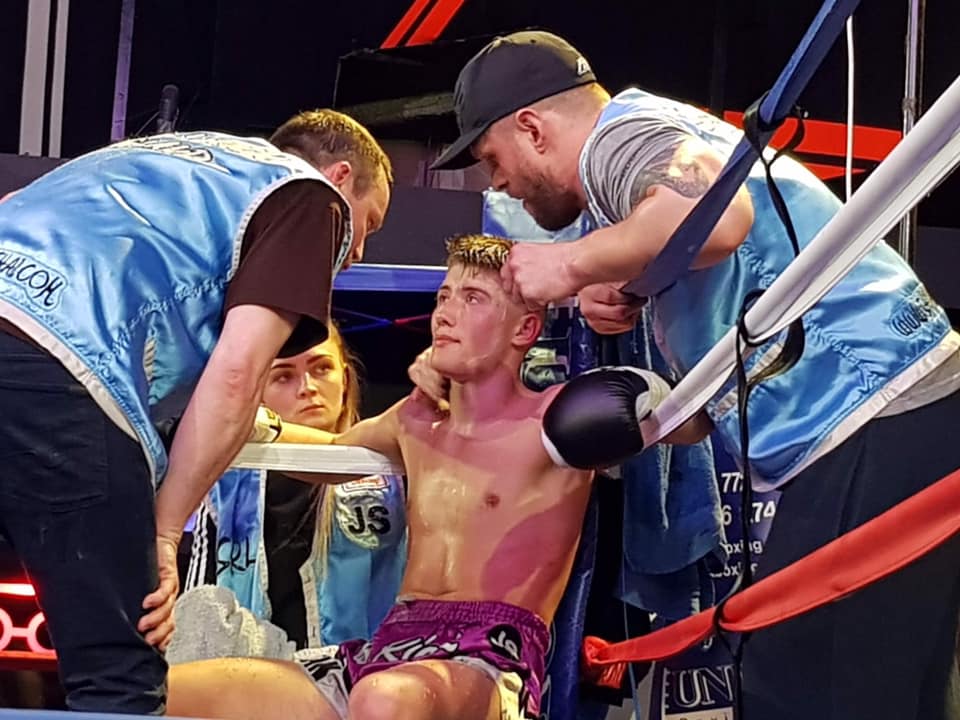 This Saturday, two of the Thai Fighter UK’s top 10 ranked featherweights go head-to-head in an intriguing clash on the main card at Shinkick Showdown in the South of the UK.

Current Featherweight #5, Jack Nunn, will make the journey east from his hometown of Okehampton in West Devon to face current #7 Joe Turner on his home show Shinkick Showdown in Guildford, South-West London.

After a loss to Corey McLachlan at Blackpool Rebellion in June last year, the Shinkick Muay Thai fighter travelling to Samui, Thailand for training and competition. He tells us about his experience;

Joe: “I fought at Chaweng Stadium. It was my first experience in Samui however it wasn’t my first trip nor my first fight in Thailand. I’ve had two fights over there now and both times I’ve taken on some really tough Thai’s with a lot more experience than me.

“The experience I gained from both of those fights has been unforgettable. The most important lesson I’ve learnt from Thailand is that heart is such an important aspect of a fighter.

“The first time I fought in Thailand I was around 15/16 years old and fought a Thai that was 25+ and had 150+ fights to his name. I took a beating in that fight and lost on points, however still gained a lot of respect from the heart I showed considering my age and experience compared to my opponent.

“The second time in Thailand I fought (my most recent) was against a very, very aggressive Thai that tried taking my head off and smash my legs up from the first bell. I took a lot of damage however came out with a big win over a great Thai fighter in Samui. I gained an injury in that fight resulting in me not being able to fight for the rest of the year.”

When asked about what he knew of his upcoming opponent, Joe responded;

Joe: “I don’t really know anything else about Jack other than I know he’s very aggressive and likes to go in for the kill whenever he has an opportunity.

“As some people may know, Corey beat me on points last June and shortly after Jack stopped Corey in their fight. If I’m going to be honest, this didn’t faze me in the slightest, as I know, styles make fights and some fighters have different strengths and weaknesses.

“I know Jack’s a strong boxer and has an aggressive style so I’ve been working on changing my style up a bit and bring the fight to him a little more whilst standing my ground.”

With both fighters now ranked in the top 10 in the UK in the Featherweight division, we asked Joe what his fans can expect to see from one of the first top domestic fights of the year;

Joe: “Personally I’m really excited for this fight as I’ve done everything in my ability to get me in the odds of winning and I can honestly say I cannot wait for it, I’m expecting a war on Saturday from the first bell and the fans in my local crowd are all backing me.

“Last time I fought locally I felt unstoppable and came out with a solid win. I’m hoping to put on a masterclass and stop Jack’s winning streak.”

Joe: “At the moment I have one fight lined up after this on Muay Thai Grand Prix in April against a great opponent on a great card at the O2. I am buzzing for that one!

“In terms of this year’s goals, I’m not actually sure what I would like to achieve out of 2020. All I know is that I’m going to train to my full potential and take every opportunity that comes my way, including climbing the featherweight ladder.

“I’m looking to be very active this year as well as also going back to Thailand if all goes my way. Long term goals is very similar to most Muay Thai fighters around the World and that would be to eventually get signed for ONE Championship.”