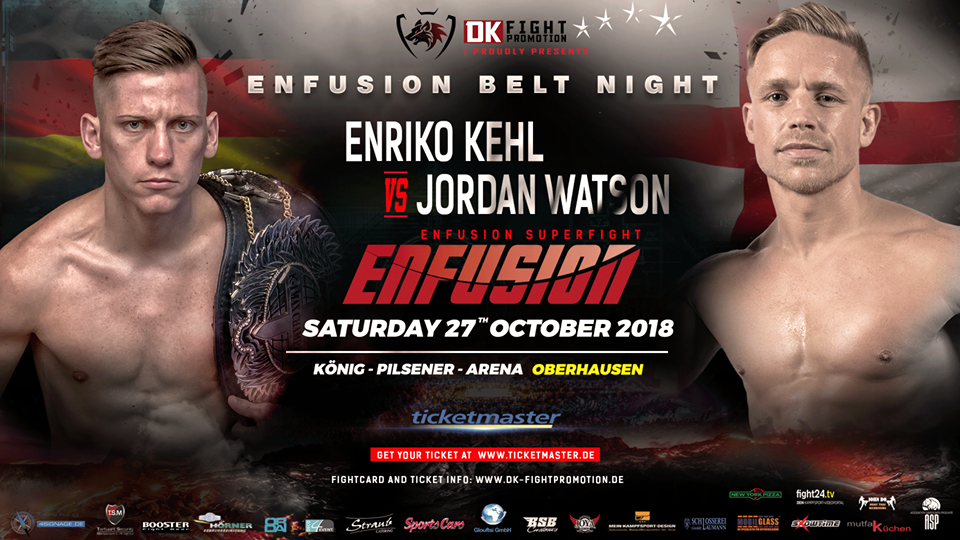 On the 27th October, Enfusion will be hosting one of the biggest kickboxing clashes in recent history between Britain’s own Jordan Watson and Germany’s Enriko Kehl. Both men have fought the who’s who of kickboxing at one of the most competitive weight divisions in the sport. Both men share common opponents such as  Buakaw, Yodanklai and the current Glory lightweight champion Sitthichai Sitsongpeenong. Curiously, despite these similarities the two have never met each other in the ring, in fact the closest was in 2014 when Watson knocked out Juri Kehl (Enriko’s brother) in the first round with a brutal head kick.

The bout will take place under Enfusion’s modified rule set, taking most of the rules of K1 but also allowing clinch work provided it remains active. The fight will take place in Oberhausen, Germany making Kehl the home favourite, this does not mean however that Enfusion have given him an easy task squaring him up against Watson.

More than a big right kick

Jordan Watson is arguably one of the UK’s most recognisable kickboxers. Fighting out of Bad Company gym in Leeds with trainer Richard Smith, Watson has been fighting at the highest peaks of international kickboxing for close to a decade. This will be Watsons first fight back since November 2017, due to a hand injury which kept him out of competition. After nearly a year out it will be tough test for Watson to get back in the ring with an opponent such as Kehl.

A common misconception about Watson’s fight style is categorising him primarily as a one trick powerful right kicker. Whilst Watson does have one of the most powerful right kicks at the weight, his setups and tricks he uses is what makes his kicks so lethal. When he fought Pongsiri PKSaenchaiMuayThaiGym on Yokkao 28, Watson spent most of the first round pressuring the physically smaller man against the ropes. The essence of a good pressure fighter is getting the opponent to overreact to the expected blows. More often than not it is these expected strikes which never actually come that get the recipient to open themselves up to the genuine blows.

This allowed Watson to use his powerful right kick with a reduced risk of being countered whilst increasing the probability of it landing. In the second round, Watson began to engage in a hand battle with Pongsiri by using his jab to draw out his opponent’s hands. Watson kept this probing jab up through the majority of the round drawing Pongsiri’s hands further and further out. Watson baited another jab and as Pongsiri went to parry the blow, Watson executed a right high kick. Pongsiri had over extended his guard expecting another jab which allowed the kick to land flush. The Thai was unable to recover Watson won the bout by KO.

Watson’s boxing is often underrated having been overshadowed by his obviously powerful kicks. In an early bout at Yokkao 23, Watson put on one of the best performances of his fight career in terms of the control he held over the bout. Central to this once again was his jab, flicking it out at regular intervals at his opponent Sorgraw Petchyindee. The jab is typically taught as a range finder for following strikes, however it can also be used for obscuring the vision of an opponent. Thus, allowing the attacker to take more dominant angles for further strikes. Watson also used the jab to first distract his opponent, then whilst retracting it peel away his opponent’s guard. This then provided him with an entry for his lead elbow against the exposed head of Sorgraw.

Enriko Kehl, like Watson, has fought the best fighters in the 70Kg category in international kickboxing. His achievements include avenging his previous loss to Buakaw by beating the Thai in the final of the 2014 K1 Max tournament. As well as fighting Giorgio Petrosyan to a decision on the Italian-Armenian’s home turf back in 2015. On that occasion Kehl’s performance was marred by a distinctly biased referee, who refused to penalise Petrosyan for a number of sweeps. Despite the move being illegal under the K1 rules of the bout, Petrosyan used the move on a number of occasions without receiving any admonishment frustrating Kehl. However, when Kehl used the sweep he was given an instant warning, not perhaps the fairest employment of the rule set. One must assume fighting one of the most successful kickboxers of all time on their home turf is likely to bring such discrepancies.

Kehl fights out of a southpaw stance and like many of the best left-handed fighters, has an excellent left cross. Kehl will often fire this off as a single powerful shot down the centre line of his opponent. In a southpaw vs orthodox stance match up, the rear hand straight is more likely to land than in a same stance match up. This is due to how the opposite stance setup naturally allows the rear hand a direct path from its starting position to the opponent’s head. More unusual than these single powerful crosses are how Kehl occasionally throws the left straight whilst ducking his head in close to his opponent. He then throws either a spinning elbow or fist to catch his opponent as they attempt to exit the engagement. Combined with Kehl’s spinning back kick attempts has led to his nickname ‘The Hurricane’.

Kehl often prefers to control the centre of the ring and will go toe to toe with his opponent to fight for it. Control of the centre of the ring has a number of inherent advantages, you are at the furthest possible point from getting stuck along the ropes. Controlling the centre also make it easier to cut off an opponent’s movement, with each step forcing the opponent to take 2 to 3 more simply to avoid being cornered.

One of Kehl’s favourite combinations to achieve this ring dominance is a walking 2-1-2. After throwing the boxing combination he then either clinches the opponent to throw the knee or (if the opponent is moving out of range) the low kick. You can see him employ this strategy over and over in his bout with Mohammed Medhar. The combination forces the opponent to back up from the centre of the ring and hands control to Kehl. From there it opens up a new array of potential offensive options for Kehl.

What makes this bout so exciting is that there is rarely an international match between two such experienced fighters who have never before met in competition making this uncharted territory. Kehl will have to be wary of Watsons powerful right kick, this means he will need to focus on his boxing combinations to close the distance and keep the pressure on the Englishman. Else Watson will surely be content to pick him apart with his kicks at range. With Enfusion’s modified rule set, Kehl may find success with working his way into the clinch with Watson and using his knees to reduce opportunities Watson has to use his kicks.

Watson’s best work comes when he is the aggressor and intelligently using his jab to build on his kicks. If he can establish this early on in the fight and whilst keeping the fight from evolving into a box to clinch battle, he could give Kehl a rough night. The difficulty comes from throwing the kicks whilst also not overextending or not resetting quickly allowing Kehl an entry.

In truth, it is hard to give either man the advantage to this bout. Both have fought, beaten and lost to a long list of shared opponents. The only major difference being Kehl decision loss to Petrosyan compared to the TKO loss Watson suffered. On that occasion Watson was caught with a shifting right hook which rattled him and allowed Petrosyan to finish him with strong cross to hook combinations. However, Kehl was also stopped by a counter by Chingiz Allazov when he attempted to step in, proving how split-second errors can end a fight. On paper it appears to be a matchup where either man could win on any given night making this one of the most interesting matchups of the year. Both fighters will have to be on top form if they want the victory come Saturday.