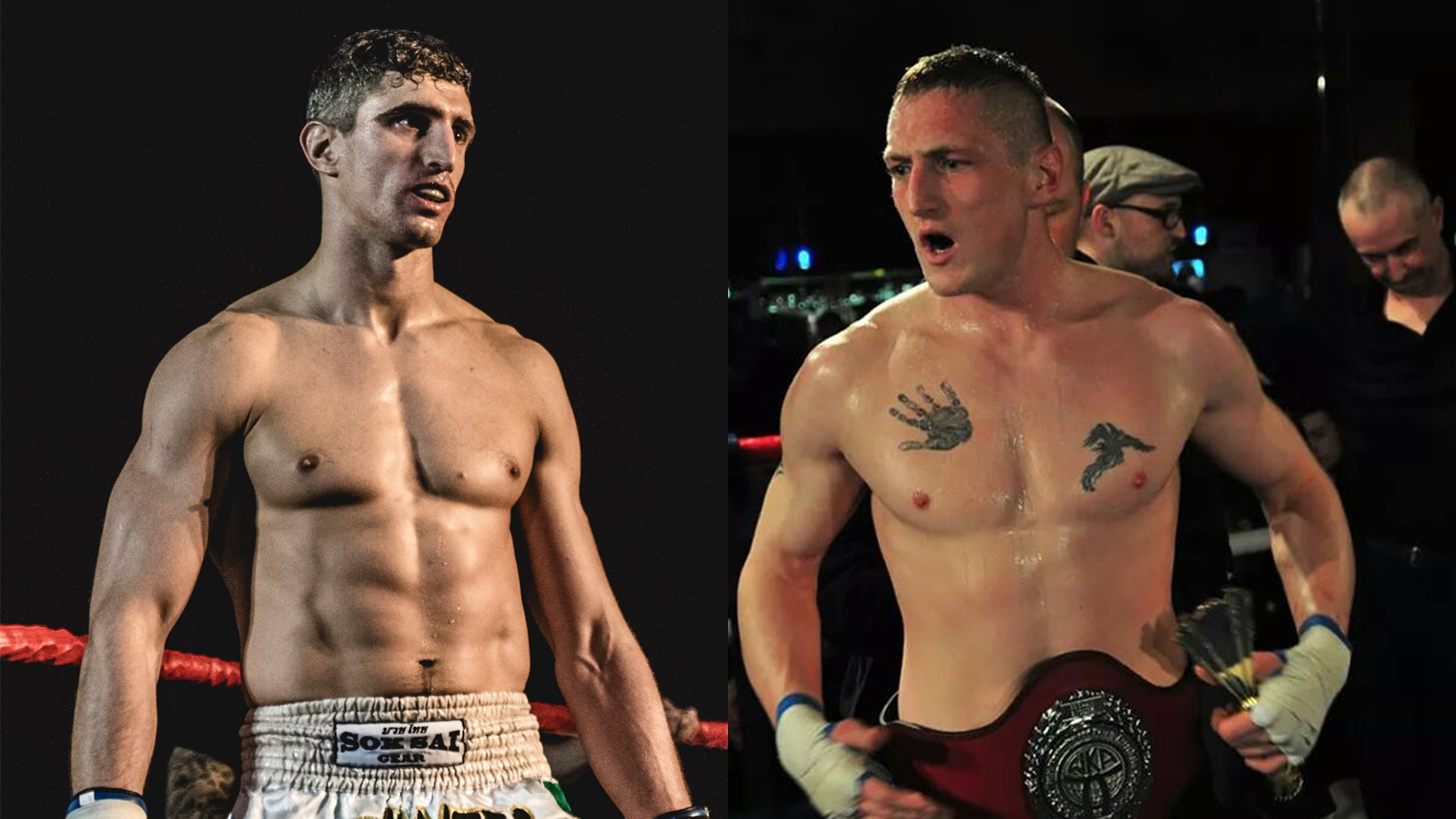 On the 8th December the fight for the UKMF 86.16Kg British title will be fought between Juan Cervantes and Darren “Dynamite” Anstey. For Cervantes it will be a step up in weight from the class he currently sits atop as the UK number one. As for Anstey, it will be an opportunity to crown himself as the king of the division he has fought in for much of his career.

This bout comes as part of Victory Promotions’ already stacked show in Dunston. Including a four-man tournament between four of the best fighters the UK has to offer.

Cervantes is a name which has dominated the North East fight scene for a number of years. Carrying a respectable record 28 wins, 8 losses and 1 draw, Cervantes is coming off his latest win at Enfusion in June. On that occasion scoring a first-round knockout of the experienced Mehdi Fassal via a perfectly timed head kick. Cervantes is currently ranked number one in the 82.5Kg division and so is stepping up a weight class in attempt to become a two-weight title holder.

With this step-up in weight comes the inherent risks, the main one being the increase in force which means knockouts are more common. This is especially prevalent when going against a fighter such as Anstey who is a powerhouse in the division. Cervantes always comes in excellent condition for his fights and is often the larger fighter, so it will be interesting to see how the step up in weight affects these factors.

Cervantes last defended his number one spot against the experienced Roan Morrison at the Lee Smith Memorial show last year. Cervantes used a number of pivots whenever Morrison attempted to open up his offence. Cervantes would step to his right to avoid the blows (as opposed to moving straight back which could still allow Morrison to land). Using the acute angle Cervantes then used his chopping low kicks to the lead leg of Morrison. In the second round Cervantes moved his opponent to the ropes and noticing Morrison was hunched forward, used a jumping knee. This coupled with the forward posture of Morrison resulted in the knockout win.

Indeed, the flying knee has become somewhat of a trademark move for Cervantes. In this short clip you can see how Cervantes moves off to the side to nullify his opponent’s offence before using the jumping knee as he moves back in to range. These pivots however simple, mean that Cervantes isn’t retreating on a straight line. Moving off to the side means his opponent has to change direction to effectively land with strikes. It also gives Cervantes the opportunity to counter an overly aggressive opponent from a dominant angle.

Despite the obvious athletic talent and highlight reel knockouts, Cervantes still has strong fundamentals at the heart of his style. When he took on Catalin Filimon, Cervantes kept his guard tight not allowing his opponent a clean shot. It was quickly apparent that Cervantes could handle the punching power simply by ensure his chin was covered. Throughout the fight the low kick became a key part of his offence. Rather than throwing it naked Cervantes would set it up with his boxing combinations.

Filimon was soon desperate to check these kicks often shelling up with his leg raised to check the incoming kick. Rather than throwing the kick immediately Cervantes kept the boxing combination flowing until Filimon was knocked off balance and forced to put his leg down. Then the low kick would then come, this is a simple yet effective trick than Ernesto Hoost used successfully for his whole career.

“Dynamite” Anstey has fought most of his recent career at 86Kg making him the more experienced fighter at this weight. What becomes instantly apparent when you see Anstey is how he fills the weight category. He is a strong fighter even for such a high weight category and comes in excellent condition. Whilst he may not have the longer frame of Cervantes his powerful build lends itself well for throwing powerful blows which he does to devastating effect.

Anstey is due to fight on the 6th October in an 8-man 85Kg tournament. Part of the prize will be a multiple fight contact for Glory, the world’s leading kickboxing organization. This will be an excellent test of Anstey’s abilities and a good litmus test of how his upcoming bout with Cervantes will go.

Anstey is the definition of a fast starter, often coming out swinging within the opening seconds of a fight. When he fought Romello Da Silva, Anstey quickly pressured his opponent into the ropes and kept him there for the rest of the fight. Anstey showed an excellent variety of strikes not just head hunting with his punches but also targeting the body of Silva with right straights.

When Silva attempted to counter, Anstey stepped back out of the way then instantly moved back in to continue his barrage. Anstey is a strong proponent of the elbow in his fights. Rather than using an upwards elbow to break through the guard, Anstey prefers a “12 to 6” elbow. Instead of throwing an elbow in a hook or uppercut like fashion, Anstey does the opposite raising it up and bringing it down on his opponent’s head.

This is a brutally effective technique and can cause deep cuts to the head. Anstey caught Silva with one of these and caused the fight to be called off due to the severity of the cut. This has been a signature strike for Anstey and has stopped a number of his opponents via this method. This includes his recent bout against Mehdi Fassal on Yokkao where the fight was called off in-between rounds.

The difficulty for Anstey comes simply from the fact that an ultra-aggressive approach to fighting consumes a lot of energy. Such a high output is near impossible to keep up over a number of rounds. Whilst a high starting pace and mean you take out your opponent early on and minimize the amount of damage you sustain, failing to do so can result in fatigue for the remainder of the fight.

When Anstey fought Malid Salimi it was noticeable how much Anstey slowed down by the second round. Rather than cutting off the ring for his opponent, Anstey chased him around the ring giving more space to his opponent. Although Anstey was able to finish his opponent with another downwards elbow, it was a clear chink in his armour.

This is another reason why the 8-man tournament in October will be an interesting test for Anstey. To win he will either need three extremely quick finishes (a tall order for any fighter) or fight more conservatively over the course of the tournament. This is heightened by the removal of elbows (due to the fights taking place under kickboxing rules) which stops Anstey from using his tool of choice for an early stoppage.

An obvious game plan for Cervantes would be to try and draw out the fight into the later rounds. Anstey’s fights rarely go the distance so making him carry the weight of those extra minutes would force him to fight more conservatively. Front kicks would help both to keep the pressure fighter off Cervantes whilst progressively winding him further slowing his advance. Then in the later rounds open up more offensively whilst Anstey tires.

Of course, that also means Cervantes has to face the brunt of the early assault in the opening rounds. Not only keeping a tight guard but also being aware of his position in the ring. Anstey has the ability to punish his opponent should they get pinned against the ropes with his powerful barrages. Pivoting off and tying up when Anstey gets too close will be key to achieving this (whilst making sure he does not use the clinch to land elbows from close range).

Anstey on the other hand will probably want an early finish if possible. This will involve herding Cervantes towards the ropes, ensuring he doesn’t pivot off into space. Cervantes is savvy enough that simply chasing him will not work. Anstey will need to cut off the ring to prevent Cervantes from exploiting any space. Once Anstey gets Cervantes against the ropes he will need to make the best of it. The best-case scenario is Cervantes gets cut from one of Anstey’s elbows resulting in a stoppage. Else Anstey will have to rely on his pressure to tire Cervantes using body shots and low kicks to aid him.

Whatever the game plan this will be an excellent fight and challenging for both fighters. Cervantes has been undefeated domestically for a number of years, but will the step up in weight prove too much of a challenge? And can Anstey use his energy more efficiently or will he rely on finishing his opponent in the first round?