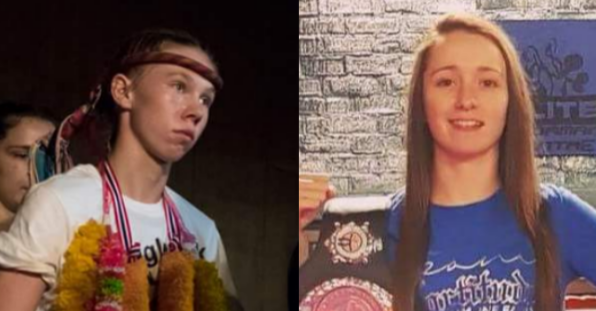 The momentum is starting to build for the highly anticipated Victory IV Muay Thai show on 8th December with another high quality bout added to the main card this week; Leigh Newton of Phoenix Thai Boxing in Shildon faces Becky Caslin of Furtitudo gym in Liverpool in a 48kg A-Class bout.

Leigh, who fought out a technical battle against Paloma Arranz on the Lee Smith Memorial show last December, was part of the Team GB squad that flew out to Cancún in Mexico earlier this year for the 2018 IFMA World Championships. Although contested under amateur rules, the level of competition at the Championships is far from that, and after picking up two wins and a close decision loss over the week, “Pocket Rocket” proved she can compete with the very best in the World.

Since the Championships, Leigh has gone on to beat the Swedish Sofia Holmer at Enfusion Newcastle in June, and most recently a win over #8 Lena Kessler in an A-Class bout on S3 Fight League in Coventry this past weekend (replay available at UK Fight Scene). Now back in the north-east, the Phoenix Thai Boxing prospect is determined to continue the good form and put on a good performance in front of a home crowd at Victory IV in December.

Leigh “The Pocket Rocket” Newton is ready for any challenge at 48kg. She trains hard and is determined to get to the top of the 48kg division. – Gaz McAllister, Phoenix Thai Boxing

Liverpool-based Becky Caslin will be the taller of the two fighters. Boasting a 13-1 record with many accolades to her name, she recently beat Portugal’s Monica Santos on Inferno Championship with a dominant performance in her hometown to win the 47kg WTKA World Title.

The 22-year-old from Furtitudo gym used her height advantage to control the distance, landing teeps and low-kicks that kept her opponent at bay, taking the unanimous decision. Replay of this fight is available here on UK Fight Scene.