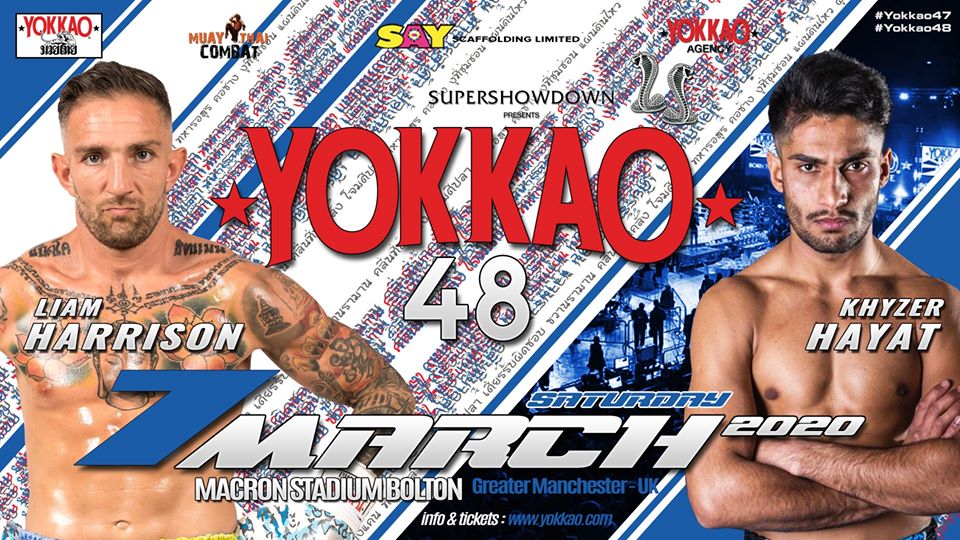 Originally Liam Harrison was scheduled to face Frenchman Jeremy Payet for the main event of Yokkao 48. However, Payet has since been pulled from the fight due to injury whilst in training, Yokkao have since found a replacement in Spaniard Khyzer “The Destroyer” Hayat. Whilst less well known on the European circuit than Payet, Hayat prevents a very different challenge than the Frenchman

More than just a low kick

It is nearly impossible to talk about Liam Harrison without going into at least some detail regarding his low kick. This particular technique has become synonymous with Harrison’s fight style and one of the reasons he continues to be a fan favourite. However it would be a mistake to assume that there is no underlying methodology or strategy behind this technique.

Typically a low kick is taught to be thrown in an arcing movement, bringing the leg up above the target, stepping across and bringing the shin down. It can be likened to the movement you would fell a tree with an axe. In terms of power there is no other low kick variation which will allow as much to be generated. That being said, Harrison’s low kicks angles straight from its point of origin to the thigh of his opponent. Whilst it might generate less power than the arcing variation, Harrison generates plenty of momentum to deliver a stinging kick which has broken many world class fighters. The direct angle of attack also minimises the telegraph and chance of a check, allowing Harrison to quickly stack multiple kicks.

On his last Yokkao bout against Cristian Faustino, you can also see the variety of ways Harrison sets up the low kick. First of all by probing the opponent with his jab, once his opponent becomes desensitised to responding to the jab and begins to lean into it with their front foot, Harrison unloads the low kick. The uneven weight distribution makes it difficult for Faustino to intercept when coupled with the direct trajectory and speed of Harrison.

Harrison also typically doubles up on the low kick, throwing the first naked with lesser power. The opponent checks, relaxes thinking they have blocked the attack before Harrison throws a second more powerful kick on the now relaxed leg.

A notable improvement in Harrison’s bout against Faustino was his use of boxing. Whilst Harrison has also had powerful boxing (especially the left hook) he sometimes appears to under utilise it. In his bout against Charlie Peters, Harrison scored well with his switch left kicks but then remained a little too inactive between this scoring. Peters then edged ahead using a mix of boxing and kicks which allowed him to take the decision.

In the Faustino bout, Harrison’s boxing looked excellent, filling in gaps between the left and low kicks. The combinations themselves weren’t particularly fancy but they were brutally effective. Doubling up on the left hook first to the head to get Faustino to cover up before ripping the second to the body. Alternately, he would use the jab cross before ripping the body with his hook.

The knock-down in the fourth round came as a direct result of Harrison feinting the kick before rocking back into the hook. This seamless integration caught Faustino out and result in the eight count being given. Harrison tried the same trick again but switched the left hook for the right straight.

Another nice addition to Harrison’s arsenal was finishing off his combinations with the jab. Rather than getting into a tit for tat combination trade. The jab stunned Faustino enough so that he wasn’t able to counter effectively. It is much the same way Rico Verhoeven will finish with the teep to avoid a return, Harrison’s jab does the same but whilst keeping the opponent in range.

As a performance it was probably one of Harrison’s most completed to date in terms of the balance between his typically favoured weapons and his previously under utilised boxing. Although it is doubtful Harrison will display his boxing skills as much in ONE Championship events (with the smaller gloves favouring kicking matched rather than slug fest which can catch even the wiliest boxer out) Yokkao 48 is a perfect platform to continue his new found integration.

Facing Harrison and making his Yokkao debut, is Khyzer “The Destroyer” Hayat. However unoriginal the nickname, the Spaniard presents a very different challenge from one that Jeremy Payet would have set Harrison.

Hayat has an extremely active style bordering on frantic. In shorter three round bouts he will often rush his opponent and try and fluster them. This has achieved some strong results with Hayat able to catch his prey cold, scoring early counts with his powerful right cross. In his bout against Juan Martos, Hayat dropped him in the opening seconds whilst Martos was still attempting to settle. Across appears to have a strong base fitness level with him able to sustain these long bursts of activity across entire rounds.

Hayat has an extremely active stance, constantly bouncing on the balls of his feet as a means to draw reactions and mask his actual advances. He nearly always uses this stance to then throw the jab cross, using the jab as a cover in the face of his opponent before replacing it with the cross. It is usually only after the 1-2 that he will link a kick or knee, rarely will you see him engage in a kick for kick exchange.

Hayat does occasionally try to anticipate counters after his 1-2, slipping on a backwards diagonal before throwing the cross over the opponent’s own rear hand. He does this fairly infrequiently and only seems to do it if he feels as though he has the upper hand. Else Hayat will typically stick to the bouncing 1-2 combinations and unloading once his opponent’s have their back against the ropes.

A good matchup for Harrison?

On the face of it, this bout seems to suit Harrison’s style, he has proven on numerous occassions how effective he is at countering aggressive opponents with the low kick. His left switch kick is also a brilliant tool to keep Hayat’s arms pinned to his body and head. In the first round of his bout against Petchmorakot, Harrison did extremely well countering the Thai with the left kick. If Harrison can slow Hayat with the low kick, the Spaniard’s bouncing 1-2 style will also be less effective.

In addition, it appears somewhat unlikely that Hayat will be able to rush through Harrison given The Hitman’s experience. Rushing depends on flustering the opponent and the level of opposition Harrison has fought does lead one to think that he will not be drawn into opening himself up to Hayat’s cross.

Hayat might actually be best suited trying to draw Harrison onto him. Harrison tends to stick to the low kick and left kick whilst being pressured, giving less opportunity to get caught by the cross. Backing up might make Harrison more likely to open up with his combinations, giving Hayat an opportunity to find the mark.