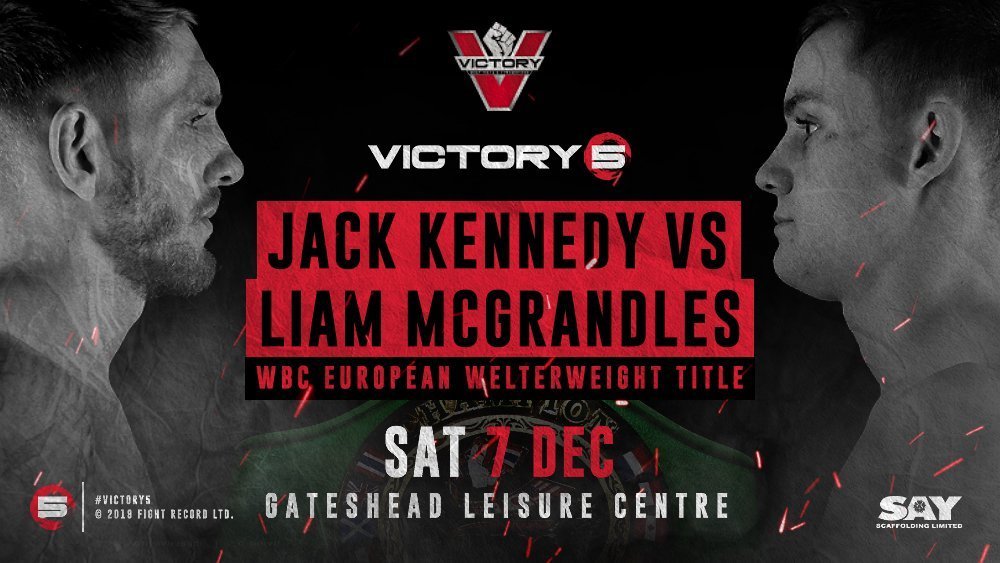 In April earlier this year, Liam Mcgrandles won the WBC European title with a stoppage win over the tricky Swedish fighter Kenny Hong at Roar Combat League 13 in Birmingham.

The newly crowned WBC European champion, who is ranked #7 Welterweight in the UK, had his sights set on climbing the rankings and targeted the current #3 Jack Kennedy as his next fight.

On the Monday following the WBC title victory, Mcgrandles and his team were quick to call out Kennedy in a post we published about what’s next for the Corefit UK fighter.

Kennedy himself responded with a message of his own; “If you’re willing to defend the title then you have a fight.”

Now, the Victory Promotions / Fight Record team are pleased to announce Liam Mcgrandles will defend his WBC European title against Jack Kennedy this December at VICTORY 5.

Two of the most active Welterweights in the UK will collide for Europe’s prestige prize in an all English clash that has had fight fans in suspension for months.

Other than an extremely close split decision loss in a kickboxing bout in May, Mcgrandles has been unstoppable in recent years, holding an impressive win streak, avenging two of his early career losses, and collecting a British title and two European titles along the way, as well as his most recent win against Checkbin Thammasat for the WBC International title.

Kennedy, however, is a lot more experience than his opponent with twice as much ring experience. Not only that, but he has fought many Elite level opponents with experience that far out-weighs his own.

Facing Thai fighters such as Singdam, Somchai Lueamlam, Tananchai Rachanon and Changpuak Pongtong in the last year, Kennedy will bring a level of fight IQ that Mcgrandles has seldom experienced.

Whoever comes out the WBC European champion in this bout, it is sure to be a memorable bout that will live long in the history books between two of the finest talents in the UK.