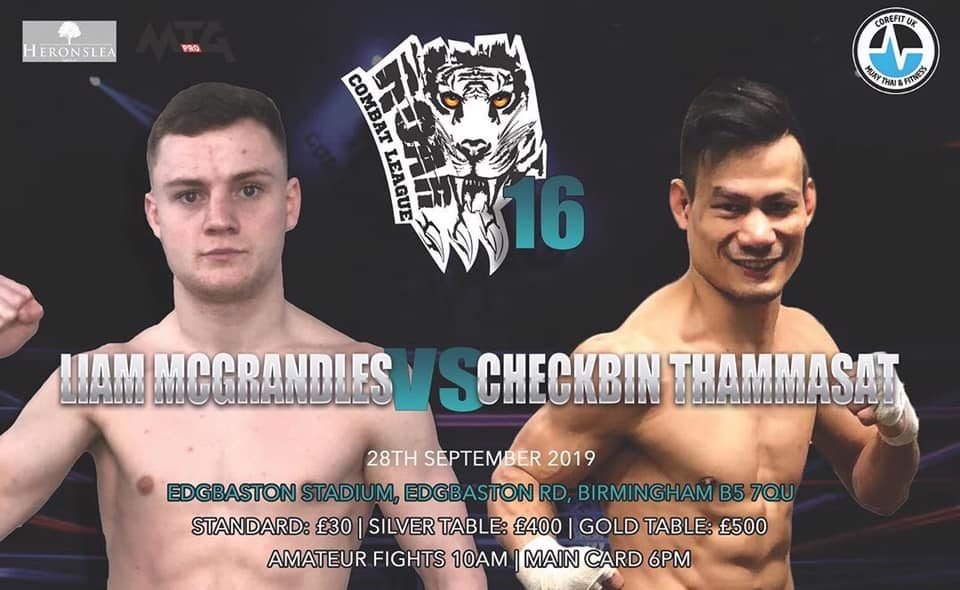 McGrandles, who won the WBC European title with a win over Sweden’s Kenny Hong back at Roar Combat League 13 in March, will now step up to face world opposition Checkbin Thammasat, who lives and trains in Finland.

With 230 fights under his belt, Thailand’s Checkbin has won numerous titles across his career, most recently the WBC International title with a third round KO win over Frenchman Arthur Dutome in Italy, and currently sits #12 in the WBC World rankings at 66.6kg.

The younger McGrandles, who has made it in at #19 at 66.6kg in the most recent WBC World rankings update, has been unstoppable recently.

He’s picked up five-straight wins under Thai rules, including victories over highly ranked opponents such as Spain’s Nauzet Trujillo and avenging a loss over Jack Cooper.

With a bronze at last year’s IFMA World Championships and re-selection for this year’s IFMA’s, coupled with two British titles and a European title, it’s a clear sign the Birmingham-based young prodigy McGrandles is ready to step up to face the World’s elite.

McGranles took to social media soon after the announcement to have his say;

“I’ve worked non-stop for the last 7 years for an opportunity like this. I’m facing World ranked #12 with 230 fights on his record. Big upset on the cards.”

The fight will take place at the Edgbaston Stadium in Birmingham at Roar Combat League 16. For all the latest news and updates on this and more, follow us on Facebook and Instagram @fight_record.