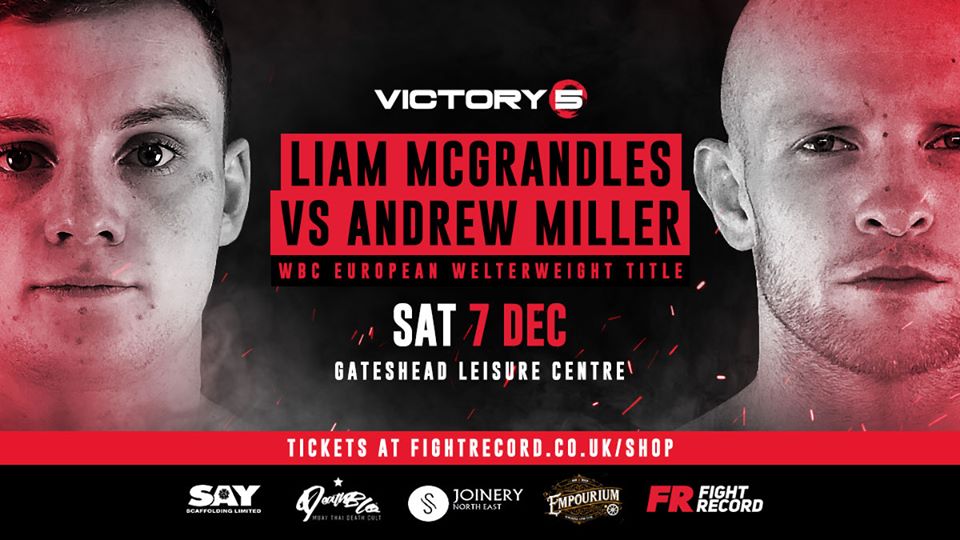 Headlining VVICTORY 5, Liam McGrandles will looks to defend his recently acquired WBC Welterweight European title against ONE Championship veteran Andrew Miller. Originally scheduled to face Jack Kennedy, however injury forced his fellow Englishman to pull out of the bout. That being said, Miller is an excellent substitute with significant amount of experience facing world class opposition included the likes of Rodlek and Mohammed Bin Mahmoud.

Whilst Miller will be looking to add the European title to his accolades, this will be an opportunity for McGrandles to show he belongs on the international stage. A win over Miller would likely interest promotions such as ONE in featuring such a talented fighter.

Liam McGrandles is currently 17-4 and is a two time British and current WBC European Champion and has gone from strength to strength. The past two years has seen a high rate of activity with him amassing wins over the likes of Jack McGuire, Kenny Hong and even beating Jack Cooper in a rematch on Victory IV. The level of improvement he has shown is astonishing and he shows no sign of letting up anytime soon.

As previously mentioned, on his last appearance for Victory IV he managed to outclass Jack Cooper, after previously losing to him. Cooper is one of the best in the UK currently ranked at #2 at super welterweight, a win over him so no mean feat.

During the bout against Cooper, you can see one of McGrandles favourite patterns. He often likes to time the switch left kick into the open side of the opponent as they step in. With them committing with their feet, it becomes difficult to check the kick. This worked effectively against a number of opponents such as Hong and Cooper. During the second round, Cooper walked onto this numerous times, building the score in McGrandles favour.

Whilst on the offensive, McGrandles prefer to use the right low kick to the lead leg of an orthodox opponent. Throughout the bout, he picked at the lead leg of Cooper, keeping him wary of placing his feet during either moving forward (due to the switch kick) or on the back foot. McGrandles also showed a liking to the right straight to the body, a criminally underrated shot. Being the longest body shot in a boxer arsenal, it is also brutally effective at taking the wind out of the sales of an opponent. This was either thrown with a jab to raise the guard to expose the body or as a single power shot.

It looked like Cooper had issue making the weight, and the consistent picking at both he legs and body yielded good returns for McGrandles. By the fourth round he was effectively bullying Cooper around the ring, keeping him against the ropes with the teep.

Once McGrandles has worn down Cooper, it became apparent that he was simply to sharp and quick. Whilst only a split second too slow, Cooper struggled to land with any consistency. It was much like the bout Cooper had against Ricky Sewell at MTGP Manchester, Cooper in that case was simply that little bit faster and was able to land and exit before Sewell could respond.

Andrew “Mad Dog” Miller’s record stand at 34-17-2, whilst not as higher win percentage as McGrandles, many of Miller’s losses come against the colossuses of Muay Thai. A loss against Rodlek is hardly something to be ashamed of. Despite the world class fighters at ONE Championship, Miller has had some success. Most recently in a unanimous victory over Mohammed Bin Mahmoud.

Miller started the fight extremely aggressively and went hunting early with the low kicks. Throwing them both as a single shot and then doubling up on the low kicks. Causing Mohammed to check the first kick but then relax prematurely, allowing the second to land. Whilst a simple technique, many world class fighters such as Liam Harrison have made careers out of effectively landing the low kick.

The effect of the smaller gloves also played a part, with Miller able to catch the kick of Mohammed and deliver a short right hand to his chin. Dropping Mohammed toward the end of the first round, Mohammed came out aggressively to try and even the scorecards but was turned into the clinch by overreaching with his shots and finished the round without evening the scorecards.

The damage from low kicks also added up, this resulted in Mohammed being dropped once again. Whilst he was able to see out the second round, it became clear that Mohammed was completely dejected when he went back to the corner. It appeared he simply wanted to see out the fight rather than harbouring any ideas of evening the scorecards.

Miller looked a lot more comfortable in the clinch than Mohammed in both trading knees and sweeping his opponent off his feet. In particular, Miller was excellent at raising the elbow of Mohammed and slipping under his arm to gain a dominant side position in the clinch. This enabled him to score with knees to the side and back with little fear of retaliation.

Often Miller used a swing right overhand, either it would connect with Mohammed or loop round the back of his head. Giving Miller purchase to pull him into a clinch engagement. By the final round, Mohammed simply sank to floor each time the clinch was engaged in an effort to save himself from the damaging knees.

During the third round Miller once again dropped Mohammed with a right hand to the chin. Had he not attempted to clinch immediately after throwing the strike, the ref would probably have called the knock-down but as it was did not. The rest of the round turned into a rinse and repeat with Miller hammering in low kicks and pulling Mohammed into clinch engagements earning him the unanimous points victory.

Miller is an ultra aggressive fighter and will often move forward even if it is to his detriment. During bouts where he has been hurt or knocked down, he will often get up and try to fight fire with fire with mixed results. More than often this simply puts you more in danger of getting hurt whilst your faculties are not at a hundred percent. This ultra aggressive style also plays well into McGrandles switch kick counter on opponents as they move in.

Whilst being the bully is often preferable, simply continually walking onto shots isn’t the most sound strategy. If Miller wants to do this against McGrandles, he has to make it pay dividends, he can’t simply follow him around the ring and take numerous switch kicks. If he move in a takes a kick he needs to reply either with his kicks or by dragging McGrandles into the clinch and wear him down there.

The question mark for McGrandles lies in whether or not his clinching abilities are on a parallel with Miller’s. If not then he needs to be able to stall out the clinch should Miller get a hold of him by using the knee shield or keeping the Scotsman’s hand pinned with over hooks on the arms.

It will also be interesting to see if McGrandles can wear down Miller into the later round with his straights to the body. Indeed if McGrandles decides to go on the offence, how will Miller react?

Whilst it is a disappointment we won’t see Kennedy face McGrandles, Miller is an excellent fighter who is used to fighting on the largest stage in the Muay Thai world. VICTORY 5 will be an opportunity for them both to make their mark.