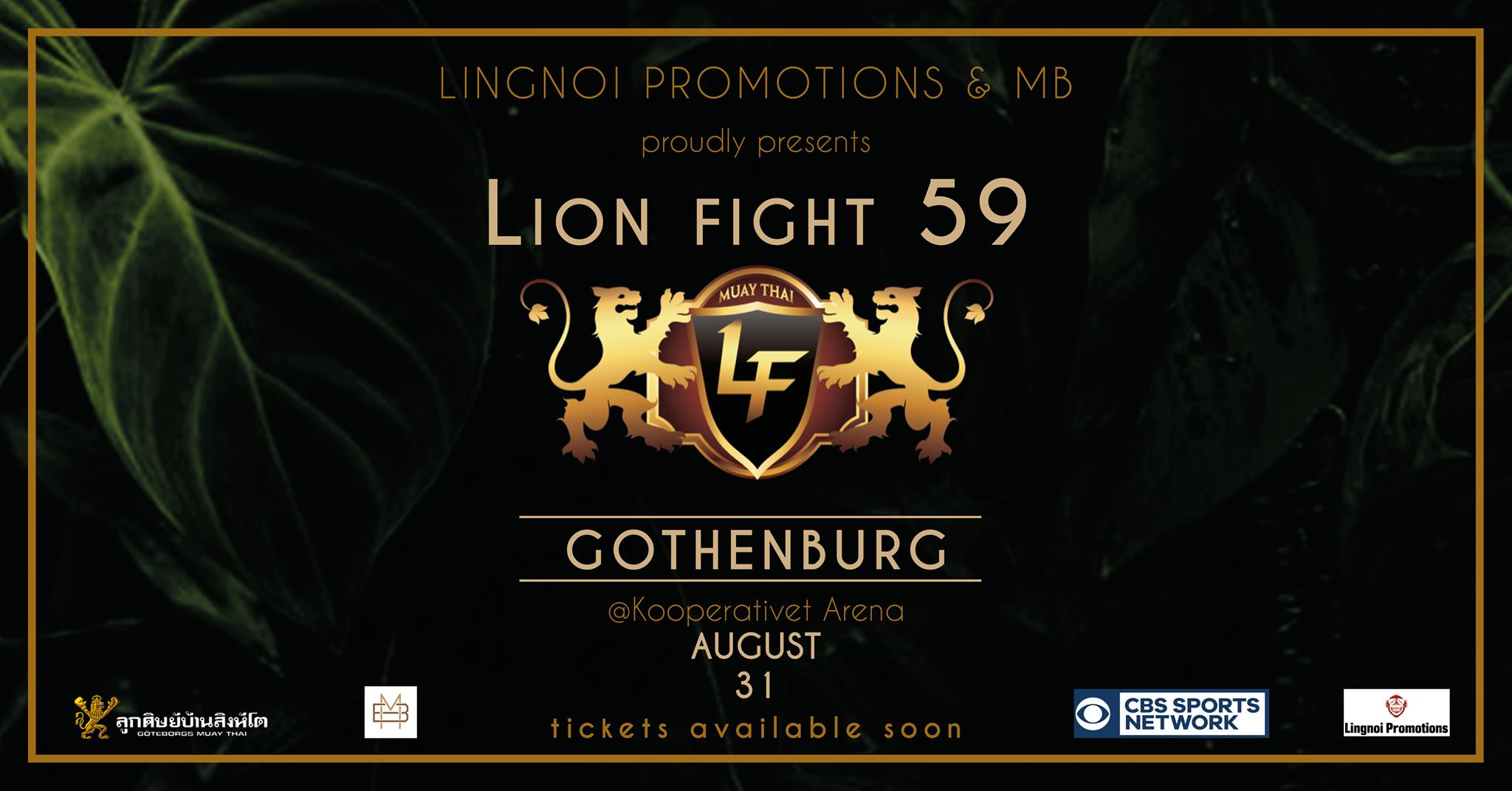 For the first time ever, world renowned Muay Thai promotion Lion Fight arrives in Scandinavia for Lion Fight 59 in Sweden.

Lion Fight continues its global expansion as the promotion is set to debut in Scandinavia on 31st August at the Kooperativet Arena in Gothenburg, Sweden.

The event is hosted by the Swedish promoters Lingnoi Promotions & MB together with the Las Vegas based Lion Fight Promotions.

The Scandinavian power duo Patrick Thomsen and Malick Bah, who also run Thomsen & Bah Management, are very excited to bring this to their hometown of Gothenburg as this marks Lion Fight’s first visit to Sweden.

The main card will air on CBS Sports Network on tape delay (broadcast time TBA) and the whole event will be streamed live in Scandinavia (info about the stream TBA).

“Our partners at Lingnoi & MB have been wanting to team up with us for some time”, said Lion Fight CEO Scott Kent. “We were able to get the right date and location. Gothenburg has really become a hotbed for Muay Thai.

“The previous Lion Fight events in Europe have all been extremely successful, so adding Sweden to our list just raises the bar even higher”, he added.

The fight card will consist of one prelim fight, 6 undercard fights and 4 fights on the main card. Two of the main fights will be World title fights, including the current Lion Fight World champion Amy Pirnie defending her Super-Flyweight title against Thailand’s Lommanee W. Santai.

“We will present a complete line-up for Lion Fight 59 very soon as we plan to announce several fights in the next couple of weeks. I’m 100% confident that the crowd will be very pleased with the fight card”, said promoter Patrick Thomsen.

At the moment, Amy Pirnie and Lommanee are considered to be the best pound-for-pound female Muay Thai fighters in the world. This is a battle that will go down in the history books.

“We decide to give the audience a proper mix of international top level fighters as well as up and coming Scandinavian fighters. As it looks now, we have fighters from Scotland, Thailand, Norway, Denmark and of course Sweden” said Malick Bah.

Among other fighters that also have been confirmed for a title fight is the Swede Magnus ”Crazy Viking” Andersson. He’s fighting out of Revolution Gym in Phuket and will have shot at the vacant World Super-Welterweight title.

Among other fighters are the 4x Swedish Champion Mathias Jonsson, who was seen at YOKKAO in Hong Kong earlier this year when he went toe-to-toe against Thai legend Singdam.