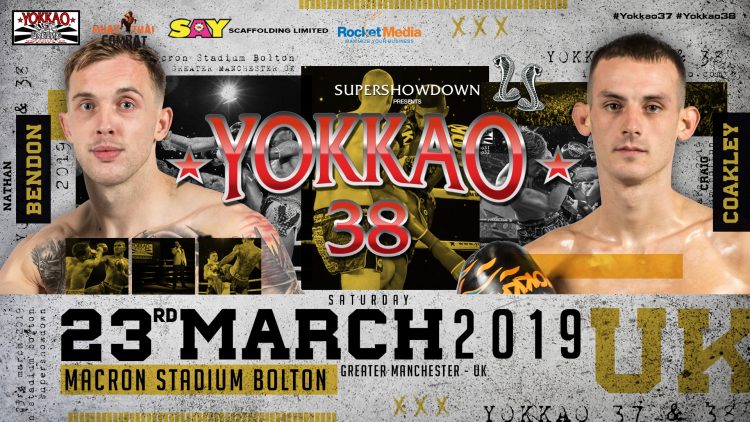 At was announced by YOKKAO earlier this evening that UK 63.5kg #1 Nathan Bendon will face Dublin Combat Academy‘s Craig Coakley at YOKKAO 38 at the Macron Stadium in Bolton on 23rd March 2019.

Birmingham-based Nathan Bendon cemented his place as the UK #1 when he beat Chris Shaw in his hometown of Glasgow at Power of Scotland 26 back in May this year. His most recent outing was against Rambo Phet Por Tor Aor at YOKKAO 32, where he took the fight on less than one month’s notice after Liam Harrison withdrew due to a hand injury.

Bendon lost a close decision to the Thai stadium champion, but a strong performance in a memorable match-up proved he can hold his own against the World’s elite fighters. Now returning to YOKKAO for a third time, he faces another tough test in the KO artist Craig Coakley.

Coakley has become a regular on YOKKAO cards after winning his three previous bouts at the Macron Stadium in Bolton. Beating UK favourites Myk Estlick, Chris Whittle and Jack Kennedy all by stoppage, the Irishman will be keen to continue his win streak on YOKKAO and cause an upset against the UK #1 Bendon at YOKKAO 38 on the 23rd March.