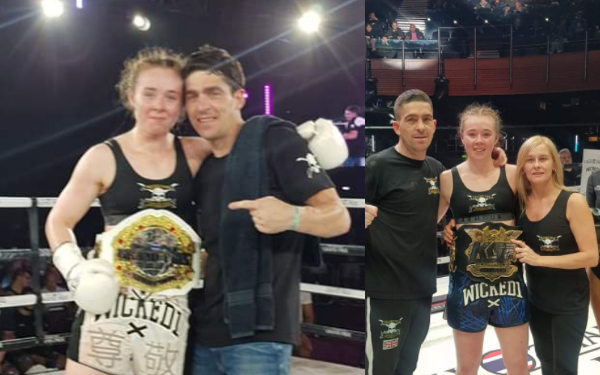 UK 59kg #1 Niamh Kinehan became the MTGP Lightweight World champion when she beat Sweden’s Isa Tidblad at MTGP 27 in her hometown of Manchester this past weekend.

After beating Sarah Worsfold for the KGP World title back in November last year, Niamh now becomes the first ever fighter to simultaneously hold two-sport World titles under the MTGP / KGP brand.

Fighting in front of her home crowd at the BEC Arena, Niamh looked in control through the contest, outscoring her opponent in every round. She looked physically strong and was able to throw her opponent numerous times.

In the third round, Kinehan unleashed a barrage of elbows, cutting her opponent. The Swedish fighter Tidblad was tough and kept coming forward, but it was a clear victory for the newly crowned double World champion.

Taking to social media after the bout, Niamh took time to reflect on the win and thank the people who make it possible;

Last night I won the MTGP World title against a tough Swedish opponent! Thank you to my coach Frankie Hudders for everything. All the hard work we put in is paying off and everything you said to me at the start of our journey together is happening now! I can’t explain how much I appreciate it.

Thank you to all who came to support. No better feeling than 160+ cheering me on.

Thank you also to Philip Tieu and all of the MTGP crew!