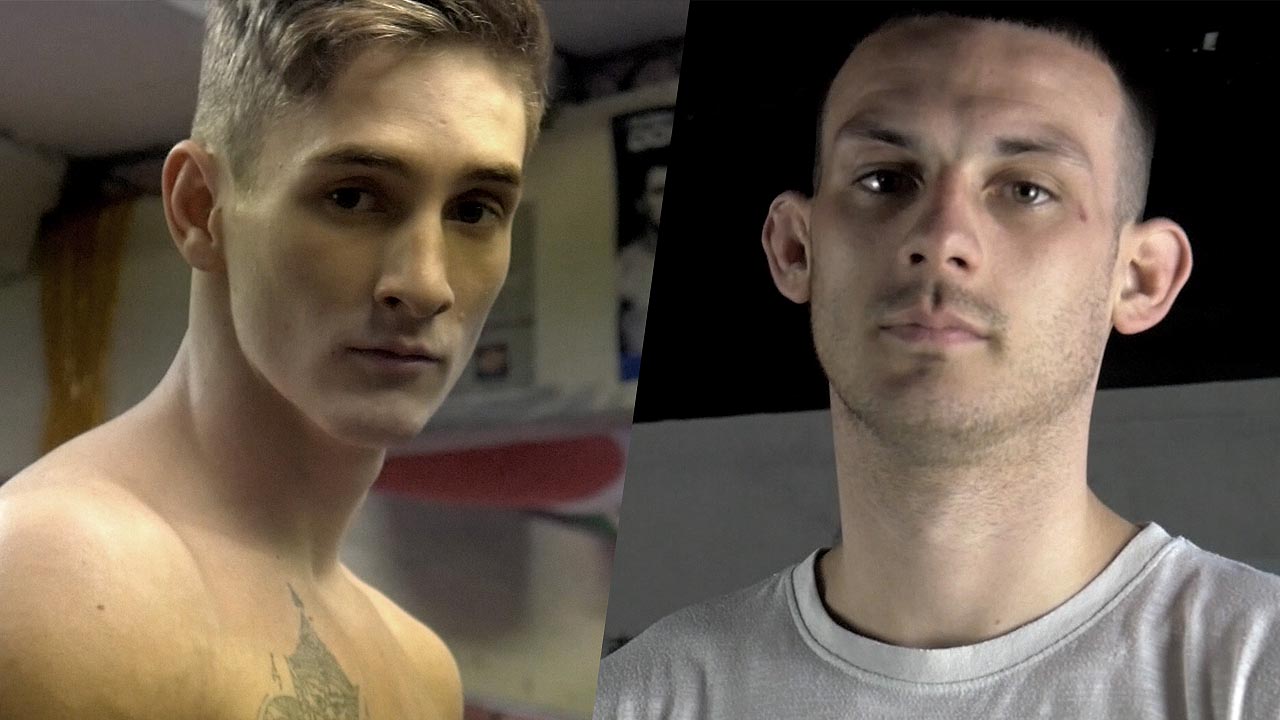 Headlining Victory Promotion’s event on Saturday 22nd May is Scotland’s Nico Carrillo versus Ireland’s own Craig Coakley. Coakley comes into this fight the more seasoned and experienced fighter having fought the whose-who on the UK and Irish circuit. Meanwhile, Carrillo is coming off a dominate performance on UAM and fast stoppage on the last Victory held in December 2019.

Both fighters are at interesting points in their career for different reasons. For Carrillo this fight represents a huge step up in the competition and standard he has faced thus far. For Coakley, this is a fight for redemption after a three fight losing streak which seems almost unthinkable for a fighter of his quality.

The King of the North

Fighting out of the newly formed Deachkalek Muay Thai Gym, Nico Carrillo has been on somewhat of a tear in recent years. The Scot has won six out of his last seven fights and cemented himself as the UK number five at 63.5KG. Probably his most notable win so far would be his stoppage over Shane Farqharson back in 2017 on the Lee Smith Memorial Show.

Whilst his bout against Farqharson was a fairly technical and measured performance from Carrillo, he has since adopted a much more aggressive style. This was notable as soon as his next bout against Alex Dass Rey as he consistently pressed the Spaniard. The aggressive style Carrillo has utilised culminated most recently into an incredibly dominant win over Muhaamadi Jakhongir on UAM in February of this year.

Muhaamadi started the bout quickly attempting to put Carrillo under early pressure, however the Scot was quickly able to settle him with punishing low kicks. Carrillo has also made feints a more prevalent part of his arsenal in recent years which made their appearance from the outset. Typically using a hip twitch to feint the kick but also more elaborate elbow feints once he had grown in confidence.

The mix of feints and low kicks seemed to quickly overwhelm Muhaamadi as he effectively became a free target. He didn’t seem to offer much in the way of a deterrent or attempt to counter, by the end of the second round he seemed more like a walking punchbag. The count in the third round secured the victory for Carrillo by unanimous decision.

Kenny Hong of Sweden offered a more interesting bout, whilst Nico was equally aggressive. Hong at least tried to give back as much as he received. Whilst the Scot scored well with his powerful left switch kick, Hong did have moderate success with his boxing. Carrillo has a tendency to pull back on a straight line which allowed Hong to catch him with shifting straight shots as he pushed forward. Carrillo’s forward pressure also caused him to walk onto a couple of shot, although he responded in kind.

The two most concrete criticisms you can make of Carrillo is that when he gets confident he does let his hands drop and becomes less attentive regarding his defence. The second is when he feels he has his opponent in trouble, his shots can become a little wild. Preferring to load up on his strikes rather than maintaining his position in the ring and picking his shots. That being said, had he not swarmed on Farqharson when he had him hurt, Carrillo might not have had the stoppage.

Carrillo’s game changing shot is his left hook to the liver. Both Gorka Caro Miguelez and Farqharson had their nights cut short by this blow (Gorka in the very first round). The Scot generally throws this as a single shot without much tell. Even if he does not find the liver, this blow can take the wind out of even an experienced fighter’s sails.

Back to winning ways?

Coakley is in an unusual position in his career, prior to 2018 the thought of Coakley losing three bouts in a row seemed ludicrous. The Irishman was straight off his TKO win over Jack Kennedy on Yokkao 32, another victory against a top UK ranked opponent having already beaten the likes of Myk Estlick and Stephen Meleady.

First came a loss at the hands (or rather elbow) of Mo Abdurahman with Coakley throwing a spinning elbow and turning his head directly into the path of Abdurahman’s. Next came a decision loss to Thai legend Singdam and most recently an extremely controversial loss to George Mouzakitis on MTGP. Coakley has not looked bad in any of these bouts, he was caught with an elbow nobody could have predicted immediately after delivering Mo a count. He kept the bout with Singdam competitive which is more than many westerns are capable of. And he had a razor close fight with Mouzakitis resulting in a decision which is still debated. Nevertheless, Coakley will be be keen to remind people why he has been a force at 65KG for a number of years.

Coakley’s biggest strength has been his balance between volume of strikes and the sting he puts into them. Often fighter’s will be drawn into either low output with more intent in each strike or vice versa. Coakley manages to keep his output high whilst not throwing himself into every shot. This is partly the reason why he has managed to gradually overwhelm some of the best fighters in the UK and Ireland.

Against Myk Eslick, Coakley was ruthless in his execution. Early on probing for opening and then repeatedly exploiting those he found. The Irishman used the uppercut to great effect, snapping the head back over the hunched forward posture of Estlick.

He also targetted the body with a variety of strikes, using the more common hook to the body as well as the less common straight cross when at a further distance.

His use of knees were also key in getting the stoppage, typically ending his boxing combinations with one. Whilst he had more space in this bout, Coakley showed excellent timing with knees when Mo was pinning him against the ropes.

This continued bodywork did cause the typically frenetic pace of Mo so slow and even caused him to take a standing count. Against Estlick it was his downfall having taken punishment from Coakley who was also significantly bigger at the weight.

Coakley might not have the “one shot” stopping power in his boxing that fighters like Liam Harrison or the most thunderous kicks like Jordan Watson. What he does have is a proven skill to wear down opponent’s, particularly with his knees and boxing. And an aptitude to ruthlessly exploit any weaknesses or opening he can find.

Interestingly, both fighters have lost to George Mouzakitis albeit in different manners. Carrillo seemed to struggle with Mouzakitis’s pressuring style. With his space suffocated, Carrillo’s offence seemed less effective or determined. This was a number of years ago, and it wasn’t until after this and the Farqharson that we saw the more aggressive attitude and style.

Coakley on the other hand met Mouzakitis in a toe to toe battle over a shorter three round bout on MTGP. Both fighters had their moment but Mouzakitis did struggle with Coakley’s boxing. As a natural pressure fighter, Mouzakitis prefers to sway his hips and head backwards rather than moving his feet and giving the opponent space back which he hastaken for himself. Coakley used throw away shots (like a half hearted jab) to which Mouzakitis would sway away from. Coakley would then step in and commit to a more powerful cross. The Greek, with his base out from under him, couldn’t lean back any further or supply a guard. Whilst this seems simple, it does bear thinking about after we saw Carrillo getting tagged when backing up on straight lines.

For Carrillo, one of the keys would be to break off at an angle if he is going to pull back to prevent Coakley following him with stepping crosses. With such a tendency to throw powerful shots earlier, it might also do Carrillo well to put his stamp on the fight as early as possible. If he can lay down some powerful shots across the bow of Coakley, it would discourage Coakley from trying to swarm early. It will also be interesting to see how Carrillo’s feints work into his game plan. If he can get Coakley biting on the fakes and worry him with his powerful switch kicks, it could prove to be a chess match of a fight.

The clinch will be interesting as well, with Coakley preferring to keep his right elbow high and almost at an angle then driving into the side of the head. His elbow caused Jack Kennedy to be stopped in their bout thanks to the severity of the lacerations. Whereas Carrillo has not spent a huge amount of time in the clinch in the course of his career.

For Coakley, he might try to imitate Mouzakitis and bully Carrillo against the ropes to stifle his offence. As well as his proven knees and boxing into body shots, the Irishman could use his feints to drain Carrillo and take his finger off the trigger. Against Mouzakitis, Coakley used a jab and feinted a step in to get the Greek to show his hand. As Mouzakitis attempted to counter the fake, Coakley stepped off at angle and committed to his real shots. If he can get Carrillo biting at air, it will open more opportunities and potential start to wear on the Scot.

Nico is less experienced but he holds the momentum having fought recently and been on excellent form over his last few bouts. For Coakley, he may have the experience but he also has the losing streak which could give Nico more confidence but also drive the Irishman to new heights. No doubt Carrillo is the underdog on paper, but that does not matter once the opening bell is sounded.