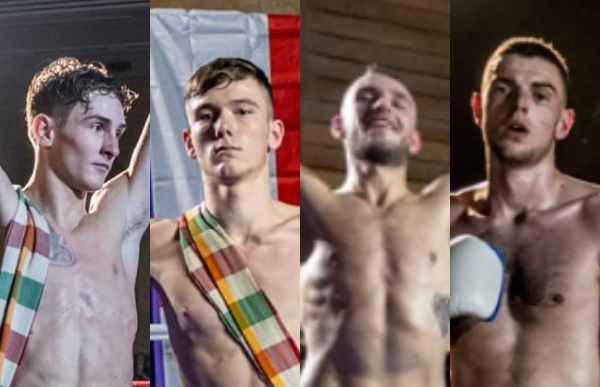 In this article we preview which of the emerging talent, who aren’t yet in the rankings, will be in action around the country this weekend.

Whether experienced as a junior and just starting out in their adult fighting career or very early into their fighting career, the UK have some promising talent who are sure to be well known and competing for places in the rankings over the coming months and years.

As mentioned in our previous article, former ranked Nico Carrillo returns to the ring this weekend to face Alex Dass Rey at Evo Thai Boxing in Glasgow. Under Thai Fighter UK rules, after being inactive for more than 12-months, Carrillo was removed from the rankings.

A win against Spain’s Alex Dass Rey won’t put Carrillo back in the rankings, but will surely solidify him as one of the best in the country at 63.5kg as he looks to claim his British title shot which he earned when beating Welterweight #10 Shane Farquharson back in December 2017.

Nico’s GTBA team-mate, Matthew Bowater, will also be in action on the Evo Thai Boxing fight card this weekend. Coming off two losses to ranked opponents, Bowater will be looking to get back in the win column when he faces another Spanish opponent in Carlos Garcia.

The third GTBA member, rising prospect Paul Murphy, will be in action against another young fighter with a bright future, David Sinclair of Griphouse.

The two Glaswegian fighters have been on a collision course for some time and this match-up has the potential to be fight of the night.

The Griphouse fighter, Sinclair, won gold for Team GB at the Baltic Muaythai Open back at the beginning of February. Despite being just 17-years-old, he then stepped up to senior level and made a huge statement when winning the UKMF Senior Trials just two-weeks later, earning a possible place to represent Team GB at the 2019 IFMA Senior World Championships in Bangkok in July.

His Glasgow counterpart, Murphy, is no easy feat, however. The youngster, who trains with some of the top stars such as Nico Carrillo and Stephen Irvine at GTBA, is known for his strength and technique. Coming off a dominant win over an older opponent at Victory IV in December, will Murphy’s strength prove too much for Team GB’s David Sinclair?

Undefeated in 10 fights, Northern Kings’ Jack Bullock will be up against David Nowak. After five wins in 2018, Bullock has emerged as a force to be reckoned in the Super-Middleweight division.

After taking the leap to begin training full-time at Northern Kings earlier this year, Bullock is looking to take his career to the next level and begin to climb the UK rankings in 2019.

Slightly further down on the card, Jake Allan returns to face EK Fight Gym’s Michael MacFarlane. These two Super-Welterweight hold impressive records and is an exciting addition to the stacked card this weekend.

Unit 5 Muay Thai’s Jake Allan, from Carlisle, used his long, rangy style, clinching and knees to beat explosive K1 fighter Kyle Todd back in December 2017 and will be looking to make a statement again when he returns this weekend.

Not shy of a war, Michael MacFarlane has a 80% stoppage-rate from his wins and will surely be putting Allan‘s chin to the test in a match-up that has the makings of a classic.

Have we missed anyone you think deserves a mention? Let us know in the comments below! Follow us on Facebook and Instagram @fight_record for all the latest updates on all of the above fighters.