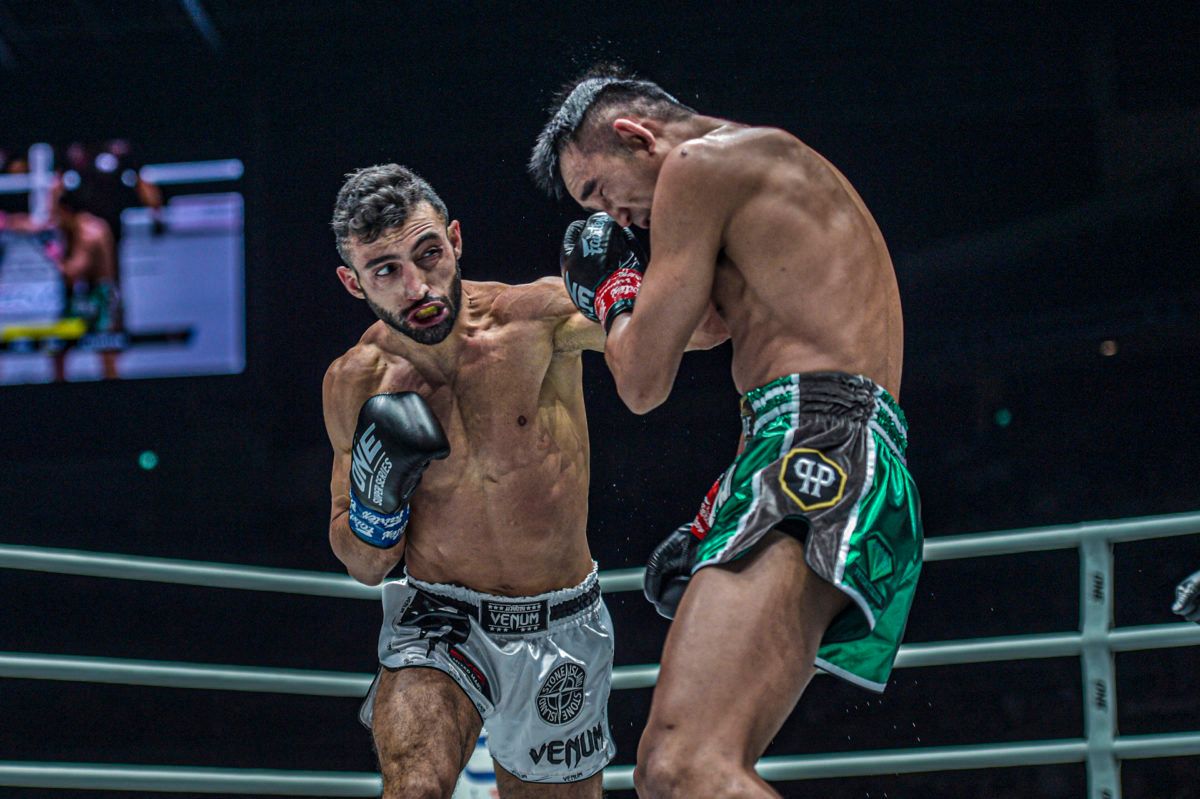 After their controversial first meeting, Petrosyan and Petchmorakot met once more at ONE Championship’s latest event. Whether or not Petrosyan should have had the rematch, The Doctor made significant adjustments which led him to a unanimous victor over the Thai.

As we examined in the build up to this fight, one of the biggest adjustments Petrosyan had to make was to lessen the aggressive boxing combinations he has come to rely on. The forward aggression allowed Petchmorakot to wrap him up in the clinch and nullify his offence. In the rematch, Petrosyan began the bout slower and more measured by using his teep feints and limited forward movement. The Italian also utilised his low kicks to a greater degree which Petchmorakot appeared to have difficulty blocking.

Unlike in the original match, Petrosyan didn’t allow himself to get carried away the huge forward moving combinations. During the first round you can see him begin to shift forward with his boxing before pulling up to avoid clinching. Keeping his base underneath him also meant it was easier to fight off the clinch when Petchmorakot tried to engage.

Petchmorakot began the second round more aggressive, attempting to pressure his opponent and actively engage the clinch. Instead of trying to bully Petchmorakot again, The Doctor instead played more of a matador role. Constantly pivoting around Petchmorakot as stormed forward. Petrosyan utilised an excellent right hook to pivot manoeuvre. This forced Petchmorakot to briefly cover up and prevented him from following Petrosyan as quickly.

The last minute of the second round showed this manoeuvring at its best. When Petchmorakot was able to clinch, it was only for brief moments of time and was not scoring as clearly as he had in the first.

The third round was Petrosyan putting it all together, peppering Petchmorakot with low kicks (sweeping the Thai at one point) and backing up to avoid the Thai’s pressure. The Italian did a good job of throwing single power strikes as he stepped back to give Petchmorakot something to think about. Typically these were either rear (left hand for Petrosyan) uppercuts or right hooks to break the guard through the centre or using the hook to pivot off.

If the clinch was engaged, Petrosyan remained active trying to score with knees. In the previous match, Petrosyan often looked despondent in the clinch which gave Petchmorakot the opportunity to rack up free points.

Regardless of your opinion on whether Petrosyan deserved this rematch in a tournament setting, it had occurred and he made the adjustments he needed and came out the victor in a fairly drama free fashion. Petrosyan will be advancing through to the semi-finals to face Jo Nattawut. Interestingly, Nattawut has already been defeated by Petrosyan so we will have to see what he had learned from their first encounter.